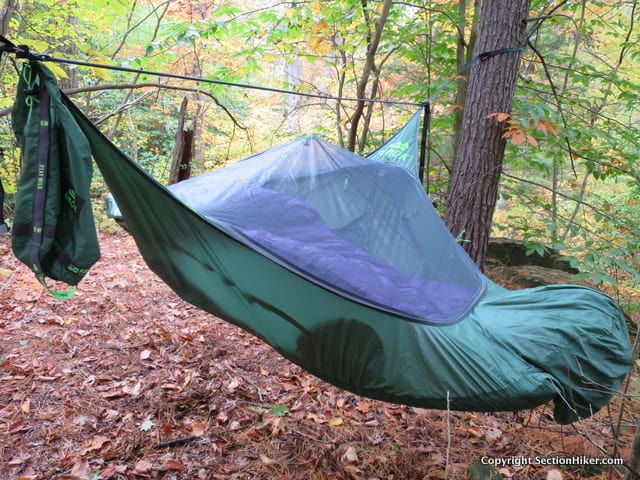 The Amok Draumr is an ingenious hammock shelter system that includes a hammock, tarp, and a complete suspension system, including tree straps, carabiners, reflective cordage, and tent stakes for staking out the tarp. Its signature feature is that its suspension is attached to the sides of the hammock and not at the ends like conventional gathered-end or Mayan style hammock. This makes it possible to set up the Draumr between trees that are closer together and gives the occupant a flatter surface to sleep on.

The Draumr is also unusual in that it requires an inflatable sleeping pad to be used. The pad fits into a sleeping pad sleeve in the hammock to provide back insulation and help stretch out the “cockpit” of the Draumr, which looks like a space fighter when its bug net is deployed. Amok recommends using a large inflatable pad, 25″ wide x 77″ long x 3.5″ thick, although smaller 20″ wide x 72″ long x 2.7″ thick pads are also compatible. However, the sleeping pad should have tubes that are oriented vertically, long ways, like the Exped Synmat Winterlite sleeping pad, shown above. Sleeping pads with horizontal baffles (Therm-a-Rest), dimples (Sea-to-Summit), or chevrons (Klymit) are not recommended.

Before we go further, it’s important to point out that the Draumr Hammock Shelter System weighs 76 ounces (4.75 lbs) which is on the heavy side for backpacking use and more appropriate for camping, where you don’t have to haul it very far. It includes all of the suspension system components, tent stakes, cordage, and stuff sacks, which are fully integrated with the hammock and tarp so you don’t have to scrounge them up yourself – a really nice quality, even if it is heavy.

However, when you factor in the need for a house-sized, high R-value sleeping pad and a top quilt, you’ll be lucky to keep the weight of a three-season shelter and sleep system below 7 pounds. That’s too heavy for me to carry in a backpack up mountains in New Hampshire, but it would be luxurious for car camping or my fly fishing trips where we spend more time in camp relaxing.

The first thing you notice about the Draumr is how quick easy it is to set up. That’s because all of the components are provided and pre-attached (tree straps and carabiners) when you pull the hammock out of its stuff sack, which is also sewn onto the suspension so you can’t misplace it. All you have to do is to find two trees, 10-20 feet apart to hang the hammock from, with the straps angled at 30 degrees, and the bottom of the hammock no higher than 3 feet off the ground. While you can get an acceptable pitch by following these instructions, it’s better to aim for the narrower end of this range with a slightly steeper angle, placing the tree straps as high as you can reach.

The tree straps are held in place using carabiners and you adjust the strap length using a cinch buckle adjustment system which is drop-dead simple to use. There’s a ridgeline connecting the two side wings of the hammock, drip lines, a mosquito net that can be unzipped and stuffed into a pocket if not needed, an interior water bottle pocket, and side mesh pockets to hold smaller items. At the foot end, there’s also a foot box to cover the top of your quilt or sleeping pad and prevent you from sliding out the hammock feet first.

The next step is to inflate your sleeping pad and slide it into the pad pocket at the head end of the hammock. This is a little awkward for one person if you have a colossal pad, but there’s a hole at the other end of the pad sleeve where you can pull the pad through.

Once you’ve got the hammock hung and the sleeping pad inserted, you can fine-tune the lay (where you sleep), to be flat, angled up behind your head, or with a bump below your knees, much like a dentist’s chair. This is all accomplished by pulling on angled straps inside the two wings and best done when you’re lying in the hammock.

Once the hammock has been set up, the hardest part of using it is getting inside. While a diving leap is an option, the hammock has a tendency to swing side to side sickeningly, so you’re better off moving slowly when you climb in. I’ve found the best entry technique is to sit down on the pad at an angle just behind the foot box and lean back while pulling myself in using the ridgeline. Getting out is much simpler: I slide down toward the footbox and stick my feet out to one side, reversing my entry method. I can even get my feet into my shoes before standing up, something I usually can’t manage with my gathered end hammock.

What’s it like to sleep in the Draumr 3.0 hammock? Quite a lot like sleeping on the ground in a tent, actually. There are plenty of pockets and space to store gear that you wouldn’t try sleeping with in a gathered-end hammock. You can get a fairly flat lay if you want (using the side adjustment straps) and the interior of the hammock feels a lot less claustrophobic than a jungle hammock since you’re sleeping on a flat sleeping pad. You can spread out, sleep on your side, or even your stomach if that’s your preference, and there’s no need to fuss with an underquilt.

If you can’t sleep in a gathered-end hammock and want a hammock that’s even more comfortable than the bridge hammocks available today, like the Warbonnet Ridgerunner or the JRB Bear Mountain Bridge hammock, I’d recommend trying the Draumr.  It’s definitely a step up from those two products in terms of living space and comfort.

The Tarp 3.0 (MSRP $139) is included in the Draumr 3.0 complete hammock system, but can also be purchased separately. It’s a 25 ounces hammock tarp with taped seams, pre-attached reflective cordage, line loc tensioners, cord-keepers, stuff-sack, tent stakes, mini-biners, and a non-continuous suspension system that uses webbing straps. If you want to modify the tarp to have a continuous suspension, there are grommets along the ridgeline that provide the ability to replace the webbing straps with lightweight cordage and hardware.

Made with 30d silnylon, the Tarp 3.0 has the dimensions, shown above, where 270 cm = 8.9 ft and 132 cm = 4.3 ft. This is a bit on the small side for this hammock and doesn’t really provide side adequate side protection from blowing rain. It also requires that you hang the tarp ridgeline quite a bit higher than the hammock’s tree straps so that the head and foot end of the hammock don’t bump into the sides of the tarp. This can be challenging if you’ve already placed the hammock tree straps as high up on the trees as possible. Either way, I’d recommend pitching the side of the tarp covering the foot end of the Draumr 3.0 in porch mode using trekking poles in order to slope the foot side of the tarp up and away from the footbox.

In all fairness, Amok does not recommend using the Draumr 3.0 system in stormy weather, but I know I’d want the expanded coverage of a larger tarp like a Warbonnet Superfly.

The Draumr Complete Hammock System combines the comfort of sleeping on a cushy sleeping pad with the convenience of a hammock that can be set up above muddy campsites or uneven ground. Unlike most gathered-end or bridge-style jungle hammocks, the Draumr hangs at a 90 degree to its ridgeline and requires a thick inflatable sleeping pad to provide its occupant with back insulation and a flat surface to sleep on. This is ideal for people who find conventional hammocks claustrophobic and want more interior space. However, while the Draumr 3.0 is quite comfortable to sleep it, it is also relatively heavy, tipping the scale at 76 ounces, not including a sleeping pad and a top quilt/sleeping bag. This makes the Draumr 3.0 less attractive as a lightweight backpacking shelter and sleep system option and more suitable for car camping when it doesn’t have to be carried in a backpack.

Disclosure: This review was sponsored by the Outdoor Blogger Network which provided me with a manufacturer sample for this review.

SectionHiker is reader-supported. We independently research, test, and rate the best products. We only make money if you purchase a product through our affiliate links. Help us continue to test and write unsponsored and independent gear reviews, beginner FAQs, and free hiking guides.
Previous Recipes for Adventure: The Backpacking Chef’s Dehydrated Food Bible
Next CEP Dynamic Compression Socks Win Section Hiker’s Gear of the Year Award