AT Section Hike: Cornwall Bridge to US Rte 7


My work-hike balance has been seriously off kilter the past few weeks, but I got back into the groove this weekend with a 1 night backpacking trip on the Connecticut Appalachian Trail, my first foray into the state.

Spring has arrived in Connecticut and we saw a lot of other hikers on the trail. The snow has long since melted and the forest is just starting to leaf out. The sound of woodpeckers reverberates through the woods, the hawks soar on thermals, the beaver ponds have thawed, and the chipmunks scramble through the dried leaves of last autumn and winter’s blow downs.

I was accompanied on this hike by my friend hikezilla and although we’ve known each other for 15 years, it was our first time hiking or backpacking together. Despite this, I knew he’d make a good hiking partner: we get along famously off the trail and he’s done his share of Appalachian Trail miles down south.

We started our hike at Cornwall Bridge, taking a local taxi to the trail head after parking zilla’s truck up north. Geologically this region is a continuation of the Taconic Mountain Range bordered to the east by the Housatonic River. The trail here runs up and down a series of rocky ridges through mixed hardwood forest, skirting past small hamlets. While civilization is close at hand, the area is decidedly rural with a mixture of horse farms, well heeled prep schools, country homes and quaint hamlets. 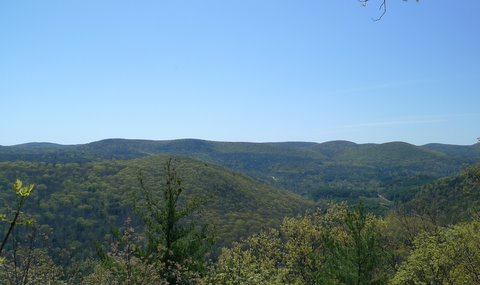 The weather was uncooperative this weekend with temperatures in the high 70’s on Saturday and steady cool rain on Sunday. We lucked out with the bugs however. The black flies have hatched but they weren’t biting and we didn’t have any bugs in camp after dark.


We got on the trail a little past 9 am on Saturday after driving down from Massachusetts and had a stream crossing within the first 100 yards of the trail. Zilla picked his way across the stream wearing boots, but I just walked through the water wearing my a pair of Terroc 330 trail runners.

I am really starting to come around on my migration from leather boots to trail shoes. At first I thought this change was something I was just doing to prepare for my traverse across boggy Scotland, but I may switch over permanently to trail runners for a lot of my hiking when I get back from that expedition. Being able to walk across streams at will and not having to worry about getting your shoes wet is transformative in a way. It’s like hiking in crampons on ice. You feel like there’s nothing that can stop you. 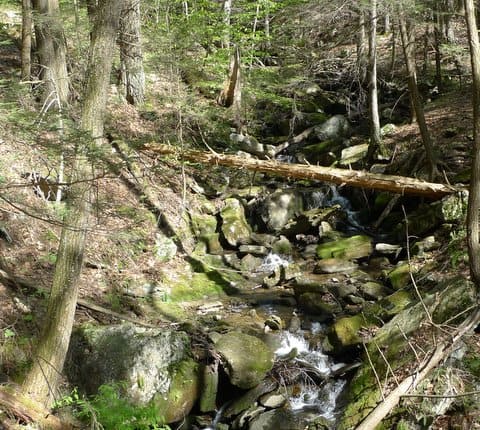 
The rest of Saturday consisted of walking up and down a bunch of big hills all under 2,000 in feet. This was hard work in the hot weather, but this section of the AT has a lot of designated campsites and water sources along the way. In preparation for Scotland, I decided not to bring a filter or purifier along on this trip, only purifying my water using Katadyn Micropur Chlorine Dioxide tablets, which kill bacteria, viruses, and Giardia in 30 minutes (1 per liter). I’ve always carried these as backups to my First Need Purifier, but never as my sole and only water purification method.

In addition, I also left behind my hydration hose, drinking purified water from a plastic bottle and using a 2L platypus hydration reservoir as the container to collect dirty water in and subsequently purify it. Hiking without a water hose required some adjustment because I couldn’t sip whenever I wanted to. Instead, I’d have to stop, take off my pack and and take my water bottle out of my pack’s mesh side pocket whenever I wanted a drink.

This rhythm of drinking, filling, and purifying worked on this section of trail while water was plentiful but when the trail dried up later in the day, I really had to watch my water consumption along a 5 mile stretch before we reached our destination. On hindsight, I am going to add another 2L platypus reservoir to my pack so I can carry extra capacity when I need it. In the past, I’ve always carried two 3L reservoirs, but that’s been overkill. 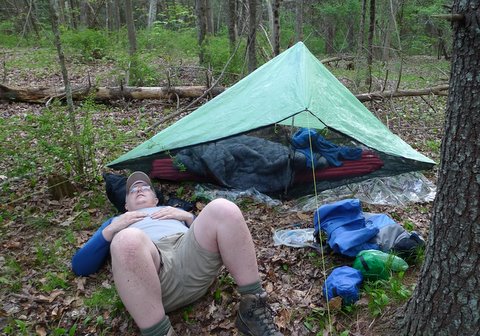 The Duomid and the Hexamid


After hiking 11 miles in the heat with 2,000 feet of ascent, zilla and I were beat. We ended up camping just above our takeout point on Belter’s Bump. The main campsite had been taken over by 30 kids and their leaders, so we made a stealthy campsite deep in the woods.

Zilla had borrowed my Hexamid for this trip to experience a sub-pound shelter, while I camped under my 13.8 oz cuben fiber Duomid. This was my first night under the Duomid and I wanted to work out how I’d be using it in Scotland. The weather participated spectacularly for this by starting to rain in the middle of the night. 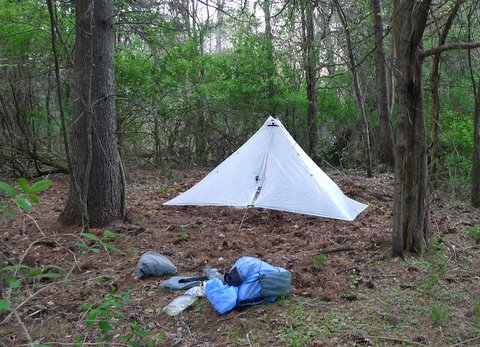 We both found nice sites covered with a 6 inch layer of pine needles, pitched our tarps, and set up our sleep systems. zilla is a Big Agnes fan, so he inflated his Aircore sleeping pad and proceeded to get horizontal. While he faded in out and of consciousness, I invented the optimal set up technique for inflating my Thermarest Neo inside a bivy sack. The key to this is to unroll the sleeping pad in the bivy sack first and spread out your sleeping bag on top of it before you inflate it.

They’re really good and taste a little salty, which was welcome after such a hot day. I also threw in an ounce of Olive Oil on bring up the calorie count and add a little flavor. But what I didn’t expect was the volume of noodles that you get with a single serving! I ate a lot of noodles last night and have a feeling that they’re going to become a favorite comfort food for the trail this year.


This was a good season opener and I’m glad that I was able to go hiking on it with zilla. He’s a great backpacking partner: he doesn’t mind hiking alone if we get separated, he’s got a long of experience camping out on the AT, he’s a great story teller, and good guy to talk too.

With Scotland just a few weeks to go, it also gave me a good chance to do some more gear testing and figure out some minor  adjustments to my hydration system and pack organization that I want to still make before I leave. Endurance wise, I’m also feeling pretty good and believe I’m ready for a 15 mile daily pace in Scotland on the TGO Challenge.