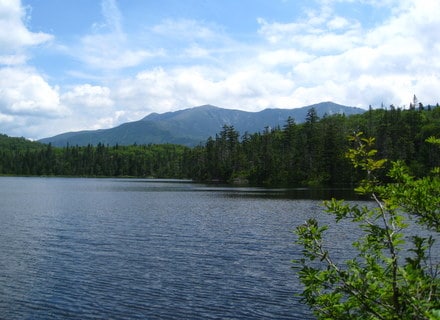 My friend Chris and I drove up from Boston on Saturday morning to hike a short section of the AT up on Kinsman Ridge, just west of Franconia Notch. This was another one of those sections where I got to hike 10 miles in order to get to and hike 5 more miles of the Appalachian Trail in New Hampshire.

We started at The Basin, one of the trailheads in Franconia and started climbing up to Lonesome Lake via the Basin Cascade Trail. This is a beautiful trail that parallels a series of cascases and waterfalls for most of its length. The last time I was on this trail was about 2 years ago when I summitted North Kinsman (4,293 ft.) and South Kinsman (4,358 ft.)

The Kinsmans are one of the hardest climbs in the whites, despite being just over 4,000 feet in height, because the ascent is very steep, the trail is choked with tree roots, and there are several stream crossings along the way. Chris is a very short woman, and she had a tough time navigating some of the crossings yesterday since she doesn't have the reach that a person with longer legs has. But once she got her boots off, she was fine.

When we got to Lonesome Lake, we popped into the AMC hut there and had a bite to eat. This is one of the larger huts in the Whites and it has 4 buildings, including a large public room and kitchen. I don't think I'd ever stay in one of these if I was by myself, but they're nice to pop into, get away from the bugs, and to top of your water bottles with potable water.

From there we headed north on the Fishin Jimmy Trail, which actually heads south towards Georgia on the AT. This trail started out easy and got progressively more difficult, going nearly vertical toward the end. It links Lonesome Lake to Kinsman Pond (4,000 ft), and ascends 1,000 ft. in the last mile, my definition of steep.

However, for once heading southbound on this section of the AT paid off since the hiking is much easier going up to Kinsman Pond than descending from it. We encountered a lot of water on the trail, including wet slab. In places, trail maintainers had bolted wooden steps to the rock face because it was so steep. Chris is an ice climber so we chatted away about how much fun this stretch would be to do in winter. 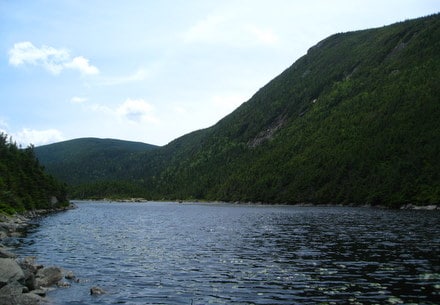 When we got to Kinsman Pond we took a break on the shore, had a bite to eat and caught some rays. Thru-hikers hiking north will summit South and North Kinsman before descending a few hundred feet to the pond. Since I was last here, a new shelter has been built, replacing the old one which was falling down. 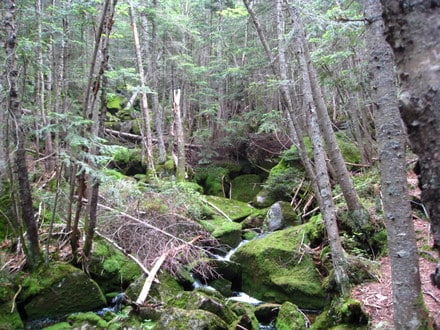 From Kinsman Pond we hiked back down to Franconia Notch via the Kinsman Pond Trail and the Cascade Brook Trail: the latter of which is the AT again. The Kinsman Pond Trail is really a gem. I call it the witches forest. The trail runs down a stream bed, full of rocks and water for about 2 miles, and you need to hop from one wet rock to another all the way down. Trees and tree roots press in from all sides, making it rather spooky if you hike it near sunset. Chris had never been on this trail or the Basin Cascade Trail we has hiked on the way up and I knew she'd enjoy both of them.

After we got down the Kinsman Pond Trail, we picked up the pace and race walked down the Cascade Brook Trail which is a surprisingly easy hike down to Franconia Notch. From there we hiked back to my car, just before thunderstorms blew into the area. Good timing, I'd say.