After spending the past few months section hiking the AT in New Hampshire and Maine, I did a big section down in southwestern  Massachusetts on Wednesday, finally finishing the state.

As usual, I got off to an early start, sneaking out of the house at 5am (we're visiting relatives for Thanksgiving in Western MA), and drove down to the Great Barrington area for a dawn start. I got lost a few times trying to find the trail head I wanted, straying into NY at one point, but eventually found it on a dirt road.

The Appalachian Trail in this area runs through the Taconics, a north-south range that extends into Massachusetts from Connecticut and continues as far north as Vermont. It is distinct from the Berkshires, which are located farther to the west.

I parked my car in the middle of the section I needed to hike, half way between Guilder Pond, which is just north of Mt Everett, and Sheffield on Rt 7. I wasn't sure how much of the 8.5 miles (17 miles round trip) I'd be able to finish in the waning November daylight and I wanted my car handy in case I ran out of light.

I started my hike by climbing Jug End (1,750 ft) up to Mt Bushnell. This is a very steep ascent up from the Housatonic River valley, made especially treacherous by wet leaves and slick rock. It's so steep that there are actually switchbacks on the AT, which are pretty rare in Massachusetts, Vermont, and even New Hampshire.

I hadn't had a chance to carbo-load with my usual breakfast, and really felt it during the 1,000 ft climb. However, I slogged my way up and was rewarded by fine views of the river valley to the north, despite low lying cloud that occluded the ridge above me. 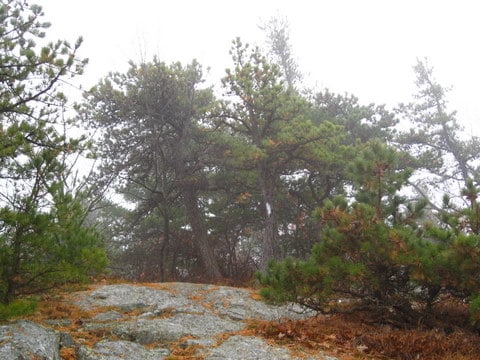 From Jug End I hiked along the ridge gradually gaining elevation to the summit of Mt. Bushnell (1,800 ft), passing though scrub and pitch pine. This ridge must get it's share of lightning strikes judging by the fire resistant species that live here.

I continued on, passing a blue-bazed spur called the Elbow Trail and side trails to the Glen Brook and and Hemlock Shelter, before coming to the Guilder Pond picnic site. It'd been about 2 years since I stood at this very spot, after descending a very icy Mt Everett. 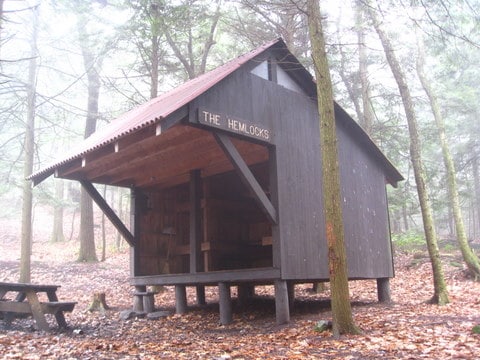 I stopped briefly and then turned back towards my car, after deciding to inspect The Glen Brook and The Hemlocks Shelter on my way back. These are both uncomfortably close to a road for my taste.

The Hemlocks is a big lean-to with built-in bunk beds and a loft. I couldn't find the Glen Brook Shelter but I did see a lot of tent platforms running off the blue blaze side trail leading to it. It is clear that a lot of people camp at these two sites, and if I had to hazard a guess, both were built to mitigate the impact of many people camping outside of the designated areas.

Shelters are worth a visit, but I don't usually linger at them. I got back on the trail and headed north to my car, stopping briefly to refill my platypus at a stream and eat a small lunch of crackers, hot sausage, and peanut M&M's: gourmet trail food!

I arrived back at my car at 12:30 pm. There were just under 4 hours of daylight left and I decided to see if I could hike the remaining 4.2 miles of this section by 2 pm before having to head back to the car. 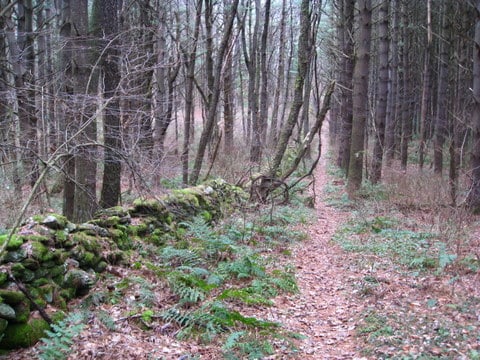 The character of the AT, south of the Jug End cliff changes dramatically from here, starting out as forest, then turning into marshland and finally farmers' fields.

It's hunting season on this section of the AT, so I was a little wary hiking it, making as much noise as possible and clicking my poles on rocks and singing nonsense songs in a loud voice. Funny, these are the same things I do when hiking through blueberry patches in the Catskills to announce my presence to bears! 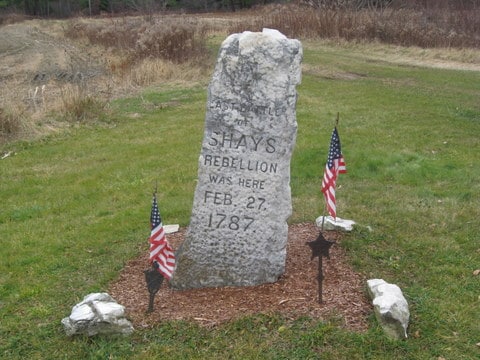 It started to rain as I reached the Shay's Rebellion Monument, which commemorates a revolt by local farmers, crushed by taxation, who rebelled against the Massachusetts government in 1787.

I made exceptionally good time, hiking the 4.2 miles to Rt 7 and the Housatonic River in 90 minutes. I passed through a lot of farm fields along the way, which I'm sure helped my pace, and passed a herd of black cows who sounded the alarm, mooing loudly.

When I reached RT 7, the rain had gotten worse, so I did an about face and marched back to my car, arriving just after 3:30 pm. Whatever I'm doing in the gym must be working because I walked over 8 miles in 3 hours with a pack. I have to try some more of this flat trail again!

During this 17 mile hike I passed just 5 people, 2 parents with their young children, in the parkland near Shay's Monument. Other than that, the landscape was empty, in that lull just before Thanksgiving.