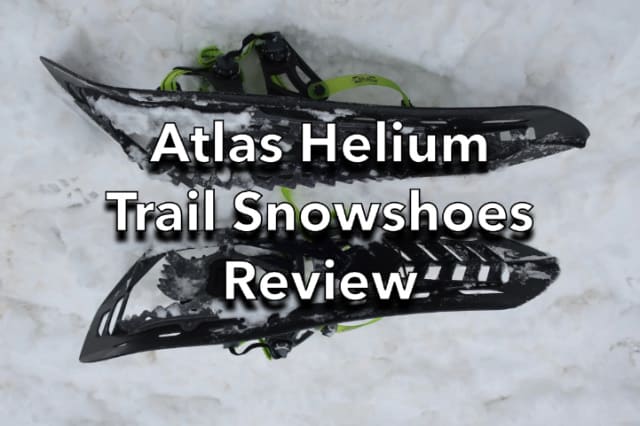 The Atlas Helium Trail ($140) is a lightweight and surprisingly inexpensive snowshoe designed for use on rolling hills and easy terrain. It has great traction and an easy-to-adjust webbing-based binding system that is compatible with most winter hiking boots. The Helium Trail Snowshoes also come with heel lifts (televators) which make climbing hills easier and are not usually found on less expensive snowshoes.

But the Helium Trail Snowshoes have one fatal flaw that prevents me from giving them a blanket recommendation. The webbing strap in the binding is cut where it rubs against the traction rails, which can lead to a catastrophic failure of the binding. I detail this issue below and illustrate it with a video.

While the Atlas Helium Trail Snowshoe is an impressively lightweight and functional piece of gear, the webbing-based binding is flawed and will fail when the traction rails cut through it with use.

Snowshoes are heavy, ranging from four to five pounds per pair, depending on sizing. But the thing that sets the Helium Trail Snowshoe apart from other makes and models is the fact that they only weigh 3 pounds and 5 ounces, which is an astonishingly low weight for a 23″ snowshoe. The 26″ snowshoe, which I’ve been using for the past 4 weeks, weighs 3 lbs 8.4 oz per pair.

While they are lightweight, I was also intrigued by the webbing-based binding system which looked much easier to use and apt to stay closed than the ski strap bindings on the MSR EVO Ascent Snowshoes that I usually wear. Those are also great snowshoes, but they’re heavier, shorter in length and their bindings have a tendency to pop open at awkward times.

Atlas also offers the Helium snowshoe with two different binding systems. The Helium BC Snowshoe is nearly identical to the Helium Trail except that its binding uses a stretchy ski strap instead of one made from webbing, while the Helium MTN Snowshoe has a Boa-based binding system. I’m not a huge fan of either of these based on past experiences with ski strap binding (as described above) and Boa bindings, which are very bulky and make it difficult to strap snowshoes to a backpack when not in use.

The Atlas Helium Trail is a teardrop-shaped plastic snowshoe with a front crampon and side traction rails. The front crampon is made with tempered steel while the traction rails are made with aluminum to help reduce weight. The Helium has a televator heel lift, which you can flip up to reduce calf strain when climbing hills. This must be done by hand since there’s no other way to grasp the televator wire, but a good whack with your trekking pole handles is enough to flip them back down when they’re no longer needed.

The plastic decking is surprisingly durable and has a lot of flex in it when you step on obstacles like rocks or small ledges. Louvers (angled slits) cut into the surface of the decking keep the deck flexible while shedding powdery snow. I consider the flotation good, but not extraordinary for a 26-inch snowshoe.

The Helium Trail’s front crampon provides an excellent bite in ice, hard snow, and mixed rock and snow for hill climbing, but the side traction rails are not that impressive when side-hilling on crusty snow. The Helium MTN and Helium BC models have slightly more aggressive front crampons, but I doubt the difference is that material.

The Altas Helium Trail has a simple webbing-based binding that you pull up to tighten making it super easy to use. It also stays properly tensioned when in use. The binding is “handed” so you must put your right foot into the right-hand snowshoe and your left foot into the left. An “R” and a “L” are embossed in the bottom of the binding although they’re hard to see.

The webbing strap has some slack in it but there’s a small plastic clip that you can snug the extra length into to keep it from flopping around when you’re snowshoeing. I’ve found that the extra length does not catch on passing vegetation, even when snowshoeing off-trail. This had been one of my chief concerns with these snowshoes, but it hasn’t been a problem.

In addition to the webbing, a ski strap is used to lock your heel in place. If you don’t use the heel strap, your heel and boots won’t track straight or level, making it much harder to walk. The heel strap has holes punched into it and is held in place by a buckle with a little metal nub…exactly like the one on MSR snowshoes that comes undone frequently. The heel strap is also lower quality and has less elasticity than a proper ski strap making it hard to get a tight fit that stays secure. But that’s not the big showstopper with this binding, just an annoyance.

I encountered this defect because I wear a pretty chunky winter boot (The North Face Chilkat 400 II, size 11), but it might not be an issue for people with narrower footwear if there’s enough clearance between the webbing strap and the traction rail teeth to avoid any friction between the two. Still, it’s a design flaw that really should be fixed by Atlas. It really is just a matter of time before the webbing strap is cut straight through.

When I contacted Atlas support about my cut webbing, which occurs on both my left and right snowshoes, they offered to start a warranty process and replace my snowshoes. I declined because 1) the problem would just recur with a replacement set and 2) the Helium Trail is out of stock everywhere and they don’t expect a shipment from China until next autumn or winter. Instead, they advised me to return them to REI, where I’d purchased them for a refund.

If I worked at Atlas, I guess I’d be a little bit more concerned about this design issue than they were. Granted it might only occur with larger size boots and not smaller and more narrow ones, but it could be easily fixed with a minor modification to the way the webbing is attached to the binding. You or I can’t make that modification though – it would have to be made in the factory.

Snowshoes are an essential piece of winter hiking gear and they have to be durable and reliable. While the Atlas Helium Trail Snowshoe is an impressively lightweight and functional piece of gear, the webbing-based binding is flawed and will fail when the traction rails cut through it with use. I’d also caution you to avoid the Atlas Helium BC Model which has a nearly identical binding but uses a flexible plastic strap instead of a webbing strap. The Boa binding on Atlas Helium MTN Model does not come in contact with the traction rails and a safe bet, although one that is much more expensive than the Helium Trail reviewed here.

Disclosure: The author owns this product.

Editor's note: If you’re thinking about buying gear that we’ve reviewed or recommend on SectionHiker, you can help support us in the process. Just click on any of the seller links above, and if you make a purchase, we may (but not always) receive a small percentage of the transaction. The cost of the product is the same to you but this helps us continue to test and write unsponsored and independent gear reviews, beginner FAQs, and free hiking guides. Thanks and we appreciate your support!
Previous Jetboil MiniMo Backpacking Stove Review
Next Gossamer Gear’s “The One” Ultralight Tent Review