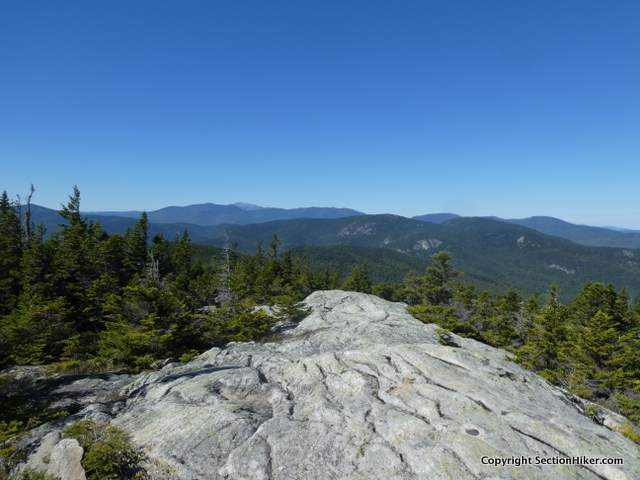 Most of my backpacking trips this year have turned into guidebook chapters for Backpacking the White Mountain 4000 footers, instead of personal trip reports. But my latest backpacking trip through the Caribou-Speckled Wilderness doesn’t have what it takes to be a guidebook chapter. While scenic and wild, the route passes through some areas of logging activity that are pretty unattractive. There are also sections of trail that are very hard to follow, essentially bushwhacking, that I really wouldn’t want to recommend to the uninitiated. I had fun, but this isn’t the type of backpacking trip most people have in mind when they follow guidebook routes.

This trip started at Brickett Place in Evans Notch, a historic home and landmark, that serves as the Bickford Brook Trail parking area and trailhead. It’s just a few feet north of the Maine/New Hampshire border: this entire trip took place in the Maine portion of the White Mountains.

The first part of my route climbed Speckled Mountain, the site of an old fire tower, which has a great view of Mt Washington and the Maine peaks on a clear day. From there, I followed the Red Rock Ridge Trail east to Miles Notch, then north to the West Pleasant River, and then west back to Rt 113, which is the road that runs through the center of Evans Notch.

Here’s a map of the route. This is a georeferenced PDF created using Caltopo. You can navigate with it using an app like Avenza (directions here) or just print it out. Speckled Mountain Haystack Notch Backpacking Loop

It was a cool day as I started hiking up the Bickford Brook Trail, dressed in a wool sweater. Temperatures have already dropped into the 30’s at night. The autumn leaves are just starting to turn in Evans Notch, but they’re still not far along, with some yellow, but still mostly green. After months of weather in the high 90’s, it felt weird to be hiking again in cool and dry weather. I like it, but I do wish we had a few more warm days left before the deep freeze closes in.

I reached Speckled Mountain in about 2.5 hours (4.3 miles) and had a snack, sitting down among the summit rocks to get out of the brisk wind. The sky was a deep blue and I could see the weather towers on Mt Washington, probably 30 or 40 miles away. I’d hoped to top off my water bottles at the spring below the summit, but it was full of nasty looking stagnant water and not running. I still had a liter left and decided to hold off on refilling until the Great Brook Trail, about 2 miles farther along the ridge, which has a stream just below the trail junction.

From Speckled Mountain, I descended the Red Rock Trail which runs for 5.6 miles to Miles Notch. It’s a roller coaster of a hike, up and down, through scrappy woods and across a few open alpine areas. When I arrived at the Great Brook Trail junction, I turned and descended the trail a short way to filter some water.

That done, I hiked another 3.4 miles to Miles Notch turning north onto the Miles Notch Trail. This trail has two parts, a woods part, and a stroll down a logging road that’s marked with pink flagging tape. It’s in a pretty remote part of the Whites, and this being last September, I was a bit wary about running into a bull moose. The big males get very territorial during mating season So I was singing loudly as I hiked, ditties from the 60’s, in my terrible singing voice.

Just then an enormous bull moose crashed through the trail about 100 yards ahead of me. He had a big rack from what I could see as he crossed the trail, before he disappeared up the hill and into the forest. Well, you better believe I kept singing after that!

I soon met another hiker named Peter. He carried a heavy camera and got all excited when I told him about my moose encounter. We chatted for a while and then parted ways. I reminded him that it was moose mating season.

The forested part of the Miles Notch ended and the logging road portion began. It is covered in grass with a barrier of bushes and trees on either side. Not the best place for a while animal encounter, I thought. I kept singing. I followed the flagging, but also knew where I was, since I’d been down this trail before a few years ago.

If you follow the flagging through this portion you’ll be fine. It leads to a big field, also the site of logging activity, and ends at a T junction. There’s normally a sign there pointing to the beginning of the Haystock Notch Trail, but the pole holding it up was broken and the sign was on the ground, pointing in a random direction. I had a fairly good idea of where I was from past experience, but I whipped out my phone and checked my position in Gaia GPSphone app. It’s an easy way to double-check your current position and make sure you’re headed in the right direction.

I turned left and continued following the flagging until I was on the Haystack Notch Trail proper. This trail can be a little tricky to follow. The east and west ends are easy to navigate because they run along two streams (so you know exactly where you are), but the middle part is a very lightly blazed and traveled foot trail.

I hiked about a mile down the Haystack Notch Trail (headed west) and then set up camp for the night. I could have kept going and finished the route in one day, but I was looking forward to sleeping outside (where I sleep the best.) I set up camp, cooked some dinner and was asleep by 9:00.

I broke camp 12 hours later and started hiking west following the West Pleasant River. The trail became harder to follow the farther west I got, although there were periodic blazes. Those completely disappear as you approach the height of land near Haystack Mountain. The trail follows old logging roads most of its length, but there are many intersecting logging roads and herd paths in places, that make it very confusing to follow. The tread is also very lightly trampled, so following the beaten path is often not possible and ill-advised.

There were times when I know I lost the footpath and had to bushwhack through hobblebush, but I found it again soon enough. You just have to pay close attention to the topo map and your compass to follow the trail, although a GPS app can come in handy too. I have a feeling hiking the Haystack Notch Trail west to east is a lot easier to navigate, something that’s been confirmed by other freinds. This is the second time I’ve hiked it in a westerly direction. Maybe next time, I’ll hike my loop counterclockwise.

Once past Haystack Mountain, the trail becomes trivial to follow. It’s well marked and much more heavily used. I reached the unnamed stream at the west end and it was a short walk to the road. I stuck out my thumb and the first vehicle to pass me stopped and gave me a ride.

Editor's note: If you’re thinking about buying gear that we’ve reviewed or recommend on SectionHiker, you can help support us in the process. Just click on any of the seller links above, and if you make a purchase, we may (but not always) receive a small percentage of the transaction. The cost of the product is the same to you but this helps us continue to test and write unsponsored and independent gear reviews, beginner FAQs, and free hiking guides. Thanks and we appreciate your support!
Previous MSR Needle Stake Review
Next 2018 Tenkara Fly Fishing Diary