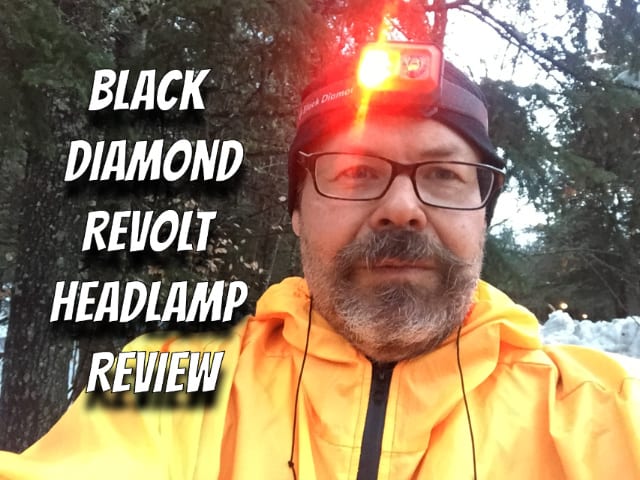 The Black Diamond ReVolt is a rechargeable headlamp that can be recharged or used with AAA batteries. It has multiple white and red lighting models in addition to a dimmer, battery meter, and lock to prevent accidental activation.

The Black Diamond ReVolt is a fully featured rechargeable headlamp that can also be run using regular lithium-ion or alkaline AAA batteries. So-called dual-mode headlamps provide users with a way to ease into the rechargeable headlamp paradigm, which requires carrying a USB-compatible power pack. They also provide a good shit-hits-the-fan fallback strategy if find yourself someplace where you can’t recharge your headlamp or power pack, but AAA batteries are readily available. Weighing 3.5 ounces (100 grams), the ReVolt has a sophisticated set of functions and features including a white and red light, strobe, dimmer, lock, and battery meter. But the ReVolt’s control logic can be difficult to remember if it is used infrequently, which is often the tradeoff in using a richly featured headlamp.

The ReVolt has a single digital switch on top that controls all of the light’s functions and provides access to the light’s white, red, strobe, and dimmer functions. At any time, you can also tap the side of the lamp, called the power tap, which is a short-cut to turn the mode you’re in up to full power. There’s also a digital lock, if you hold the top button down for 4 seconds, something that I think is essential to prevent accidental discharges when packed.

The one function that stands out is the dimming capability which works in both the white and red modes. There aren’t that many headlamps in this class (single strap/batteries housed with the LEDs) that have a dimming capability. Having a dimmer is very useful for close-up tasks like navigating with a map, reading in your tent, or cooking dinner, where less light is much easier on the eyes. But I suspect that it makes the control logic of the unit significantly more complicated compared to simpler headlamps where you can just cycle though a round robin of different modes with single button clicks.

I’ve owned past Black Diamond headlamps where the control logic is way too complicated and hard to remember. The ReVolt is kind-of borderline in that regard. The headlamp does a lot, but the written and graphical documentation included with the headlamp is poor. The best way to learn how to use the ReVolt, for me at lest, is to watch the Revolt instructional video on YouTube. If you carry a smartphone on hikes, I’d recommend taking a picture of the ReVolt documentation for future reference, even if it’s really only good as a visual reminder. In the worst case, you can still get the lamp to work reasonably well if you forget the fine details and start pushing buttons.

The ReVolt includes three AAA NiMH rechargeable batteries that can be recharged while they’re inside the light using a micro-USB compatible cord. Note that Black Diamond locks you into using their proprietary AAA NiMH batteries if you want to be able to recharge the ReVolt. There’s a hack that you can use to bypass this limitation so you can use 3rd party NiMH batteries.

You can also power the headlamp using regular AAA batteries, which is nice if you don’t have ready access to a USB-compatible battery pack or wall recharger. Black Diamond does not recommend or warn against the use of lithium-ion AAA in their documentation, which is kind of odd, but I’ve found that they work well with the ReVolt. They also provide a way to use the headlamp in freezing temperatures, since the Black Diamond does not recommend the use of their NiMH batteries below 32F.

There are still some limitations with the NiMH batteries that you want to be aware off. First off, they’re not as powerful as one-time Alkaline or Lithium-ion batteries and you’ll experience very different light intensities using the ReVolt depending on which batteries you use. For example, if you use the three rechargeable NiMH batteries included with the headlamp, you can expect a max while light lumen output of 175 lumens for up to 6 hours. This is based on Black Diamond’s optimistic published specs…I’ve found the performance to be considerably less. If you use three AAA alkaline batteries, you can expect a max output of 300 lumens for up to 30 hours. The difference is even greater if you only use the minimum light setting of 40 lumens. With the included NiMH batteries you can get up to 30 hours of light, versus 175 hours with alkaline batteries. You can, however, extend the battery life beyond these maximums by using the dimmer feature.

The NiMH batteries also take a fairly long time to charge, up to 5 hours. You also can’t use the headlamp while it’s recharging.

NiMH batteries are also known to lose power very rapidly if they sit around for a while, like 30%-40% per month (REI has a good article about battery longevity). You will probably need to recharge the ReVolt often if you use it with NiMH batteries. I’d go so far as to encourage you to recharge the device after each use and certainly before every hike or backpacking trip you take, even if you use it fairly frequently. Black Diamond suggests that you leave the headlamp plugged into a USB charger when not in use because the headlamp will trickle charge itself automatically for 1 hour, every 24 hours, to make sure it’s fully charged.

The ReVolt also comes with a battery power indicator, which I’m a big fan of on any headlamp. If the meter shines blue, the digital lock has been engaged. If it shines green, the battery is more than 50% charged, if it’s orange, it’s 25-50% charged, and if it’s red, it’s less than 25% charged. I wish the green light only indicated a 100% charge since I think it’s important to know when the headlamp is fully charged.

The ReVolt also has a battery meter, which is different from the battery power indicator. Its function is to signal different error modes, such as improperly seated batteries or batteries that have been discharged too much and need to be reconditioned in a wall charger (not included).

The Black Diamond ReVolt is a dual power headlamp that can be used with rechargeable NiMH (included), alkaline or lithium-ion AAA batteries. In addition to white and night vision preserving red modes, it has a dimming capability, which makes it easier to use for closeup tasks and helps extend battery life. A built-in battery power indicator and digital lock, to prevent accidental discharge, are also premium capabilities that are important for more technical trips.

I think the ReVolt is an excellent headlamp if used with regular batteries primarily, but that there are just too many little gotchas with the NiMH batteries to really count on them for primary use. While NiMH  batteries and a built-in battery charger are included in the headlamp, they don’t provide as much power as non-rechargeable AAA batteries, they don’t work in cold temperatures, and they need to be recharged more frequently between uses. Still, there are use cases where having the NiMH batteries and built-in charger can be convenient and save you money and hassle over carrying spare AAA batteries.

For myself, I’m quite comfortable carrying a rechargeable headlamp with a lithium battery and a power pack. But if you prefer the security of a dual-power rechargeable headlamp that can be also be powered by off-the-shelf AAA batteries, the Black Diamond ReVolt is one of the few quality headlamps available that provide that capability.

Disclosure: The author purchased this product.

SectionHiker is reader-supported. We independently research, test, and rate the best products. We only make money if you purchase a product through our affiliate links. Help us continue to test and write unsponsored and independent gear reviews, beginner FAQs, and free hiking guides.
Previous Fly Fishing the Mad River (NH)
Next Black Diamond Distance 15 Pack Review