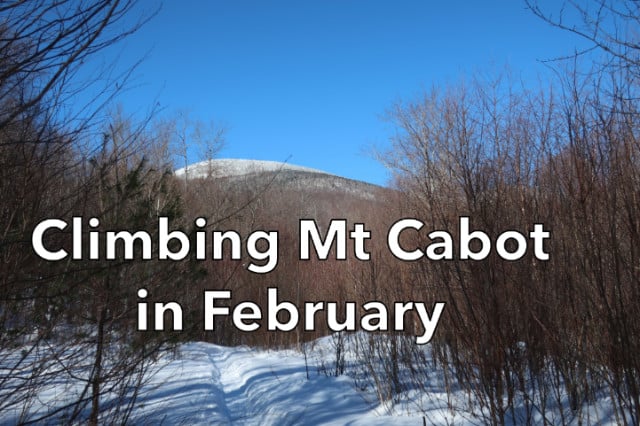 Mt Cabot is the northernmost White Mountain 4000 footer and a 9.6 mile out and back hike with 3,000 feet of elevation gain. With spring on the horizon, I’ve started to wean myself off cross-country skiing and have begun hitting the trail again to work on my conditioning. Snow depths are still too deep for off-trail winter hiking and bushwhacking, so I’ve started hiking the trails leading up to the 4000 footers which are almost always broken out due to their popularity.

We use the term “broken out” to mean they’ve been hiked by other hikers, usually snowshoers, who’ve stamped out a path through recent snowfall, so the trails are easier to hike. It’s one thing to climb a few thousand feet to get to a summit in winter and quite another to do it through 6 or more inches of untracked snow for the first time.

This was my second “reconditioning hike” of the week. Two days earlier, I climbed East Osceola, another 4000 footer just outside of Lincoln, NH on the other side of the White Mountains. That’d been a steep snowshoe up to the summit, which I then glissaded down (slid on my butt) using an ice axe as a snow brake.

The trailhead for Mt Cabot is located inside the Berlin Fish Hatchery, which is run by New Hampshire Fish and Game. It’s a vast complex of holding tanks, ponds, and lakes dedicated to growing trout that will be reintroduced into the wild. It’s also in the middle of a mountainous area called the Kilkenny, which has a number of quite spectacular trails and mountains including Mt Cabot.

I arrived at the trailhead at 9:30 am on a Friday, which is a day I always try to take off for a hike. I hike other days too, but it’s a day that I try to reserve for some special adventure. I started in microspikes because the trail was broken out, but it quickly became clear that I needed more flotation and traction to hike on the unconsolidated powder on the trail.

While I’ve climbed Cabot from multiple directions in the past, the most popular winter route is up the York Pond Trail, the Bunnell Notch Trail, and the Kilkenny Ridge Trail. The York Pond section is quite short followed by a long, but gradual climb up Bunnell Notch, the mountain pass that separates Mt Cabot from Terrace Mountain. The climb gets much steeper when you reach the Kilkenny Ridge Trail, which climbs Mt Cabot, more or less directly.

I switched to snowshoes when I reached the Bunnell Trail and started the climb. After an hour I was overtaken by my friend John and his dog Pepper and stuck with them the rest of the day. I’d actually only met John twice before, both times while hiking, once in the Baldfaces and once on Mt Moosilauke. While we haven’t spent a ton of time together, we’re both White Mountain Guide Finishers so there’s lots to talk about when we run into each other. He and his dog Pepper, a tiny black schnauzer, are hiking legends in the Whites, with an unbelievable number of peakbagging and trail accomplishments to their name.

Pepper, who’s 15 years old, has been having some health issues and was hiking a bit slow on the climb, but I was grateful to have someone else along to set the pace so I tagged along with him and John for the rest of the day. Pepper didn’t say much but John and I had a delightful conversation that touched on a wide range of topics from fly tying and fishing, the accuracy of LIDAR and different datums, the history of his family, his hiking trips out west, and our many mutual acquaintances in the New Hampshire hiking community.

When we arrived at Mt Cabot Cabin, which is an old run-down shed near the summit, several hikers from Rhode Island recognized me and we chatted for a bit. Jim, Elise, and Anne had driven up from Rhode Island to climb Cabot, which gives you some sense of the powerful draw of the winter White Mountain 4000 footers, that people are willing to drive 4-5 hours one way to climb a single mountain.

The door to the cabin was blocked by snow, but if you’ve never been inside, it’s worth the experience. I actually slept inside one night on a backpacking trip, I think in 2010, on one of the bunk beds in the backroom. I was in a bivy sack with a head net, which probably kept the spiders and peeling lead paint from killing me. This hike was my eighth time up to Cabot and my fourth winter ascent.

Together, with another hiker we met, named Grant, we all made our way to the summit sign which is about a 1/4 mile past Cabot Cabin. The snow was quite deep, but the trail was broken out, save for the spruce trap I fell into. After extricating myself, we gathered at the summit sign for photos and ambled about 20 feet further to stand at the true unsigned summit.

After a quick snack and water, John, Pepper, and I headed downhill back to the Fish Hatchery. The downward pull of gravity helped Pepper regain his pep and he took the lead, trotting down the trail with us trailing behind. I often hike solo, but I really enjoyed the company on this hike, and hope I run into John and Pepper again.

Philip Werner has hiked and backpacked over 7500 miles in the United States and the UK and written over 2500 articles as the founder of SectionHiker.com, noted for its backpacking gear reviews and hiking FAQs. A devotee of New Hampshire and Maine hiking and backpacking, Philip is the 36th person to hike all 650 of the hiking trails in the White Mountain Guide, a distance of approximately 2500 miles, completing a second round in 2021. Philip is the author of Backpacking the White Mountain 4000 Footers, a free online guidebook of the best backpacking trips in the White Mountains in New Hampshire and Maine. He lives in New Hampshire.
Previous Gregory Zulu 55 Backpack Review
Next RapidPure Universal Purifier Bottle Adapter Review