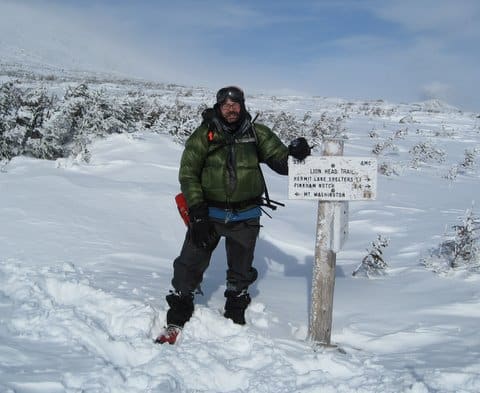 After a week of increasingly alarming weather forecasts, we ended up having excellent weather for our summit attempt on Mt. Washington today. Temperatures were only 10 below zero with winds of 38 miles an hour, gusting to 50 miles per hour. That’s considered balmy in January.

However, despite the good weather, we were forced to turn back just 0.3 miles and 300 feet below the 6,288 ft. summit due to icing on our goggles and glasses that made the final ascent up the icy, boulder strewn summit cone extremely treacherous. Breaking an ankle up here, in full exposure is not worth it, so we about faced and walked back down. Honestly, the climb up to this point was extremely difficult for me and I was pretty close to my limit when we turned back. 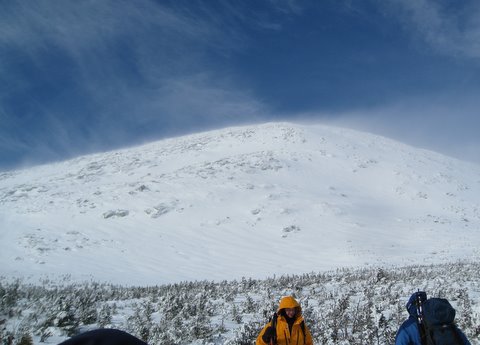 We hiked up today from Harvard Cabin, where we had established a base camp the evening before.This is a very primitive shelter with no electricity, and only a wood stove for heat and propane tanks for melting ice for drinking water. It’s only open in the winter and is managed by a caretaker who lives there during the season. Guests can sleep in the upstairs loft or in a few camp sites behind the cabin.The caretaker works closely with the Mt. Washington observatory and the park service to educate climbers about weather conditions and avalanche danger, which can be quite serious in the White Mountains. 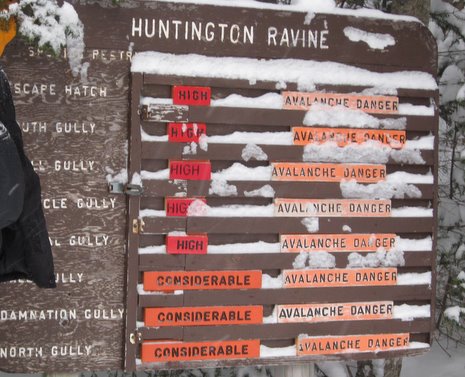 Part of my crew, including myself, elected to sleep in a 3-person tent outdoors, last night, with temperatures well below zero. I was quite comfortable all night in my new minus 25, Western Mountaineering Puma Sleeping Bag and my Exped Downmat 7 sleeping pad, despite the fact that my tent mates kept kicking me all night to keep me from snoring. I slept through it all.

We broke camp this morning at 7:30 am after listening to the Mt. Washington observatory forecast for the day. We had until shortly after noon to make a summit because a snow storm was predicted to come into the afternoon. We climbed up the Lion head trail for about 2  hours in crampons, with ice picks and a single ski pole. This is a steep trail up to treeline and we had to use French Technique most of the way up. It had snowed close to a foot the previous night and we had to kick steps or front point on the really steep sections.

After we broke treeline, the wind really kicked up until we got to the Alpine Garden. We continued to ascend through deep snow up to the summit of Lion’s head. We weren’t exactly post-holing, but it was a close thing, and carrying old-style heavy packs all the way up wasn’t helping. I got stuck with this Robson Pro pack rental from my guide that must have weighed 10 pounds all by itself. It had a million compression straps on it, a detachable fanny pack, heavy padded hip belts, a double liner and a shovel pocket and was really unwieldy.

When we made it to the Alpine Garden, just below the summit cone, the wind moderated somewhat and we were able to make good time. This is a flat area overlooking Tuckerman’s ravine that’s full of krumholz trees that can stand the windy blasts over Mt. Washington. 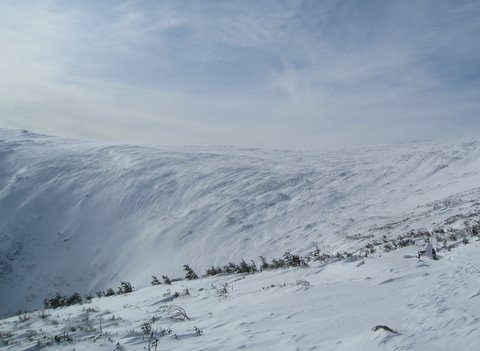 After hiking through the Alpine Garden, we started the final ascent. There was one 5 person party ahead of us, but my the time we caught up with their tracks the wind had covered them up again with drifting snow. The going was difficult at this point and we started to get a bit strung out. I was slightly dehydrated and my water from the previous evening was starting to freeze into a Cytomax slush making it difficult to drink without getting chilled.

Climbing up a steep grade in a foot of fresh snow wearing mountaineering boots with crampons in the howling wind is not at all like normal walking in hiking boots. It’s a completely different movement similar to walking in 5-pound milk crates on beach sand. The crampons are also razor-sharp and will slice through any article of clothing they come in contact with or trip you up if you step on rocks buried in the snow. I pretty much shredded a pair of breathable pants this weekend, which I’ll repair with duct tape and keep for future crampon practice.

We had about 4 miles to get back to the bottom of Washington from the point where we decided to turn around. This was no cakewalk either, but the going definitely got easier once we had the wind at our backs. We descended by the same route we took up, but glissaded down most of the Lion head trail below tree line except for a high degree icy patches that we had to crampon down. Of the four self-arrests I did with my ice axe today, three were performed while glissading.

Although I didn’t make it to the top of Mt. Washington this weekend, I still had a great time in this three-day Introduction to Mountaineering class and learned a lot of basic skills that I plan to practice and build upon on future expeditions: ice climbing, winter camping, self-arrest with an ice axe, glissading, how to walk in mountaineering boots and so forth. I guess I’m a four-season hiker now.

SectionHiker is reader-supported. We independently research, test, and rate the best products. We only make money if you purchase a product through our affiliate links. Help us continue to test and write unsponsored and independent gear reviews, beginner FAQs, and free hiking guides.
Previous Winter Sports Enhancement using Cytomax and GU
Next Outdoor Research Alti Mountaineering Gloves