Feral on the Northville/Placid Trail 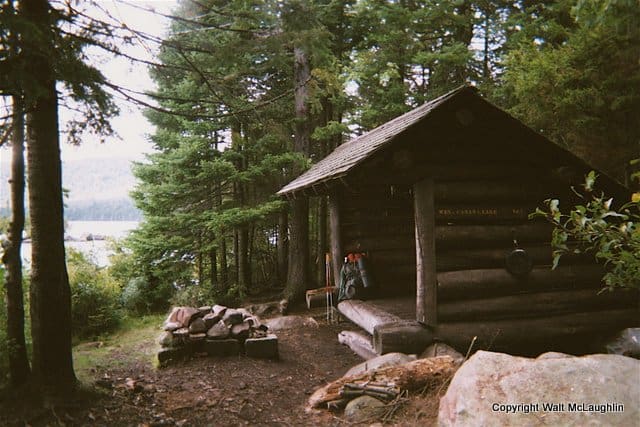 The drizzle that let up temporarily at the sign-in register became a downpour four miles down the trail. I didn’t care. I was glad to be on the move again with a pack on my back, looking at a two-week trek through deep woods. Rain or no, I was going to enjoy being immersed in some of the wildest country east of the Mississippi.

The Northville/Placid Trail is a 125-mile arc through upstate New York, stretching from the southernmost corner of the Adirondack Park to Lake Placid. It traverses four sprawling wilderness areas and a wild forest along the way. The NPT is a lowland trail, skirting ponds, crossing bogs, and meandering for miles on end through mature forests. Most of the thousands of hikers who flock to the Adirondack’s High Peaks Region don’t even know that the NPT exists, so traffic on it is light. That’s what makes it so attractive to guys like me. Yeah, traffic on the trail is very light, especially on the cool side of Labor Day, making a bona fide wilderness experience a sure thing.

Deep in the Silver Lakes Wilderness on the second day, I was reluctant to cross the partially submerged boardwalk spanning a bog. I probed the bog’s dark water with my trekking pole but couldn’t feel bottom. On the other side of it, though, I spotted a northern pitcher plant. That was the first of many wild surprises.

Third day out, I reached the town of Piseco. At the post office there I retrieved the supply parcel that I had mailed to myself “general delivery.” Then I stepped fully loaded into the West Canada Lakes Wilderness. Good thing I was. It’s a 35-mile trek across that wilderness, and another 25 miles to the next convenient place to provision.

I reached West Lake on the fifth day, after crossing a stream below a washed-out bridge and several other watery challenges. Loons and owls kept me company while I hung out there for a day. West Lake was once the home of a hermit named French Louie. It’s obvious why he chose live there. Except for the contrails overhead, there is no indication at West Lake that the outside world even exists.

Back on the trail again, I hiked to Cedar Lakes and beyond. I spent a cold night in a shelter at Stephens Pond, basked in sunshine while approaching Blue Mountain, and enjoyed the company of a fellow thru-hiker, Limps-a-Little, at another shelter the following night. Like me, Limps gravitates to wild places. Together we pondered the importance of wildness. The wilderness movement, which can be traced back to the Adirondack adventures of avid outdoorsmen like Bob and George Marshall, was foremost in my thoughts at the time.

I awoke to steady rain my eleventh day out and road-walked to the town of Long Lake for my second supply parcel. While soaked and sipping coffee in a convenience store, I came close to cutting my trip short. But I was in Catlin Bay lean-to that night, and deep into High Peaks Wilderness the following day. Had I surrendered to convenience store comfort, I would have missed out on the Cold River.

The Cold River, which begins and ends in wilderness, is another one of those places like West Lake that can’t easily be reached. A hermit named Noah John Rondeau lived alongside it for many years. I stopped for lunch in the small clearing where his makeshift camp once stood. I fished the river for brook trout, and walked in the tracks of bear and deer as he once had. I encountered plenty of other hikers at either end of the High Peaks Wilderness, but along Cold River it was just me and the ghost of Rondeau A lucky break to be sure.

Duck Hole is a small lake nestled in the mountains that a lot of backpackers visit during the warm season. I reached it just before a light rain fell. Only a beaver occupied the place when I arrived. Another lucky break. The rain stopped shortly after dusk. The black canvas overhead filled with stars when I went out to relieve myself in the middle of the night. I’ve rarely seen the Milky Way so clearly, before or since.

Just north of Duck Hole, the NPT crosses heavy beaver country. I was worried at first, but reveled in the wild chaos of flooded sections of trail, ribboned detours through the brush, and tenuous beaver dam crossings. Clearly, after two weeks in deep woods, I had gone feral.

My last night on the trail was a grunge fest. By then most of my clothes were wet, muddy, and stinking. My boots hadn’t had a chance to dry out since I had started. I was tired, bug-bitten, unwashed, and feeling every bit of my fifty years. Yet I hiked out the next day feeling utterly alive. It’s like that when you run wild for a while. The countless comforts of modern living are grossly overrated. The creature that stirs within us all needs so much more.

Backcountry traveler, freelance writer, and philosopher of wildness, Walt McLaughlin has ventured into the wilds of Southeast Alaska and New York’s Adirondacks as well as the forests of northern New England. His book about hiking through the Adirondacks, The Allure of Deep Woods, was released in the spring of 2013. You can also follow him at his blog Woods Wanderer.

Previous Osceola Ridge Traverse Attempt
Next The Northern Forest Canoe Trail: In the Footsteps of History