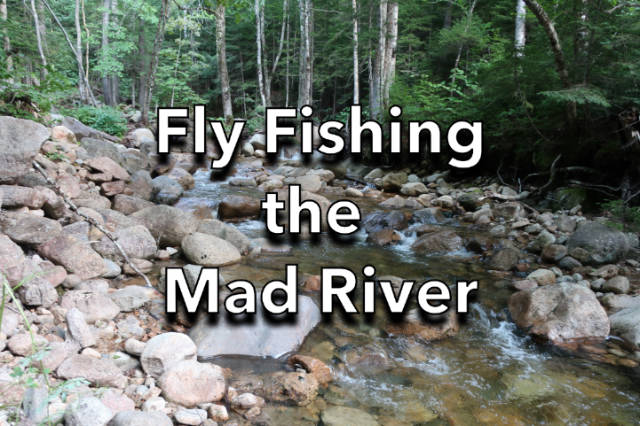 The Mad River is a tributary of the Pemigewasset River in New Hampshire’s White Mountains. I backpacked to its headwaters in Mad River Notch to fly fish for native brook trout using my Tenkara Fly Fishing gear and to explore a new part of the National Forest. This wasn’t a long trip by my usual standards or a terribly taxing destination to get to, but one you can only travel to by foot, which is certainly part of the allure.

I’ve been fishing a lot of backcountry rivers and streams this summer in conjunction with my regular day hikes and backpacking trips, with an eye to writing a Fly Fishing Guidebook for the White Mountains. This is a project that’s been simmering on the back burner for the past few years but is now getting a lot more attention now that I’ve finished a second round of hiking all the trails in the AMC’s White Mountain Guide.

I’ve fished several portions of the Mad River in the past and hiked the trails adjacent to it quite extensively, but on this trip, I decided to incorporate the Kanacamagus Brook XC ski trail as part of my route. There are a lot of XC trails, snowmobile trails, forest service roads, and old abandoned trails in the White Mountains that are not shown on hiking maps that you can incorporate into backpacking routes. They can take you to some interesting places that few people visit. I enjoy the added solitude of these less-traveled routes, especially during the busy summer months when people come to the White Mountains to hike on the more popular trails.

Note: This map isn’t accurate and doesn’t reflect the flood damage that this region experienced in 2011 from Hurricane Irene or the subsequent rebuilding of the trail system. For example, the Flume Brook Trail and Scaur Trail no longer exist.

The best electronic map of the area is the USFS Roads and Trails layer in GaiaGPS which shows the hiking and XC trails I followed, but the GaiaTopo base map still depicts other nearby trails that no longer exist. That USFS Roads and Trail Layer is best viewed in conjunction with the AMC’s Crawford Notch/Sandwich Range Map (2017) available on paper or in an electronic form inside the Avenza Mapping app. I recently wrote about the problem of poor GPS app map currency in my article Why do GPS Navigation Apps Lie?

I parked at the big USFS lot in Waterville Valley and started hiking up the gravel topped Livermore Road, which is one of the main access trails to this area of the White Mountains. It’s an old road that is groomed by the Waterville Valley Ski Resort as an XC ski trail in winter. I turned left onto the Greely Ponds Trail which runs alongside the upper portion of the Mad River and followed it to Goodrich Rock Trail junction where I took a few experimental casts. I caught three small trout immediately. This was looking good.

This section of the river doesn’t have much of a gradient and it runs pretty shallow, never more than two or three feet deep. The river is about 30-40 feet wide here and full of rocks with small pour-overs. While I was happy to find trout, I wanted to keep going upstream to the sections that have a higher gradient.

I continued along the Greeley Pond Trail to the spot where the trail begins climbing to the Timber Camp trailhead. If you bear right, there’s a short abandoned section of the Greeley Pond Trail that you can follow to a spot marked on the map called Knights Bridge, where old bridge abutments are still visible. This is the bottom of the higher gradient section of the Mad that I had planned to explore. There are some deeper pools here but the water is still fairly shallow. Access to the stream is also somewhat challenging because the banks are quite steep. I did bushwhack down a steep slope to the streambed and caught more small trout, but the fishing was pretty boney.

I backtracked back to the Greely Pond Trail and climbed the grade to the Timber Camp Junction before descending down the other side, crossing a small bridge over the Mad River. I then turned right onto the Kanamagus Brook XC Ski Trail which is very lightly used and overgrown. It runs right next to the Mad River, which at this point is more of a brook than a river, being about 15-20 feet wide. While there are a couple of shallow pour-overs you could fish in, this section of the river is full of debris that is likely to rip off your tippet.

The XC trail makes a hard left at 0.7 miles and follows Kancamagus Brook as it climbs up to Livermore Pass. While I’d originally intended to follow it and fish the brook, I continued straight down a short spur trail to the confluence of Flume Brook and the Mad River. The intersection of two streams is usually a good place to fish for trout and that was certainly true here.

While the trout weren’t big, they were plentiful and feisty. It’s difficult to explain the attraction of fishing for smaller brook trout in a rocky, boulder-strewn river. Unlike pond fishing from a boat or shore, you’re moving around a lot, scrambling from place to place, and often dueling with fish you can see, but who won’t take your bait, or who spit it out quickly.

The bait consists of “flies” that are hooks covered with thread, feathers, and animal hair patterned to look like the insects and crustaceans that fish normally feed on. You can now buy pretty good trout flies for $1 each, but I enjoy tying my own and inventing patterns with the tying supplies that I have on hand. The native brook trout in New Hampshire’s streams aren’t picky eaters, so my flies work more often than they fail if they’re presented in an alluring way.

Presentation is where the skill comes in. If I know where the trout are, my main focus is on placing my flies at the correct depth in a stream for the fish to take notice. Flies float at different levels in the “water column” depending on what they’re made with although you can also harness water currents to help position them at the right depth in a stream. Of course, you don’t always know where the fish are because they hide between rocks or under turbulence so they can’t be seen by predators overhead. In that case, you need to be able to “read trout water” and place your flies in the spots where’s they’re likely to lie in wait for food to pass by.

The Mad River widens after it’s joined by Flume Brook and drops about 250′ in the next mile, back down to Knights Bridge. The water gets a bit deeper and there are numerous drops and pools to fish. Access is good, as long as you’re willing to do some bushwhacking alongside the stream and get wet feet. While the banks are lined with trees, overhead clearance is quite good, which cuts down on line and fly entanglements in the overhead vegetation. While you could conceivably fish the upper Mad with a rod and reel, I think this portion of the river really lends itself to a Tenkara setup because you don’t need a lot of reach to fish the pockets and pools.

I fished the confluence for the rest of the day and stopped counting the number of fish caught early on. The brookies ranged in size from 8 inches down to 3 inches and I was careful to release them all with as little trauma as I could. I also use barbless hooks which are quite easy to remove.

I ate dinner along the riverbank and then turned in for a long night’s sleep in my hammock, waking early the next morning for the short hike out. If you enjoy staring at maps, you’ll see that the Waterville Valley area has many small streams that are easy to access. I know I look forward to exploring the area further in the coming years, on foot, and with a fishing rod in my pack.

Philip Werner has hiked and backpacked over 8500 miles in the United States and the UK and written over 2500 articles as the founder of SectionHiker.com, noted for its backpacking gear reviews and hiking FAQs. A devotee of New Hampshire and Maine hiking and backpacking, Philip is the author of Backpacking the White Mountain 4000 Footers, a free online guidebook of the best backpacking trips in the White Mountains in New Hampshire and Maine. He lives in New Hampshire. Click here to subscribe to the SectionHiker newsletter.
Previous Western Mountaineering Hooded Flash Jacket Review
Next Black Diamond ReVolt Headlamp Review