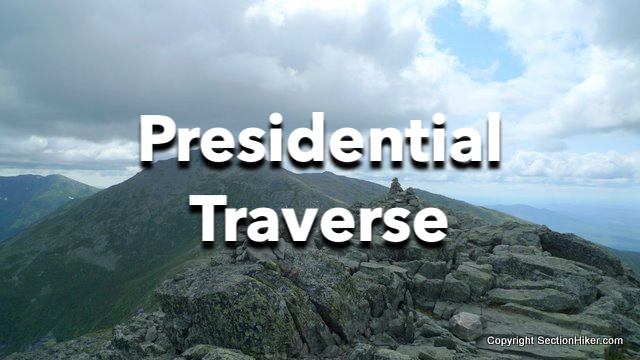 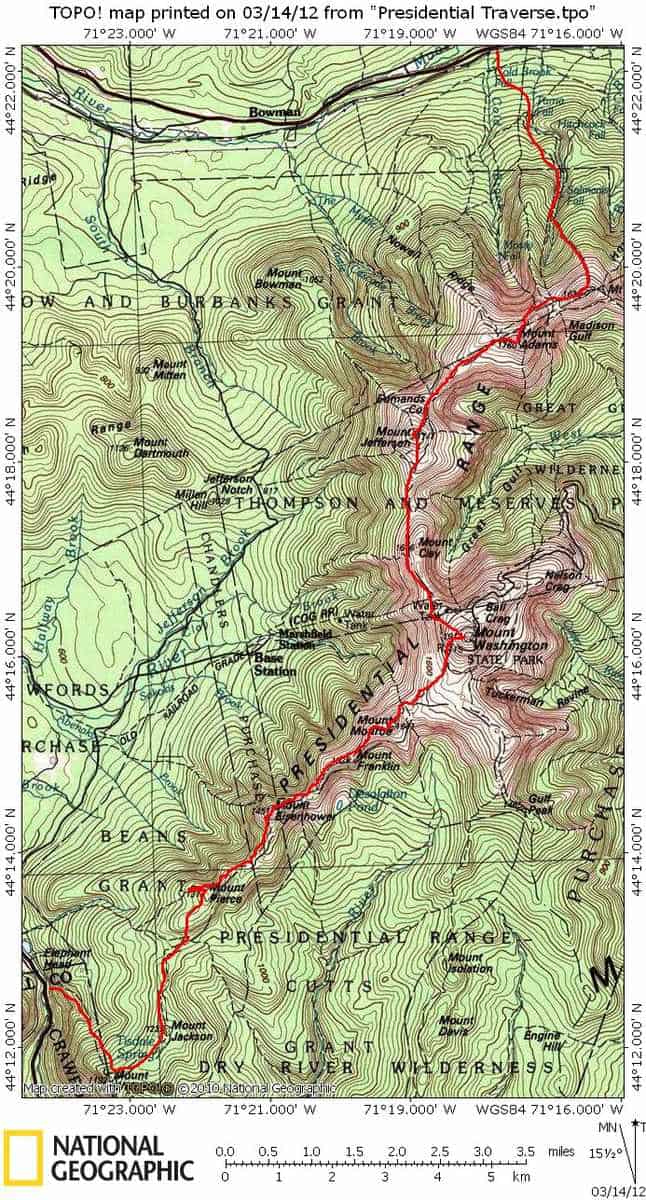 Presidential Traverses are usually hiked from north to south, climbing the following sequence of peaks, in order to get the greatest elevation gains over with early on, with hikers starting before dawn and often hiking into the night.

While most presidential traverses are done in 3 season conditions during the course of a very long day,  it’s also possible to do a traverse over the course of 2 or 3 days. This can be desirable, particularly in winter, when it’s harder to resupply water because you have to melt snow, and none of the huts along the route are open for shelter.

Regardless of the season, a Presidential Traverse is not a hike to take on lightly. Beside being physically strenuous, bad weather, including snow, lightning, hail, and whiteout conditions are a constant threat and one of the main reasons for bailing out part way through. This hike is also almost entirely above treeline (resembling a moonscape), so good compass and map skills are a must.

Hikers normally climb the first peak of the traverse, Mt Madison, via the Valley Way Trail, which is the ‘easiest’ ascent up to the Northern Presidential Ridge, often stopping at the Madison AMC hut to get fresh water and to check the morning weather forecast. This stretch is the toughest continuous climb of the day, gaining over 4,000 feet in 3.8 miles.

After climbing Madison, hikers head south along the Gulfside Trail to Adams and Jefferson. These peaks border a deep valley called The Great Gulf which is bounded by Mounts Clay and Washington to the west and south. After summitting Jefferson, hikers cross a grassy area on Jefferson’s southern shoulder called Monticello Lawn, where there is an enormous temptation to lie on one’s back in the grass and watch the clouds fly by.

Passing Clay (and the popular Jewell Trail bail out route), climbers scale the Mt Washington, the highest peak in the White Mountains which has a world-wide reputation for appallingly bad weather. This is caused in large part by the jet stream, which drops out of the atmosphere onto the top of the mountain, resulting in high winds and cloud, year-round.

Mt Washington has a snack bar at the summit which is open in spring, summer and fall, making it possible to grab a bite to eat and refill one’s water containers. There’s also an auto road and train that runs to the top, making it a busy tourist attraction (and place to avoid), most of the year. Still this can be a good place to bail or resupply if you have friends willing to make the very expensive journey to the top.

After Washington, there is very little ascent left to the trip, but the views along the southern Presidential range are too good to pass up. Leaving Washington, hikers descend by the Crawford Path, the oldest continuously maintained footpath in the United States, passing through a large boulder field to the Lake of the Clouds Hut, where water is also available.

Mount Monroe is just past the hut, with great views into deep Oakes Gulf and the Dry River Wilderness along its eastern flank. Once past Monroe, the miles fly by past Mount Franklin, Eisenhower, Pierce and Jackson. Having good weather or pouncing on it when it arrives is obviously the key to a successful traverse and spectacular views.

A Presidential Traverse is one of the great hikes in the White Mountains, but there are many more.