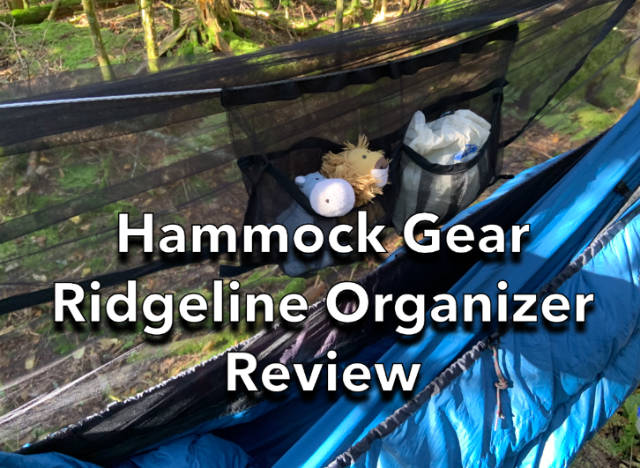 The Hammock Gear Ridgeline Organizer is a multi-pocket mesh gear storage accessory that is compatible with any hammock having a structural ridgeline. Weighing 0.75 ounces, it’s hard to believe that such a small and inexpensive hammock add-on can have such a profound impact on one’s sleep and comfort experience. You could also use this in a tent if you hang a clothesline that you could attach it to.

One of the downsides of sleeping in a hammock is that there isn’t anywhere to store items that you want close at hand at night like a headlamp, cell phone, glasses, tissues, or a small stuffed animal. You can’t store any of this stuff loose in the hammock because it’ll get hopelessly tangled up in your sleep insulation or it will fall out of the hammock when you get out to pee at night, or both!

While a hammock like the Warbonnet Blackbird has a side “gear shelf” built into the hammock body where you can stow stuff, it gets all jumbled together and it’s hard to locate what you want in the dark by touch alone. I owned a Blackbird for five years and while it was conveniently located, that gear shelf was always frustrating to use because you could never find anything amongst all the things stashed there.

The Hammock Gear Ridgeline Organizer has a long strip of velcro on top that folds closed over your ridgeline and helps prevent the organizer from sagging when full. I position it over my chest to keep things in easy reach and leave it attached when I take down my hammock so it will be there next time, ready to go. If you find you need to reposition the organizer, it’s easy enough to slide down the ridgeline, but it won’t change position by itself.

The organizer has four open pockets, three on one side, and a long one in the other. They are deep and sturdy enough that I can stand up an iPhone X tethered to an Anker 10000 mAh battery with a lightning recharging cable in one of the small pockets, and they won’t fall over or fall out of the organizer onto me. I can also put my distance glasses in the organizer at night without a case and I’m not worried that they might fall out and get crushed. I also use it to hold my headlamp, map, first-aid kit, and so on. Actually, I’m a little amazed at how much I can store in the organizer at night since I fill every pocket with something.

The Hammock Gear Ridgeline Organizer is compatible with any hammock with a ridgeline, not just the hammocks made by Hammock Gear. I think it’s a brilliant piece of kit that really enhances the experience of backpacking and camping in a hammock. The fact that it weighs less than an ounce and is priced under $20 is icing on the cake.

SectionHiker is reader-supported. We independently research, test, and rate the best products. We only make money if you purchase a product through our affiliate links. Help us continue to test and write unsponsored and independent gear reviews, beginner FAQs, and free hiking guides.
Previous Backpacking Food: Knorr Rice Sides
Next The North Face Tech Glacier 1/4 Zip Fleece Review