Hiking a Faraway – Roberts Loop in the Ossipee Range 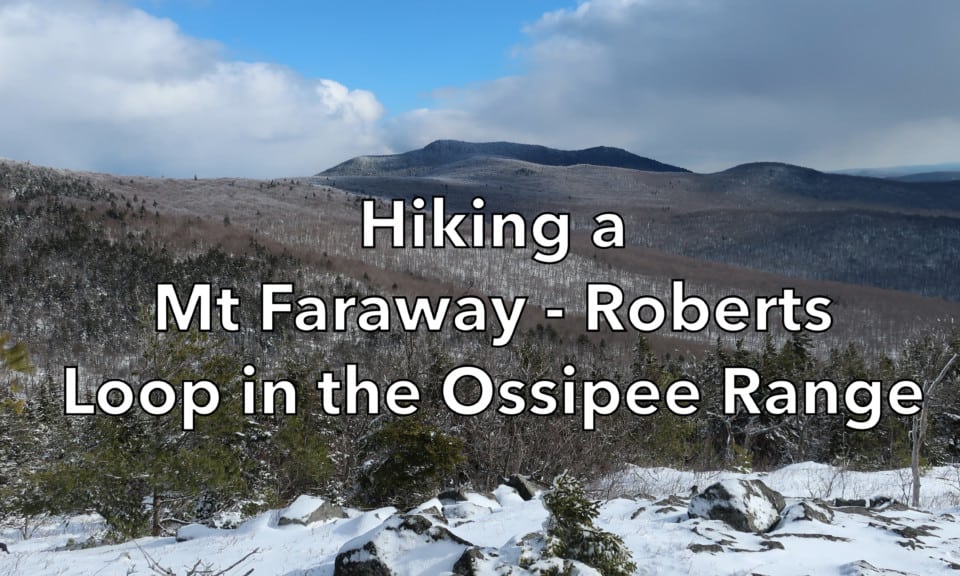 Mt Faraway and Mt Roberts are two peaks in the Ossipee Range in New Hampshire, about 30 minutes south of the White Mountain National Forest. Closer to New Hampshire’s “Lake District”, winter conditions there tend to be a bit milder than up north because the mountains are not as high. Still, it’s a great place to hike with a well-blazed and signed trail system to boot!

Mt Roberts is one of the most popular peaks in the Ossipee’s because it’s on the scenic 52 with a View peakbagging list. Robert and Faraway are on the NH500 Highest List, which is my latest multi-year peakbagging quest. I’d never climbed either before this hike, and I don’t really have much experience hiking in the Ossipee’s, so I was relishing the thought of a new adventure.

This hike starts the trailhead on Ossipee Park Road which has a parking lot and kiosk. There are several ways to hike this loop and it’s not obvious where any of them start since the trails don’t leave from the parking lot. When I arrived, on the day of the Presidential inauguration, there was a surprising number of people starting out at the same time, especially for a bitter cold weekday. None of them had maps or a compass, and apparently, AllTrails wasn’t sufficient to find the proper route.

I hadn’t firmly decided which route I was going to take beforehand, but I decided to hike a different route they would both for social distancing purposes as well as the solitude. I do a lot of solo hiking because I prefer to focus on my surroundings more than on the company. I find that too much social interaction interferes with my memory of what I see, feel, and think on my hikes. Maybe that’s antisocial, but there will be a day when I can’t hike anymore and all I’ll have is those memories.  Writing up my hikes as trip reports and my photos helps me relive my hikes years later, which is why I keep doing it after all these years.

For this hike, I decided to use the Maplets App for navigation, because it has a great map of the Ossipee trail network. Maplets geocodes PDF versions of authoritative paper maps, unlike a lot of apps that base their maps on open source (OSM) or outdated USGS data. It’s a great app for hiking local trail systems and conservation areas that publish their own maps and want to make them accessible to people who prefer navigating with their smartphone. The app costs a few bucks and then the maps are free.

I found the start of the trail system that all those other hikers were looking for by whipping out my compass and by orienting myself to an obvious land feature, a pond, shown on my map. There were a lot of hikers all around me, all headed toward the Mt Robert’s trail, so I decided to do my Faraway-Roberts Loop in the counter-clockwise direction, climbing an entirely different sequence of trails to keep my serenity intact.

I left the mob scene and hiked up a carriage road to the start of the Cold Spring Trail. Both the carriage road and the trail were pretty badly post-holed by hikers who hadn’t been wearing snowshoes when they walked up it, a common problem on winter trails that are easy to access. I’d brought along snowshoes, which made the walking easier since they spanned most of the postholes. I’ve been testing a new pair of 26″ long Atlas Helium Trail Snowshoes this winter, which are exceptionally lightweight, and had wanted to try them out on a higher angle trail.

The Cold Spring Trail and the Faraway Mountain Trail follow what I assume are old carriage roads when they’re not covered by a foot of snow. They run through open forest, switchbacking back and forth like an Escher painting as they climb the 1200′ up to the High Ridge Trail which connects several of the range’s summits, including Roberts, Faraway, Shaw, and Black Snout (South). The snow got deeper and deeper as I climbed by I didn’t see another soul on that ascent which was most pleasant. I turned onto the High Ridge Trail, passing two hikers at the trail junction, who were the only people I saw all day.

The High Ridge Trail was really a mess with 2 foot deep potholes, so my snowshoes were a real godsend on this hike. I continued along to the Faraway spur trail and then headed up to the summit along a much smaller trail that has been lightly broken out, by more postholers. This led to me to a gorgeous open summit which looks like it’d be a great spot for a summer picnic, even though there’s a transmission tower perched on top. I tried to ignore it and made sure all my summit photos omitted it.

I’d been wearing snowshoes right up to the Roberts summit, but switched to microspikes for the descent down the Mt Roberts Trail. It was completely broken out and trampled flat because it is so popular. It’s also a spectacular trail with many great viewpoints along the way. By now it was approaching 3:00 pm and I didn’t expect to see anyone climbing Robert that late in the day, with the sun setting about 4:30 pm still. I wasn’t disappointed and has the trail all to myself the rest of the descent back to the trailhead.

I’ve been doing a lot of off-trail hiking this winter, so climbing these two peaks on trails was quite a welcome break in the action. I have several other mountains to climb in the Ossipee Range and look forward to those hikes and the new places they’ll take me.

Philip Werner has hiked and backpacked over 7500 miles in the United States and the UK and written over 2500 articles as the founder of SectionHiker.com, noted for its backpacking gear reviews and hiking FAQs. A devotee of New Hampshire and Maine hiking and backpacking, Philip is the 36th person to hike all 650 of the hiking trails in the White Mountain Guide, a distance of approximately 2500 miles, completing a second round in 2021. Philip is the author of Backpacking the White Mountain 4000 Footers, a free online guidebook of the best backpacking trips in the White Mountains in New Hampshire and Maine. He lives in New Hampshire.
Previous 10 Best Bug Shelters for Ultralight Backpacking in 2021
Next Big Agnes Tiger Wall UL 2 Tent Review