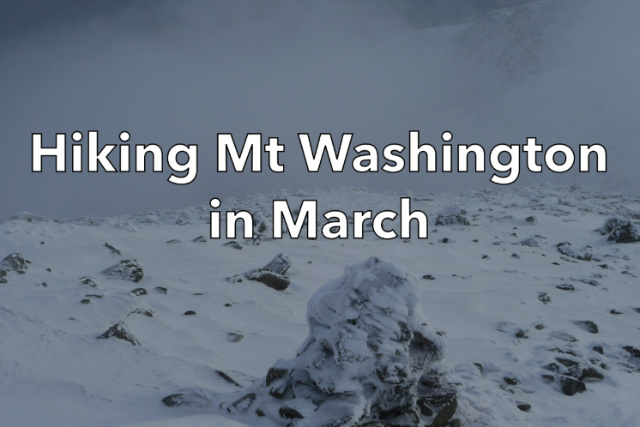 The second half of March is usually a good time to climb Mt Washington because the weather tends to moderate as winter turns to spring. You still need to watch the weather forecast carefully and avoid high winds, frigid temperatures, and storms, but there is a noticeable increase in the number of days where you can safely climb the peak. I know this from experience because I’ve been climbing Mt Washington and the other high peaks in the Presidential Range in winter for over 10 years.

I’m working on this crazy peak list called The White Mountains Grid, where you have to climb all 48 of the White Mountain 4000 footers in each month of the year for a total of 576 summits, although you can spread the effort out over multiple years. One of the last peaks I needed for the month of March was Mt Washington, so I was on the lookout for a good day to climb the peak. I spied a candidate day several days in advance and carefully monitored several different forecasts to see if the weather would remain favorable for a climb.

My wife won’t let me climb Washington alone in winter, which is just as well, because it’s a dangerous peak to have an accident on if you’re alone. My regular hiking partners were either busy or disinterested, so I posted a message in some social media groups I belong to and an acquaintance of mine volunteered to join me. Named Jen, we’d hiked up Mt Kinsman in winter together several years ago and I knew her to be a very experienced winter hiker and fellow gridder.

Jen has a fairly unique history when it comes to Mt Washington since she and her husband, John, were married a the summit a few years ago. Their marriage ceremony was presided over by a mutual friend of ours, named Mike Cherim, who’s a licensed New Hampshire JP and owns Redling Guiding in North Conway. Windows to the Wild, a TV show put on NHPR, broadcast a show about the ceremony and I was looking forward to talking to her about it on our hike.

On the morning of our hike, we met at the hiker parking lot at “The Cog” which is the tourist railroad that runs up Mt Washington. You can park there for $10 instead of the USFS Amonnosuc Trailhead and cut two miles off the climb.

The forecast called for winds in the 20-30 mph range with 30+ degree temperatures, which is unusually warm for this time of year. Recent hiker trip reports (on NewEnglandTrailConditions.com) indicated that the snow surface below-treeline would be slushy with a mix of rock and ice above-treeline. Jen and I decided to err on the side of caution and carry our snowshoes and crampons up with us. Snowshoes are important when the snow gets soft to prevent post-holing, which can be very exhausting, while the crampons would give us traction for walking on ice.

Our first challenge was a water crossing on the Jewell Spur Trail, which Jen and her husband John maintain as volunteers for the Forest Service. I know this trail well because I used to maintain it too, going back a few years. Small world. The main winter snow bridge had been washed away by the recent thaw, but we were able to cross slightly higher upstream on a narrow section over a frozen log and some loose rocks.

We’d put on Trail Crampons for the crossing to get better traction and kept them on the rest of the way up the Spur Trail and the Jewell Trail, beyond that, all the way up to treeline. The snow was wet and slushy, but had enough cohesion that our spikes provided good traction. The day was warmer than forecast and I was down to a baselayer until we hit treeline and I donned a fleece hoodie and a windshirt.

Treeline comes at about 4500′ and there’s a rock there where people often stop to layer up before heading higher. We met a woman sitting there who was lightening her pack by eating some food, in this case, a can of cold baked beans. She was headed to Mt Jefferson which often climbed via the Jewell Trail in winter, as well.

Shortly after, we passed a gentleman named Rod who planned to climb up to the Gulfside Trail junction at the top of the Jewell Trail. We talked to him for a while about climbing 14k’s in Colorado, something Jen has experience doing, and high pointing. I always enjoy talking to people I meet out hiking. There are some real characters out there and Washington draws them like a magnet!

When we reached the Gulfside Trail Junction, we turned right and headed toward Washington. The trail was a combination of bare rock and ice and we made pretty good time. Once we passed Mt Clay, visibility plummeted and we could only see one rock cairn ahead. That was easy when the cairns were large, but the smaller ones are easy to lose in fog amongst all the other boulders on Washington’s flanks. The wind and temperature were still reasonably calm and warm and the direction we needed to go was pretty obvious….up, although between us we had plenty of maps and navigational aids if they become necessary to use.

The visibility dropped as we continued to climb and the wind started to pick up as we approached the summit. We reached the end of the Gulfside Trail and turned onto the Trinity Heights Connector Trail which leads to the summit sign. It’s only 0.2 miles in length. Suddenly a stone building appeared through the fog, which I surmised was the Mt Washington Gift Shop, which is located right next to the summit sign. The wind got quite pushy, but the temperature was still quite warm. We’d made it, and paused to take photos next to the summit sign. There were no views, but that’s just how it goes sometimes on Mt Washington.

There was no point in lingering, so we took off and headed back down the peak, retracing our steps. Once we got off the summit cone, the winds died back down. But the ice that we’d traversed on our way up to the peak had turned to slush in the interim. Then when we were about 500′ below the summit, the fog began to lift and clear.

Mt Clay, Mt Jefferson, and Adams came into view and we could see deep into the Great Gulf Valley below. Looking back at the summit, we could just see the towers on Washington peaking above the horizon, giving us the finger as the sun came out and the sky turned blue.

Back on the Gulfside Trail, my left boot and Trail Crampons got wedged between two rocks and I couldn’t get them loose. It wasn’t dangerous although it could have been in the wrong conditions and I ended up taking the boot off so I could yank it free. From there, Jen and I had a rapid descent down the 4000′ we’d climbed to reach the Mt Washington summit, finishing the hike in just over 6 and a half hours, which was an unexpectedly speedy round trip.

I think we were both surprised at how little snow there is on Washington at the moment, although there are still several feet in the forest below. It definitely feels like spring has arrived a month early, but knowing White Mountain weather, it wouldn’t surprise me one bit if we have another major snowstorm before Old Man winter is through with us.

Mt Washington via the Jewell Trail

SectionHiker is reader-supported. We independently research, test, and rate the best products. We only make money if you purchase a product through our affiliate links. Help us continue to test and write unsponsored and independent gear reviews, beginner FAQs, and free hiking guides.
Previous Do You Need a Tent to Hike the Appalachian Trail?
Next Scarpa Rush Mid GTX Review