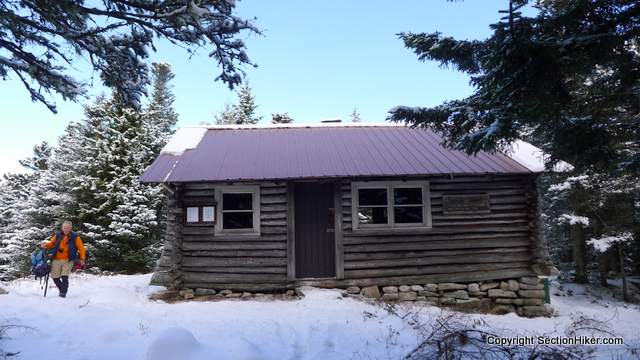 North and South Doublehead are two picturesque mountains located just outside Jackson, New Hampshire, on the eastern edge of the White Mountain National Forest. They’re moderate peaks to climb with special interest to skiers, because one of the trails on North Doublehead is a backcountry ski trail. North Doublehead also has a cabin at the summit that sleeps eight and can be rented for $20/night, from the Forest Service. It doesn’t have running water (you need to melt your own or carry it in ) and you have to gather your own wood, but it has an iron stove inside, bunk beds, a separate sitting room, and tight windows, making it a unique overnight destination for winter hikers.

Shaped like two bells, the Doubleheads have a distinctive appearance. Despite being relatively “small” mountains compared to their neighbors in nearby Pinkham Notch, the steepness of the trails climbing these peaks much be experienced to be fully appreciated. While short in overall distance, the slope gradients rival the highest peaks in the White Mountains, ascending over 1000 feet per mile.

Having climbed the New Path several years ago, I went back for a visit to these peaks recently to finish hiking the up The Old Path and then down the Ski Trail, pursuing a number of different peakbagging and trail hiking lists that I use to amuse myself.

Over the past few months, I’ve been purposely hiking trails that I’ve never hiked before, many to smaller mountains in the National Forest because I prefer the novelty of hiking to new places whenever possible. This has proven to be a wonderful distraction and I often do two separate hikes each Friday to different trail systems or destinations that I’ve never visited.

If you’ve never hiked in the White Mountains it’s hard to appreciate just how many trails there are that you can hike in close proximity to one another. For instance, there are 1440.4 miles of hiking trails documented in the latest 29th edition of the 500+ page White Mountain Guide, and countless more local trail systems, old trails, ski trails, and old roads that one can explore.

Of the three paths up the Doubleheads, I think the Old Path is still the prettiest, but my oh my is it steep and rocky. Not rocky as in ledgy, but the treadway is covered with rocks that require some footwork and minor scrambling to climb. It had snowed a few inches before the day I hiked it, in mid-November, but the footing was still good enough that I could handle the rocky trail without any additional traction.

Upon reaching the col between the North and South summits, I headed over to the top of North Doublehead to check out the cabin and take in the view. Unfortunately, there isn’t much of one from the cabin itself, but there is a view behind the cabin, down a short herd path that runs behind the new outhouse. It looks like the trees have been cut back here to create a view over the ledges, and I could see Mountain Pond, site of a backcountry shelter, through the trees to the east.

I hiked back down to the col and then over to the Southern peak, where there is a large open ledge. I stood there for some time, despite the wind, and took in an excellent view of Carter Notch, with the multiple humps of trailless Black Mountain in the foreground. From here, I hiked back towards the northern peak again, before descending via the Ski Trail, which must require great expertise to ski in winter because it is so narrow and steep. I’m not entirely sure if this ski trail is actually open anymore however, since there are several large blowdowns across the path that look like they’ve been there for some time.

If you just have a few hours and want some vigorous climbing practice, the Doubleheads are a lot of fun to hike. They’re steep enough to make for excellent conditioning hike, especially when the trails get a bit icy and you need to wear heavier traction, such as full crampons, to climb them. I can’t vouch for the ski trail, but it’s narrow and steep, and must make for an exciting run down North Doublehead.

North Doublehead is on the New Hampshire 3000 footer list and the 52 with a View list, although South Doublehead now has the better view.

SectionHiker is reader-supported. We independently research, test, and rate the best products. We only make money if you purchase a product through our affiliate links. Help us continue to test and write unsponsored and independent gear reviews, beginner FAQs, and free hiking guides.
Previous Hunting Season and Hikers
Next How to Use a Sewing Awl to Repair Outdoor Gear