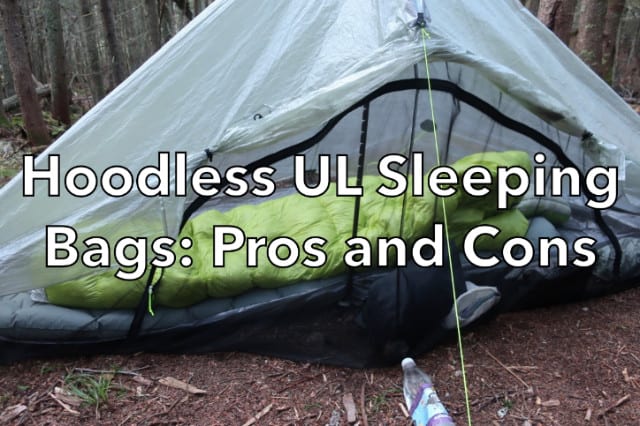 Hoodless ultralight sleeping bags, also called rectangular sleeping bags, share some of the same advantages as backpacking quilts and are a great alternative if you want to switch from a mummy bag to something less confining, but you’re not that enthused about using a (top) quilt.

Personally, I prefer using a hoodless sleeping bag over a quilt when sleeping on the ground because I don’t have to worry about any drafts or fuss with a quilt’s pad attachment system, which I find awkward and claustrophobic.

But there are other advantages to using a hoodless sleeping instead of a backpacking quilt that I outline below.

The nice thing about a hoodless sleeping bag is that there’s no learning curve like there is with a quilt and its pad attachment system. You’re also not dependent on the quality of your quilt’s pad attachment system, which can be pretty dismal if you buy a quilt from the wrong manufacturer.

Most hoodless bags have zippers, so you can open them up and use them like a blanket in warmer weather or unzip them partway to create a footbox like a quilt. Hoodless sleeping bags are sometimes called “quilt-style sleeping bags” by their manufacturers for this very reason. If they do have a zipper, you can usually position it where you want it at night, on the left or right, on top of your body, or underneath you, which gives you a lot of flexibility that’s not available with a mummy bag, because the hood forces you to use the zipper in one orientation.

Hoodless sleeping bags are also compatible with every kind of sleeping pad including inflatable, self-inflating, foam, including grooved Klymit sleeping pads. They’re also a good option in hiker hostels and bunkhouses when you want to avoid coming into direct contact with suspicious sheets, mattress covers, or stained mattresses that have who-knows-what living in them. That’s a lot harder to do with a backless quilt.

Many experienced quilt users add a bivy sack to their sleep system when temperatures drop to 20 degrees or less and drafts from their pad attachment systems become more noticeable. A bivy sack isn’t necessary if you use use a hoodless sleeping bag since it already provides 360-degree protection when it’s zipped up.

Since they don’t have a hood, it’s common practice to wear a fleece cap or an insulated hoodie when sleeping in a hoodless sleeping bag, just like you would with a backpacking quilt.

Some hoodless sleeping bags are available with draft collars to keep heat from escaping around your neck when you move around in cold weather and you can also find ones with drawstring foot boxes, which give you more control over your warmth level through the night. The Feathered Friends Flicker 40, I use has both.

Some hoodless sleeping bags are also available without a zipper, like the Feathered Friends Tanager 20 I own, which can limit their temperature range to cooler weather but helps to cut down on their weight. Some are also available in 3/4 and 1/2 lengths instead of full length and are sometimes called called “Elephant’s Foot” bags because they resemble the lower part of an elephant’s leg. This is more of a mountaineering “thing” that you’d use with a down parka to save weight and gear space on a big climb but it isn’t that flexible for general purpose use.

If you’ve tried to order a backpacking quilt between November and July, either a stock model or a custom-made one, the backorder wait time to receive one can be pretty extreme. That’s rarely a problem with ultralight hoodless sleeping bags because there’s less of a demand for them.

The chief disadvantage of a hoodless ultralight sleeping bag over a quilt is that it’s potentially heavier because you lie on a portion of the insulation and don’t get any benefit from it because it can’t trap hot air. I say potentially because some manufacturers make hoodless sleeping bags with very lightweight fabrics and high fill power down insulation that weigh in the same ballpark as a quilt. For example, my Feathered Friends Flicker 40 UL weighs 18.3 oz, while my Feather Friends Tanager 20 weighs in at 19 oz, which is quite comparable to similarly rated quilts.

If you’re in the process of switching from a mummy sleeping bag to a backpacking quilt or you’ve tried a quilt and decided it isn’t for you, I’d encourage you to give hoodless sleeping bags some consideration. They have a lot of advantages over quilts, with a minimal weight penalty, and they are vastly more comfortable than most mummy sleeping bags with hoods.

SectionHiker is reader-supported. We independently research, test, and rate the best products. We only make money if you purchase a product through our affiliate links. Help us continue to test and write unsponsored and independent gear reviews, beginner FAQs, and free hiking guides.
Previous Comparison of Five Ultralight Backpack Liners
Next Big Agnes Tiger Wall UL 2 Tent Review