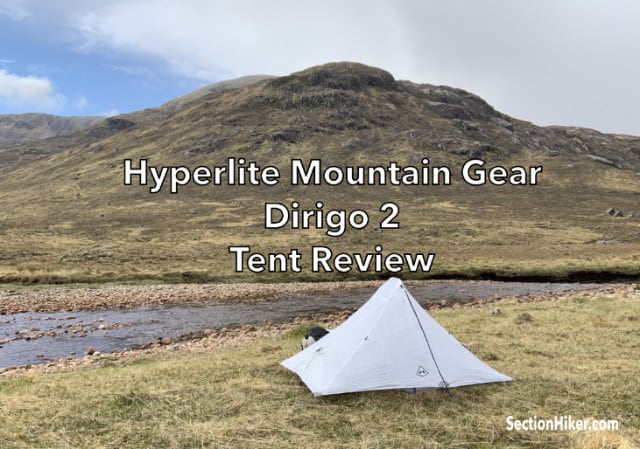 The Hyperlite Mountain Gear Dirigo 2 is a hybrid single-wall/double-wall 2 person tent made with several different grades of Dyneema Composite Fabrics (DCF) that are strategically placed at different points in the tent’s architecture to balance the competing needs of strength, weight, and ventilation. Weighing 28 oz, the Dirigo 2 has a wind-resistant pyramid shape with two doors, two vestibules, and requires two trekking poles to erect. While Hyperlite has been making modular pyramid and tarp shelters for many years, this is the company’s first all-inclusive, one-piece tent with a sewn-in floor. (See the Dyneema Composite Fabrics FAQ for more information about this remarkable material.)

Best Used as a Solo Tent

The Dirigo 2 is a Dyneema pyramid-style trekking pole tent that's cramped for use by two people and best used as a solo shelter. It is also prone to condensation buildup in non-arid environments and could benefit from more ventilation.

The Dirigo 2 is a two-person tent with a hybrid single wall / double wall design, with two side vestibules and two doors, and requires two trekking poles to set up. The sidewalls of the tent (behind the vestibules) are no-see-um mesh, with a D-shaped door on each side so occupants can have their own entrance. The vestibules are large enough that you can store a backpack in one and still get in and out of the tent, but they’re not really deep enough to cook under, even with a canister stove system. The vestibule doors do not reach all the way to the ground but have an air gap underneath to promote airflow through the tent to combat internal condensation. This is a common ventilation tactic in single wall tents but leads to a draftier tent in cooler weather.

The trekking poles holding up the tent are angled rather than vertical. They’re held in place at the handle end by a reinforced peak and at the tip by a grommet attached to the outside of the tent floor. The reinforced peaks are located at the ends of a short carbon fiber strut, which creates a short roof ridgeline rather than coming to a point like a true pyramid structure, in order to provide more interior room to sit up. This combination of structural elements creates a strong and quite rigid skeleton when the vestibules are zipped closed and pegged securely to the ground. The trekking pole architecture also lets you lower one pole and not the other if you can only pitch up on an uneven tent site or if you want to reduce the amount of airflow under the vestibule doors.

However, unzipping the vestibule doors and rolling back one half or the whole, weakens the structure considerably. This could easily be remedied by running guylines from the top of the roof peaks to the ground, so the Dirigo doors can be opened without reducing the strength of the tent. There are no tie-outs on the Dirigo’s peaks to run additional guylines, but this would be a useful and fairly easy mod to make with some minor sewing and seam sealer.

The Dirigo 2 is constructed with multiple grades of DCF including the use of waterproof breathable DCF-WB at the head and foot ends of the tent. The DCF-WB works wonderfully (I’m impressed), even when the remainder of the interior walls are drenched in condensation. However, the triangular patch of DCF-WB still results in condensation transfer to your footbox or head since it doesn’t span the width of the wall. Which begs the question: why use a small triangle of DCF-WB when you could make the lower half of the side wall with it, or even the entire wall and eliminate condensation altogether?

Internal condensation is a big issue with the Dirigo 2 when it’s used in a non-arid climate. While all single wall tents are prone to internal condensation, tent designers have come up with clever ways to combat it. One tried and true method is to sew an area of mesh between the floor and the tent wall, to facilitate airflow even when the vestibule doors are shut tight to block out rain or high wind. Another is to add peak vents in the ceiling of the tent to help vent the body heat and breath exhalations that exacerbate internal condensation. The Dirgo doesn’t have either. My solution is to carry a camp towel with me when I use the Dirigo 2, to sop up the internal condensation each morning.

While the Dirigo 2 is designed for use by one or two people, it’s far more comfortable as a spacious one person tent rather than a cramped two-person tent. The orientation of the doors, which are on opposite ends of their vestibules, assumes that your head will be positioned next to your partner’s feet and vice versa. Rainbow zippers would have been a better choice, so you have the option to orient your heads together.

The headroom inside the tent is good and there’s a mesh pocket that hangs below the ceiling strut which is super convenient for holding a phone or overhead lamp. There are also gear loops sewn into the seams which are convenient for hanging up glasses and other items so they’re not crushed underneath you.

The Dirigo 2 is only available in white-colored DCF. While it’s sufficiently opaque to provide a decent amount of internal privacy, the tent becomes insufferably hot if pitched in direct sunlight, even with the vestibules wide open. This is a common problem with many DCF shelters, including pyramid tarps.

The Dirigo 2 is easy to set up because it has a rectangular floor plan. You simply stake out the corners at 45-degree angles, insert your trekking pole handles into the reinforced peaks, stake out the vestibules, stake out the side panels, and tension the linelocs and guylines. You can even pitch it in the pouring rain and keep the inside dry. There’s also no need for a footprint since the bathtub floor is made with a tougher grade of waterproof DCF.

To pack it up, reverse the process, but fold the tent up rather than stuffing it in order to minimize its packed volume. At 9.5L in size, packed, the Dirigo 2 is a bulky tent to carry. While it comes with a DCF stuff sack, it can be a struggle to get it to fit into it in the morning. If you’re careful and do get it into its stuff sack, it will barely fit horizontally into a Hyperlite Mountain Gear 3400 Southwest Backpack. But more often than not, especially when the interior is soaked with internal condensation, I carry it in a stuff sack lashed to the top of my backpack. This makes it much easier to set up and dry off in the sun during rest stops and helps prevent moisture from compromising the dry gear inside my backpack.

There are relatively few one-person and two-person DCF tents available, and while tent weight and cost are important dimensions, it’s worth understanding what other variables are important to you before you make a purchase decision.

Here are some important dimensions that are worth considering when choosing between different tents and shelters. This might seem long a long set of variables, but they can help you avoid buying the wrong shelter, especially a shelter from a cottage manufacturer that you can’t return for a refund if it doesn’t meet your needs.

Footprint: How much space is required to set up the tent? For example, if you like to camp at unprepared (wild) test sites, it can be easier to find a level, dry, or open space for a one person tent instead of a two-person tent.

Draftiness: Some tents are draftier than others. For examples, shelters with a rain fly and vestibules that go all the way down to the ground tend to be warmer than those that don’t because they have less airflow. Tarp tents, where the fly and the floor are connected with mesh, tend to draftier than double wall tents.

Modularity: Do you want the ability to split apart your shelter into components and only use part of it in different weather or terrain? For example, buying a pyramid tarp and an inner nest, or a double wall tent, can be much more flexible than buying a single wall tent with a permanently sewn-in floor.

Interior Space: Do you want to be able to store your gear inside the tent with you? If so, you might be better off buying a two-person tent and using it by yourself. Do you need a tent that can fit two people, even though realistically you plan to mostly use it for one person?

Number of Doors: If you plan on using a two-person tent for two people, it is much more convenient to have one with two doors.

Ease of Entry: Tents that have wide side doors are usually easier to get in and out of than ones that have a narrow front door. In addition, wide vestibules with two independent doors (split in the middle), make it possible to use one half for gear storage and the other half for entry.

Hyperlite Mountain Gear has been selling modular pyramid and tarp-based shelters for many years, but the Dirigo 2 is their first self-contained tent. While the Dirigo 2 is a strong shelter, given its pyramid shape and DCF construction, and suitable for use in high wind, it is quite prone to internal condensation when used in non-arid environments. While all single wall shelters are susceptible to internal condensation (see also How to Prevent Tent Condensation), I’ve indicated a number of tweaks above that could be made to the Dirigo design to significantly reduce the issue and make it more optimal to use in a wider range of conditions. While the Dirigo is well made and bomber tough like Hyperlite’s other DCF backpacking gear, my advice would be to hold out until the Dirigo 2.0 version ships and the shelter is refined still further.

Disclosure: Hyperlite Mountain Gear provided the author with a tent for this review.

Editor's note: If you’re thinking about buying gear that we’ve reviewed or recommend on SectionHiker, you can help support us in the process. Just click on any of the seller links above, and if you make a purchase, we may (but not always) receive a small percentage of the transaction. The cost of the product is the same to you but this helps us continue to test and write unsponsored and independent gear reviews, beginner FAQs, and free hiking guides. Thanks and we appreciate your support!
Previous Cape Wrath Trail Trip Report, Southern Half, May 2019
Next Gear that Worked and Gear that Didn’t on the Cape Wrath Trail