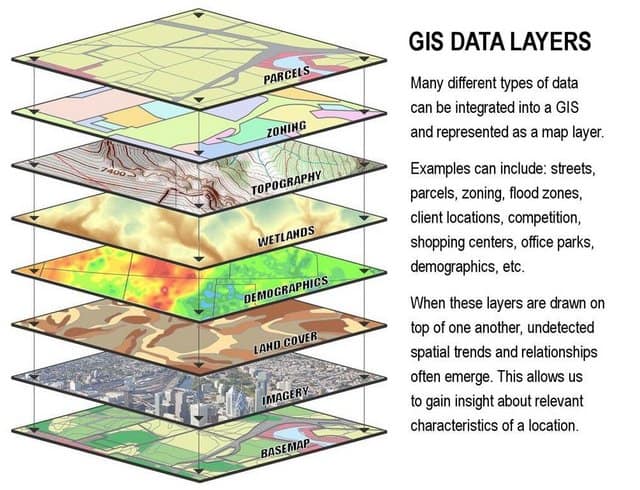 Most modern maps are generated from multiple map layers stored in Geographic Information Systems (GIS). Each map layer represents a different group of geo-referenced data points that are superimposed one on top of the another to create a composite map image. For example, Google maps using this technology to display businesses and public buildings on top of street maps. It’s also used widely in business applications to visualize relationships between different data layers and geographic areas.

Many modern phone-based backcountry navigation apps including Gaia GPS and Guthook’s Guides,  use map layers to display different views of the same geographic areas and hiking routes. Map layers are also used by Caltopo.com, a free and very powerful web-based mapping application that lets you incorporate your own data layers.

One of the most powerful features in Caltopo and other navigation apps is the ability to switch between multiple base maps of the same areas, including satellite imagery, so you can view and compare the same route using different types of background maps. For example, I can draw a hiking route to climb a mountain and then superimpose it on top of different backgrounds that emphasize different aspects of an area to help visualize what I’m likely to encounter on foot.

One of the thorniest issues with backcountry navigation today is knowing which digital base maps and data layers you can trust to be up to date and what you can’t. Digital map publishers and the apps that use digital maps don’t go out of their way to provide this information for you and the copyright notices published on digital maps or map layers rarely correspond to the dates in which the data was gathered. I’ll cover this topic more in another article.

Your best bet is to carry a topographic map created by a local map publisher or outdoor organization that has a vested interest in publishing reliable maps. Maps published by national publishers, like National Geographic, are often based on outdated data from last-generation USGS maps. It can also pay to carry or plan your trips with multiple paper maps as a way to check or augment the accuracy of digital sources.

Previous Foam Sleeping Pads vs Inflatable Pads on the Appalachian Trail
Next Does DEET Harm Outdoor Clothing and Gear?