I just got back from a 22 mile southbound section hike on the Long Trail that featured a climb over Camel’s Hump (4,083 ft), one of the top three highest peaks in Vermont. This hike was by far the hardest hike I’ve done on the Long Trail so far. The ascents were very difficult, steep and wet, and my average pace was just slightly more than one mile per hour.

I started this section at the Jonesville Post Office off Rt. 2 at the southern base of Mt Mansfield. From here, it was a 3.2 mile walk down Duxbury Road which runs parallel to the Winsooki River at an elevation of 326 ft, the lowest point of the Long Trail. From here, the ascent to Camels Hump requires a 3,700 foot climb over a distance of 6.3 miles.

Arguably, the southbound traverse of this section is slightly harder than hiking it northbound, but after my lightning and hail experience on Mt. Breadloaf a few weeks prior, I’ve become increasingly wary of hiking the high peaks in thunderstorms. Camel’s Hump is a bald summit (left peak in picture above), well above tree line, and I wanted to get up and over it before the inevitable daily rain storm.

The ascent from Duxbury Road gets steep immediately, but at least you’re still walking on dirt and mud where the footing is fairly good. This lasts up to the junction with Bamforth Ridge Shelter, at the base of Bamforth Ridge. From here to the summit, the trail is more of a rock scramble than a hike and I found myself using a lot of rock climbing moves to make headway. 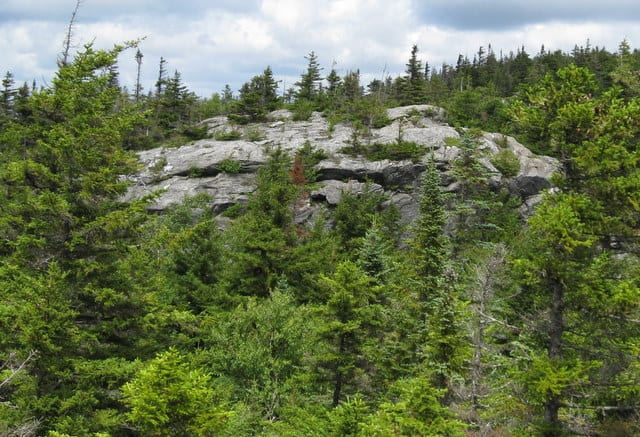 Bamforth Ridgeline has a sawtooth pattern with many precipitous ups and downs over rocky escarpments covered with scrub trees and alpine vegetation. However the rocks are still fairly dry making the hike challenging, not impossible. Still, I wouldn’t want to hike this ridge in the rain.

After the ridge, there is a steep one mile ascent to the summit of Camel’s Hump. On this stretch the rocks are extremely slick with water running over them, but I figured, I’d rather climb up here than down. I huffed and puffed my way up this part, and snapped a hiking pole, breaking a fall. It’s just as well I suppose, because I needed the extra hand to claw my way up the grade.

Although the weather was warm, the wind was really whipping on top of the summit, so I put on my rain shell to stay warm since I was soaking wet with sweat. There are a number of easier side trails up to the summit and I met a couple that took some photos of me at the top. 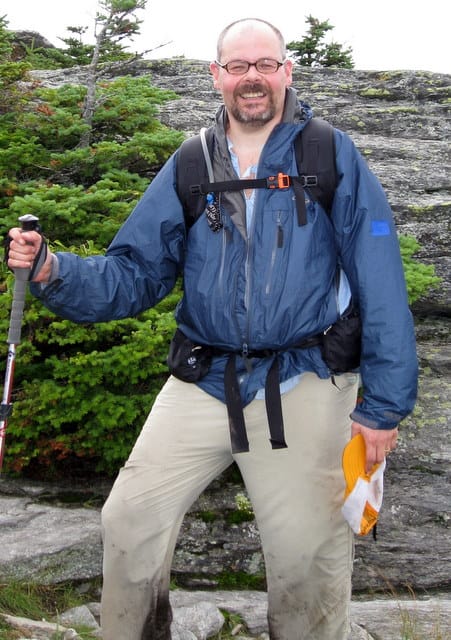 I was still concerned about the weather so I didn’t linger on Camel’s Hump and started my descent. From the summit, the trail drops steeply as it winds down to tree line and I found myself hugging the talus on the mountain’s edge to avoid falling down some big drops. Scary staff, but perfectly safe if it’s not raining and you keep your cool. 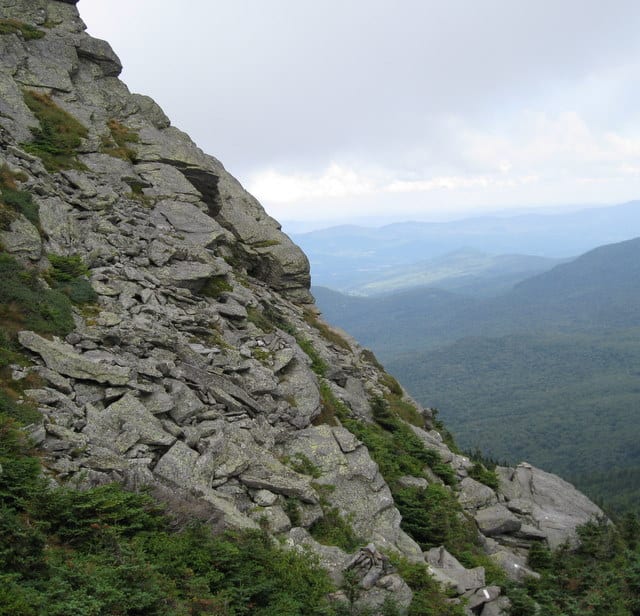 Eventually, I made it to tree line and started the 1,100 ft. decent to Wind Gap and Montclair Glen Shelter about 1.5 miles north: more steep, slick rock and chancy footing. 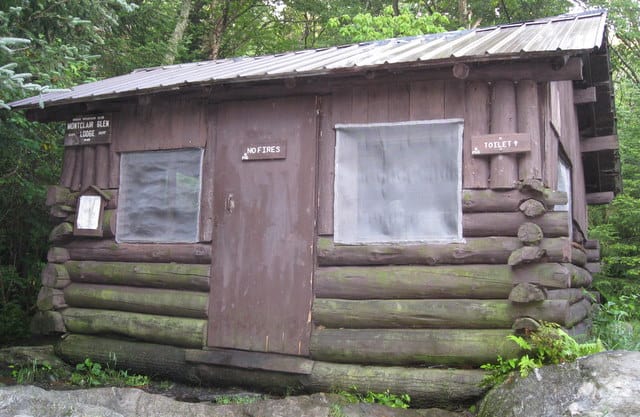 By the time I made it to Montclair at 5:45 pm, I was exhausted. I clumped into the shelter (with dry boots!) and had a big meal of Gouda cheese and bread to elevate my brain function before filtering water and setting out my gear for the night.

Montclair is a cozy cabin, obviously the worse for wear, that is scheduled to be rebuilt this month by the Green Mountain Club. It has a caretaker this summer named Geoff who maintains the composting privy, educates hikers, collects the $5 fee for staying the night. We chatted over breakfast the next morning as he read through the comments left by hikers in the shelter log. Someone had stolen his rain jacket, which he had left to dry in the shelter, and he was justifiably bummed out. I have an extra that I plan on sending to him if I can find a way to get him resupplied through the GMC. 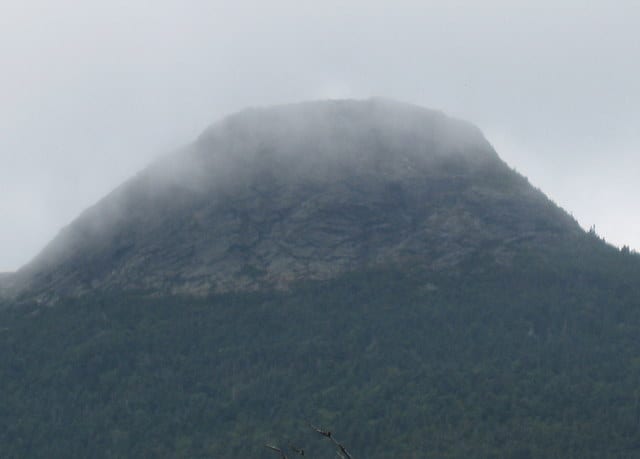 I broke camp by 7:15am the next morning and started climbing the one mile/1,000 ft. ascent to Mt. Ethan Allen (3,688 ft) which I summited after an hour. The sky was blue and I was encouraged by the fact that I might have good weather the rest of the day. There was a good view from the summit  back to Camel’s Hump (above) and of the mountains to the south (below) all the way to Appalachian Gap.

After summiting Ethan Allen, I started to meet groups of northbound hikers who had spent the night at Cowles Shelter, a lean-to about 5.4 miles south of Montclair Glen. They reported that it had rained heavily during the night and that the trail was very wet to the south. What an understatement!

I continued hiking south, summiting Mt. Ira Allen (3,506 ft) and Burnt Rock Mountain (3,168 ft) when it became clear the weather was changing for the worse again. The sky had become overcast and darker as I crossed the extended bare summit of Burnt Mountain before dipping again below tree line. I met another group of northbound hikers who planned on summiting Camel’s Hump that day: I hope they made it to a shelter before the thunderstorms hit at 5pm.

This group told me that the next 3 miles of trail were actually trail (as in dirt) instead of the rocky, wet scramble I’d been hiking since Bamforth Ridge. What they didn’t tell me was that the trail was submerged, quite literally. I’ve concluded that the best pair of shoes for hiking the Long Trail are wellingtons or fishing waders. I set off and made good headway despite the wet conditions to Birch Glen Shelter, about 2.5 miles from Appalachian Gap and my car. 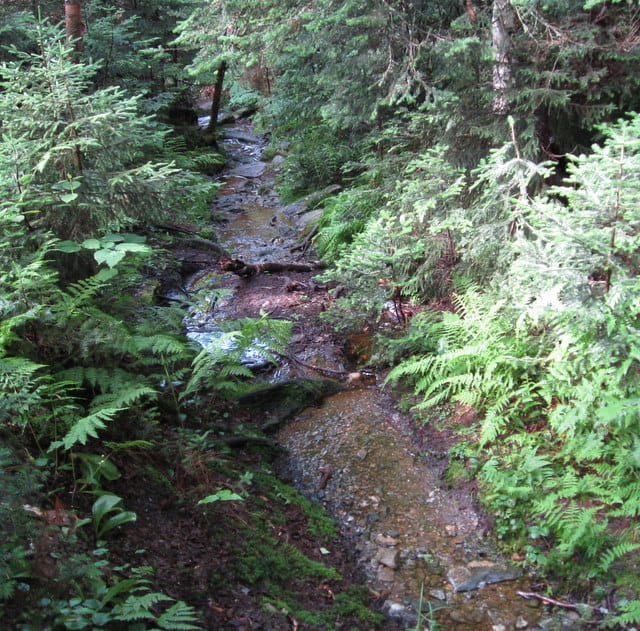 It rained along the way for about 30 minutes, but not enough to soak my pants so I only put on my rain jacket. However, it was clear that weather conditions were deteriorating and I could hear high altitude thunder booming away off to the north. I had a logan bar snack at Birch Glen and then decided to go for it and try to get over two more mountains, Molly Stark Mountain (2,967 ft) and Baby Stark Mountain (2,863 ft)  before the storm hit. This turned out to be a very near thing, as I made it to my car just a few minutes before the storm arrived.

The climbs over Molly Stark and Baby Stark were tough. The trail up to Molly Stark ascended 900 ft in 1.3 miles, but was far easier than the climb up Baby Stark, which was a near vertical climb up boulders, rock face and tree roots. I sighed a sense of relief when I got over these two summits and started the decent to Appalachian Gap which plummets about 500 ft. in 0.4 miles. By this point I was not phased by the slick rocks and moisture around me; I was singularly focused on a French roast and something very salty to eat in Moretown, below.

My intuitions and weather forecasting skills turned out to be spot on. Beginning at 6pm that evening there was heavy rain and lightning storms from Appalachian Gap to Johnston, about 50 miles to the north. I hit some of this weather on my drive home down to Boston and was forced to pull off the side of the road because it was raining so hard. I hope the northbound hikers I saw on my trip got through these storms ok, and I plan on adding an extra day to my next section hike, a 40 mile hike over Mt Mansfield (4,393 ft), and Spruce (3,330 ft), Madonna (3,668 ft) and Whiteface (3,714 ft) Mountains in case I need a little extra time to sit out inclement weather in a shelter.