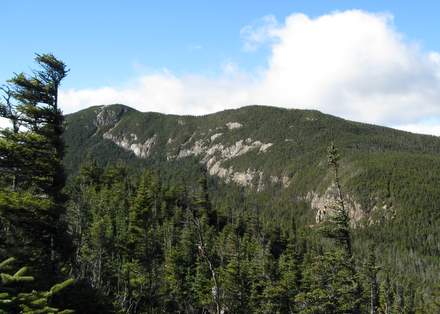 
On Sunday, I climbed another two 4,000 footers in the White Mountains, Mt Osceola (4,340 ft) and its neighbor East Osceola (4,156). These peaks are located in an area of the Whites that I haven't done much hiking in, east of the Sandwich Range Wilderness, and about 20 miles south of the Appalachian Trail.

The weather started a bit dicey, with low clouds and 40-50 mile an hour wind gusts, but turned gloriously sunny by 11:30am. There had been about 2 inches of rainfall on Saturday, so the trail had a lot of water on it, but there were no major stream crossings along my route and I made good time, hiking a total of 8.4 miles in 5.5 hours with a total elevation gain of 2,500 ft.

As usual, I left the house before dawn for the 2+ hour drive up to the Whites. The trail head for the Mt Osceola Trail and several other major summits in the area is off Tripoli Rd, which is closed in the winter. Tripoli starts shortly after you exist Interstate 93 and immediately immerses you in the backcountry. It was beautiful today: all the trees on it were a golden yellow and the camp sites on either side of it looked very inviting. I need to come back here. 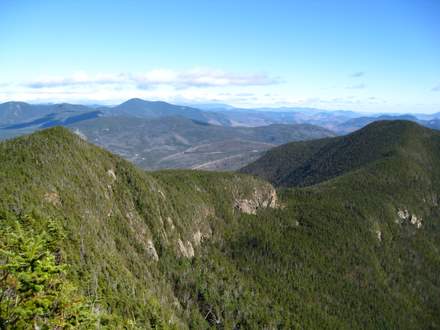 
The hike up Mt Oceaola was a bit challenging. I hadn't bothered to unpack my winter gear after summitting South Twin Mountain last weekend in the snow and ended up humping a 30 lb pack all day. I figure it's good training. Winter will be here in a few more weeks.

After reviewing the White Mountain Guide last night, I didn't expect the ascent of Mt Osceola to be that difficult. But the trail was very rocky and slabby, with large puddles and water pouring down it. I still made good time and hiked the 3.2 miles to the first summit in about 2 hours. Both peaks are known for their fine views, but the summit was in cloud when I reached the top, so I kept walking, hoping to catch a view on my return trip back from East Osceola.

From the summit of Mt Osceola, the trail descends steeply to a col before continuing up to the top of East Osceola. Before the col, you need to descend a 40-50 feet tall vertical cliff that drops down a chimney (see center, above). The chimney has great handholds and is not hard if you take your time and make very deliberate moves on the wet rock.

Once past the chimney and the col, I summitted East Osceola which is only 1 mile further north. At this stage, I started meeting peak baggers who were hiking in from the Greeley Ponds Trail to the north, which is an easier shorter hike. I took a short photo break at the summit and then retraced by steps back to the summit of Mt Oceola. 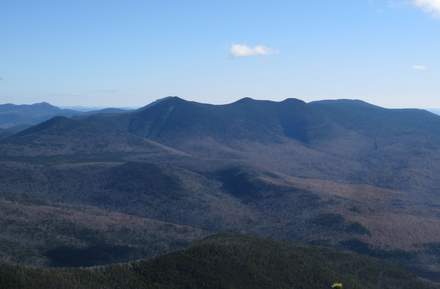 
By this time, the wind had blown the cloud cover off the summit and there were fine views to be had, including the Tripyramids above. I hunkered down behind a granite windbreak, had a snack, and explored the ledges. I was joined by JR, another hiker that I had met back at the trail head, who had bushwhacked up Osceola. He's been hiking the Whites for 25 years and has been all over. His hobby is collecting old guidebooks and maps and finding old trails through the region, bushwhacking in the backcountry to get to them. We had a very cordial chat and soaked up the sun's rays. I love those chance encounters with kindred spirits.

After a spell, we went our separate ways: JR disappeared into the trees and I climbed down the trail to my car, satisfied and content after a fine walk.

Previous Shelter Etiquette
Next Why I Hike