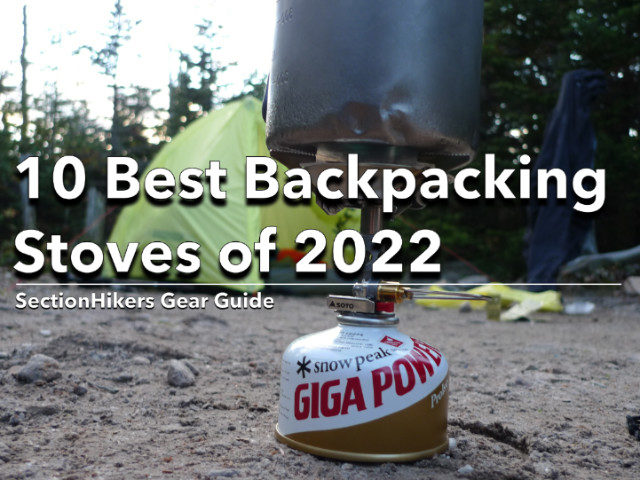 Note: When comparing the weights of these products, it’s important to differentiate stoves from stove systems. The latter often include integrated cook pots, windscreens, and stove stands, in addition to the stove burner unit. 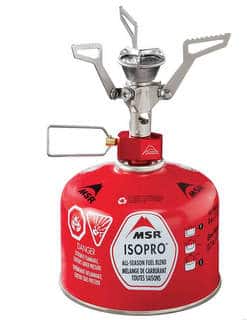 The MSR Pocket Rocket 2 is compatible with all screw-type isobutane canisters. Compact and lightweight, it weighs 2.6 ounces and includes a built-in pot stand that’s compatible with a wide range of pots. When not in use, the arms of the pot stand fold down and fit into a small protective plastic case. The adjustable flame control is easy to use while wearing gloves and provides fine-grained control from a rolling boil to a slow simmer. The nice thing about buying a standalone stove like the Pocket Rocket 2 is that you can use it with several different best-of-breed pots and pans, instead of being locked into a single all-in-one stove and pot combination. Read our review. 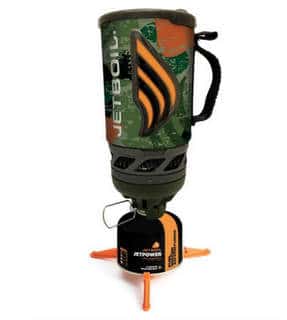 The 1L Jetboil Flash is a fully integrated personal cook system that includes a stove, insulated pot w/lid, stove stand, and a plastic measuring cup/bowl. It’s designed to do one thing incredibly well, which is to rapidly boil water for drinks and to rehydrate backpacking/camping meals. Weighing 13.1 ounces, the Flash can boil 1 liter of water in 4 minutes and 30 seconds  (although it can only boil a half liter at a time). A push-button ignition system eliminates the need to light the stove while a color change indicator on the outside of the pot insulation cover lets you know when your water is hot. When not in use, the stove, stand and a 100 g gas canister fit inside the cookpot, making it easy to pack. The 0.8L Jetboil Zip is very similar but more compact, while the 1.8L Jeboil Sumo is large enough for two people to use. 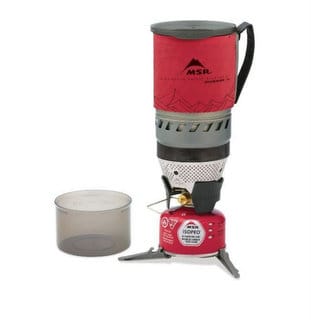 The MSR Windburner is another complete canister stove system that includes an insulated cook pot, stove, stabilizer, and plastic mug/bowl. The thing that sets it apart from the Jetboil Flash is its flame-less stove, wind resistance, and fuel efficiency. Called a radiant burner, it uses a completely enclosed heating element with an internal pressure regulator that makes the stove virtually impervious to outside conditions. Weighing 15.5 ounces, the Windburner can boil a liter of water in 4 minutes and 30 second minutes and is nearly twice as efficient as a Jetboil, so you get twice as many boils per gas canister. When it’s time to go, the Windburner stove system packs up into its cook pot, with space for a 110 g gas canister. Read our review.

The Trail Designs Caldera Cone is an ultralight, all-in-one alcohol stove system with a combination windscreen/pot stand that’s fitted to one of several dozen cook pots that you specify when you order a Cone. It uses the Trail Design’s Kojin stove which is designed to perform in the lower oxygen/higher heat environment found inside the Caldera cone systems. The Caldera Cone also includes an alcohol fuel bottle, measuring cup, and a plastic caddy to roll up and carry all of the Cone’s components when not in use. The Caldera Cone is considered the gold standard for ultralight backpacking when it comes to alcohol stove systems and only adds a few ounces to the weight of your cook pot and fuel. Read our Review 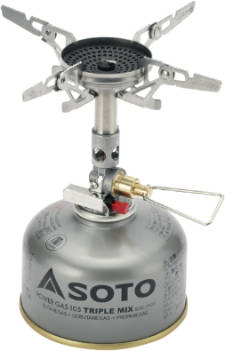 Soto is a well-respected stove company known for making finely engineered stoves. The Soto Windmaster is specially designed to provide superior wind performance with a recessed burner head that acts like a built-in windscreen. This also lets pots sit closer to the burner head, improving fuel efficiency. The Windmaster comes with a clip-on 4-arm clip-on pot support that can support larger cook pots.  Weighing 3.0 ounces, the Windmaster is a very powerful 11,000+ BTU stove, that can simmer or boil wicked fast. It’s also available with or without a piezo igniter, and very reasonably priced. Read our review. We’re also fans of the Soto Amicus Stove, which has an attached pot stand and is available with an integrated cookset. 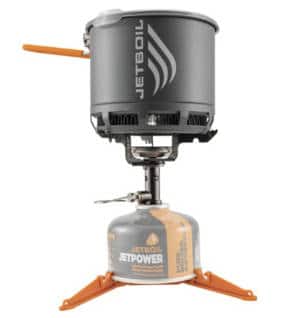 The Jetboil Stash is a 7.1 oz fully integrated personal cook system that includes a titanium stove, an anodized cook pot w/lid, and a stand. It’s much less powerful than the Jetboil Flash listed above but also much smaller, lighter weight, and packable which is the reason it’s such an attractive option. When not in use, the stove, stand, and a 100g oz gas canister fit inside the cookpot, making the Stash remarkably easy to pack. The Stash can boil a half-liter of water in 2 minutes 30 seconds and boil up to 12L on one small fuel canister.  Matches not included. :-) 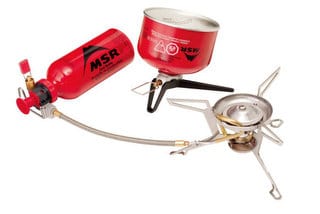 The MSR Whisperlite Universal burns a variety of fuels including white gas, kerosene, unleaded gasoline, and isobutane-propane canisters giving you lots of flexibility no matter where you find yourself. Just switch the fuel line and select one of 3 self-cleaning Shaker jets, depending on the fuel type required. When burning white gas, the Universal can boil a liter of water in 3 minutes 30 seconds while it takes 3 minutes 45 seconds with an isobutane canister. Simmering is possible with all fuel types as well as a roiling boil, while the remote burner makes it possible to use a windscreen, no matter what type of fuel is used.  In addition to the stove, the 13.7 oz Whisperlite Universal includes a fuel pump, windscreen, heat reflector, and small parts kit. 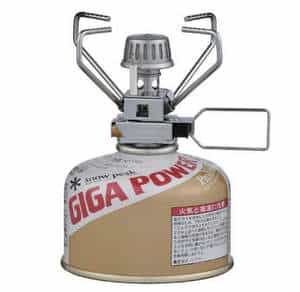 The Snow Peak GigaPower 2.0 is a standalone isobutane canister stove that can simmer or boil water. It has four pot supports that are compatible with a wide variety of cook pots, as well as a built-in piezo ignition system for matchless ignition. A solid and reliable performer, this 10,000 BTU stove weighs 3.2 ounces and takes an average of 4 minutes 45 seconds to boil a liter of water. While it comes with a protective plastic case, it can also be stored in a variety of cookpots with a gas canister. An add-on windscreen is also available to boost its impressive fuel efficiency.

The Zelph Fancee Feest Stove and an aluminum alcohol burner with a built-in stainless steel pot support that positions your cookpot at the proper height above your stove for an optimal burn. Weighing 0.8 oz, the Fancee Feest comes with fiberglass wicking that pulls the fuel upwards for a complete burn of fuel. The boil time for 2 cups of water is about 8 minutes depending on water and air temperature. This stove works best with squat pots rather than tall skinny ones and requires a windscreen. It should also be used on a flat surface to avoid being tipped over, something that can be an issue with many simple alcohol stoves like it. Zelph makes a number of other great alcohol stoves as well. 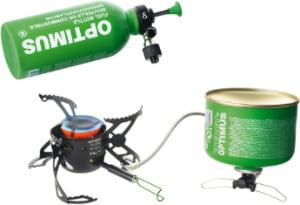 The Optimus Polaris Optifuel Stove is a multi-fuel stove that can burn canister fuel, white gas, kerosene, diesel, or jet fuel making it ideal for international travel. The stove can also operate with isobutane canisters in the upright position as a gas (3 season) or upside down (4 season mode) using a liquid feed for cold weather operation. Remote positioning of a canister fuel source lets you use the stove with a windscreen for maximum efficiency, while the integrated pot and stove stand enables use with larger pots for snowmelting or group cooking. The stove includes a liquid fuel bottle. Large 1 liter liquid fuel bottles are also available.

How to Select a Backpacking Stove

When choosing a backpacking stove it’s best to consider:

There are five main types of backpacking stoves:

White gas stoves burn a refined form of unleaded gas. They’re good for group cooking and winter cooking because they generate a large amount of heat.  They can be bulky, however, which is why most solo hikers don’t use them. Canister stoves are best used for individual use or couples. Some can simmer, but most are specialized for boiling water. Alcohol stoves are very simple and preferred by thru-hikers and ultralight backpackers, in part because it is so easy to resupply denatured alcohol on a long distance hike (sold in supermarkets, drug stores, and hardware stores.) Wood stoves can be convenient if natural fuel is easily available, but fire bans in dry states often prohibit their use. Solid fuel stoves burn prepackaged fuel cubes and are also very lightweight, but the fuel can be hard to resupply on a long trip.

A stove system includes everything you need to boil water or cook food including a stove, a cookpot, windscreen, and a stove stand, making it a very convenient and economical way to acquire the stove components you need for backpacking or camping. While group stove systems are available, most of them are designed for single users and solo backpacking. Most stove systems are based around canister stoves and are quite windproof, which increases their fuel efficiency. They are limited in their capabilities, however, and more geared toward boiling water quickly, rather than simmering meals.

Winter stoves are designed to burn fuel at lower temperatures, usually in a liquid form. White gas stoves can burn down to external temperatures of 40 below zero, Fahrenheit, while canister stoves that can burn a liquid feed (called inverted canister stoves) can burn down to about 10 degrees, Fahrenheit. Winter stoves are designed to melt snow to create drinking water and usually lack the ability to simmer meals since they’re glorified flame throwers.

Stove power is measured in BTUs. The higher the number of BTUs, the more heat the stove will put out and the faster it will boil water.

Many canister stoves are available with integrated sparking units called piezo igniters, so you don’t need to carry matches or a lighter to ignite your stove. While they are incredibly convenient, they have a tendency to wear out if you use your stove frequently. They are usually replaceable, but many people buy stoves without this feature to save money if they plan on using their stove heavily.

Check Out All of SectionHiker's Gear Guides!

Disclosure: The author has received sample products mentioned in this article over the span of many years from MSR, Soto, and Trail Designs. The rest he’s purchased with his own funds.