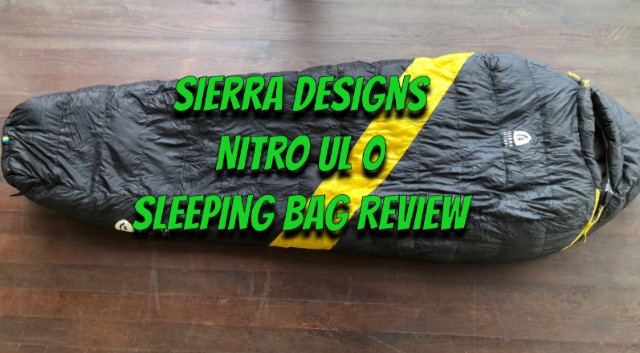 The Sierra Designs Nitro UL 0 is a lightweight winter sleeping bag that strikes an excellent balance between cold weather features and gear weight. Weighing just 2 lbs 8 oz, the Nitro UL 0 is insulated with 800 fill power DriDown. It also has a draft collar, which is arguably one of the most important features of a cold-weather sleeping bag,  a half-zipper to save weight, and a foot vent, which helps extend the bag’s range for use in warmer weather. But while the bag itself is nicely designed and performs well, Sierra Designs has priced it lower than most comparable bags. If you’re looking for a good value on a cold-weather sleeping bag, the Nitro UL 0 should be on your shortlist, with several caveats that I discuss in detail below.

Specs at a Glance:

A zero-degree mummy-style sleeping bag can be a comfortable option if you’re a cold sleeper or like to backpack and camp early in cooler weather. While quilts are increasingly popular for warm weather use, mummy bags are far less drafty and warmer when the mercury drops below 20 degrees. They also provide a warm enclosure where you can store water, filters, and footwear overnight to prevent them from freezing. This is harder to do with an ultralight quilt, which is usually sized narrow and short to save weight.

When choosing a cold-weather sleeping bag, it’s important to get one that’s big enough that you can fit in it with some of your gear, so it doesn’t freeze at night, including the perspiration in your boots. Some people get a longer bag than needed, so they can store gear by their feet. Sleeping in temperatures below freezing definitely changes your behavior and requires a slightly different skillset and gear list than regular three-season camping or backpacking in warmer weather.

The Sierra Designs Nitro UL 0 is a cold-weather bag that has many of the extra features you find on bags designed for sub-freezing temperatures, including a:

Let’s take a closer look at each of these.

The Nitro UL 0 has a draft collar that drapes over your chest and seals the warm air in the lower part of the bag so it isn’t forced out the top when you move around inside (sometimes called the “bellows effect”). The draft collar is just an insulated tube of down, but it’s an essential element of a sleeping bag designed for cold weather. However, the draft tube in the Nitro is quite simple and drapes passively over your upper chest, unlike higher-end bags, including the NEMO Sonic 0, where you can adjust its fit for a tighter seal.

A draft tube functions similarly, but covers the side zipper to prevent cold air from leaking past it. The draft tube is positioned adjacent to the zipper in the bag’s interior and drops over it when the zipper is closed, so your legs will feel the insulated tube, instead of a cold and drafty zipper.

Sierra Designs also added a stiff border along the zipper to prevent any zipper snags with the bag’s liner fabric and it works very well. Snags are more common in cold weather bags because they have loftier baffles that can snag in a zipper’s teeth. It’s important to prevent them because you can easily rip the liner fabric and experience significant insulation loss unless you can patch the hole quickly.

The foot vent helps compensate for the lack of a full-length zipper because you can stick out your feet if you’re too warm. The foot vent is a slotted opening (with overlapping fabric) in the bottom of the bag and seals closed if you lie with your lower legs over it. While the foot vent does break the bag’s thermal envelope, in reality, you’ll be sleeping on an insulated pad, which will negate any serious heat loss as long as your legs and the bag are positioned on the pad.

The Sierra Designs Nitro UL 0 is insulated with 800 fill power DriDown. This is a chemically treated down that’s water-resistant and will dry faster than untreated down if it gets wet. Fill power is a way of grading the insulating quality of goose and duck down. For example, 800 fill power down is very insulating and for its weight and considered premium quality, while 650 fill power down is heavier for the same level of heat retention. See the Low Down on Goose Down for a more detailed explanation of down fill powers.

However, the fill power of the down in a sleeping bag is more important than whether it’s been treated with a water-resistant coating or not, because the fill power is one of the main factors that determine the weight of a sleeping bag. The higher the fill power, the lighter weight of the bag. These “waterproof”  coatings are a nice-to-have, but in reality, most people can prevent down from becoming compromised by moisture. Net-net. 800 fill power down is a good thing, regardless of whether it’s water-resistant or not.

The Nitro UL 0 has a 0 degree temperature rating that’s printed on the exterior of the bag and it’s important to understand what the ratings mean:

The comfort rating indicates the lowest temperate where a woman (or cold sleeper) using the Nitro UL 0 will be comfortable, while the lower limit indicates the lowest temperature that a man (or warm sleeper) can remain comfortable. Women need about 10 degrees more warmth than men because they have lower body mass. Based on these numbers, the men’s Nitro UL 0 is equivalent to a 15 degree bag for a female and a 2 degree bag for a man. If that sounds surprising, it’s because men’s bags tend to be longer and higher volume than women’s bags, and therefore harder for small women to heat up.

For these ratings to hold true, the man or woman needs to be wearing long underwear and socks, they need to sleep on an insulated sleeping pad, and not be exposed to wind. These are conditions stipulated by the outdoor industry sleeping bag temperature rating standard, and if you don’t adhere to them, you’ll sleep colder and less comfortably than the Nitro’s UL 0’s EN temperature ratings.

But there’s another fly in the ointment. EN temperature ratings are less reliable for cold weather sleeping bags that have ratings less than 10 degrees Fahrenheit. That doesn’t mean that the Nitro’s temperature rating is necessarily wrong: it means that there will probably be a higher degree of interpersonal variability in the perceived warmth of a Nitro 0.  See Winter Sleeping Bag Temperature Ratings: Words of Warning for more information on this topic. If you want more assurance that you’ll be warm in 0 degree temperatures, get a bag rated for -10 degrees.

They discovered this in a recent spec audit they performed in-house (there have been internal personnel changes) and have since sent the women’s Nitro 0 UL out to have its temperature ratings independently tested. If I were you, I’d wait for those new women’s bag ratings to be published before buying the women’s Nitro UL 0. The women’s version of this bag has a different length and volume than the men’s Nitro 0 UL, so the ratings may change. It’s possible that it will remain true to its 0 degree product name, but why risk it?

All of the 0 degree sleeping bags listed below have draft collars. As you see below, the Nitro UL is very competitively positioned in terms of weight and priced significantly less than most other zero degree down sleeping bags. While the fill power and the weight of the down fill in a bag is highly correlated with its perceived warmth, other design factors can also effect its temperature rating. You’d have to spend a lot more money to buy a 0 degree bag that has more down fill or down with a higher fill power than the Nitro UL 0.

The Sierra Designs Nitro UL 0 is a well-appointed down sleeping bag for cold weather use that’s very competitively priced and a real bargain compared to other similarly outfitted winter sleeping bags. It’s also extremely lightweight, which increases its utility for backpacking, particularly in early spring or late autumn, when you need more insulation to sleep comfortably at night. While the design of any cold weather sleeping bag requires compromises between many competing cost factors, Sierra Designs has done an admirable job of providing consumers with a well-featured cold weather bag at a very affordable price.

While there’s nothing “wrong” with the Nitro UL 0, especially if gear weight is your primary concern, I’d recommend taking a careful look at its shoulder, hips, and foot box specs and comparing them to other bags on the list above for the bag length you’re considering. I like having more room in a cold-weather bag to store gear like a water bottle and boots, so they don’t freeze overnight. I also hang out in my bag and listen to audio books or read in winter during the long 12 hour nights.

I realize that comfort is hard to assess without trying each bag in person to see if your extra gear and stuffed animal will fit inside, but it’s important to understand that cold weather sleeping bag requirements are somewhat different from three season ones. If you can’t try out a bag in a brick-and-mortar store, buy them online and return them if they don’t meet your needs. There’s no upside in being miserable during a long and cold winter night. This is a significant enough expenditure, for a bag you’ll keep for at least 10 years, that you want to get it right.

If you’re a woman, see my comments above about the women’s Nitro UL 0’s temperature ratings. I’ll update this post when Sierra Designs gets their test results back and updates their women’s Nitro UL 0 specs (if necessary).

Disclosure: Sierra Designs provided the author with a sleeping bag for this review.

SectionHiker is reader-supported. We independently research, test, and rate the best products. We only make money if you purchase a product through our affiliate links. Help us continue to test and write unsponsored and independent gear reviews, beginner FAQs, and free hiking guides.
Previous Paria Outdoors Zion 2 Tent Review
Next How Breathable are Waterproof/Breathable Winter Hiking Boots?