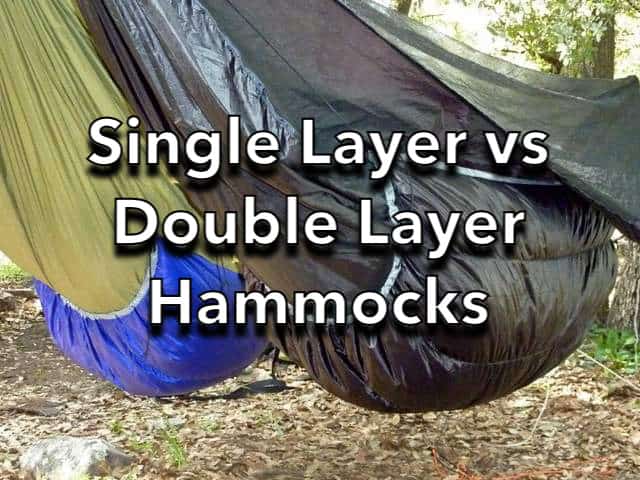 Many backpacking-style hammocks come in double-layer or single-layer models. How do you decide which hammock to get and what are the consequences of choosing one type over the other?

A double layer hammock is so-called because the part you lie on has two layers of fabric. The two layers form a pocket that can be used to hold a foam or an inflatable sleeping pad. The pocket helps hold the insulation in place and gets it out of the living compartment where it can be clumsy to deal with. The second layer of fabric also makes the hammock stronger, so it can hold a heavier person than a single layer hammock.

A chief benefit of using a double layer hammock is that you can use inexpensive insulation like closed-cell foam or inflatable sleeping pads with it. Chances are you already own some of these, like a Therm-a-Rest Z-lite pad, a blue foam pad, or an inflatable sleep pad. As it gets colder, you can layer several of these pads in the hammock’s pad pocket for more insulation or use a pad/underquilt combination.

In a single layer hammock, there’s only one layer of fabric underneath you. While this makes the hammock lighter weight, it also means that there isn’t a separate pocket to hold additional sleep insulation. While you can try to lie on top of a pad in a single layer hammock, most people find it very frustrating to position properly (since you’re lying on the pad you’re trying to reposition.) The pad may move around and has to be realigned every time you get up at night to pee.

Most single layer hammock users use an underquilt instead, which hangs underneath your hammock to trap your body heat and keep you warm at night. But underquilts are a lot more expensive to use as hammock insulation than foam or insulated pads. You may also want to buy several underquilt that are rated for different temperatures ranges (for example: 0-20 degrees and 40-70 degrees.)

Most of the hammock underquilts available today are made by small manufacturers including Hammock Gear, UGQ, or Enlightened Equipment. Mass-market manufacturers such as ENO, Kammok, and others have also started selling underquilts, but prices remain relatively high.

While underquilts are very comfortable once you dial in your hammock suspension system and they’re highly compressible for packing in a backpack, buying a single layer hammock can be a much more expensive proposition than buying a double layer hammock and using less expensive bottom insulation with it.

How to Choose Between Them: Advice

Philip Werner has hiked and backpacked over 8500 miles in the United States and the UK and written over 2500 articles as the founder of SectionHiker.com, noted for its backpacking gear reviews and hiking FAQs. A devotee of New Hampshire and Maine hiking and backpacking, Philip is the author of Backpacking the White Mountain 4000 Footers, a free online guidebook of the best backpacking trips in the White Mountains in New Hampshire and Maine. He lives in New Hampshire. Click here to subscribe to the SectionHiker newsletter.
Previous MSR Thru-Link Inline Water Filter Review
Next How to Speed Up Esbit Cube Cooking