Sleeping Pad R-Values and Temperature Ratings: How They Correspond 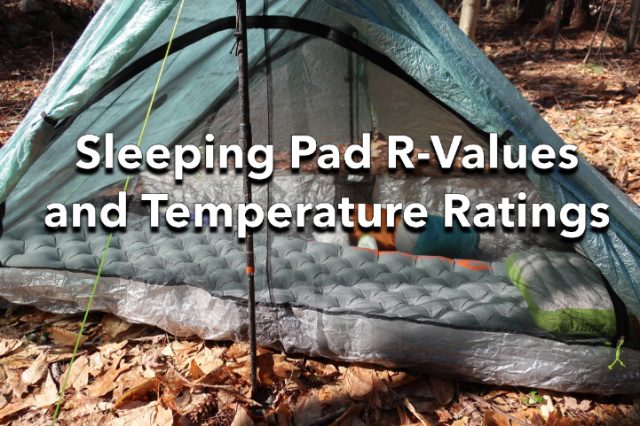 Backpacking and camping sleeping pads are rated using R-values which measure their ability to keep you warm when you lie down on the cold ground. The higher the R-value, the greater the insulating power. It’s much more technical than that, but that’s the gist of it.

But people really struggle with the concept of an R-value and its implications when it comes to backpacking and camping gear selection. What they want to know is a pad’s temperature rating, like the way that sleeping bags are rated. What is the coldest temperature I can still use this sleeping pad and remain comfortable? That’s the real question they want to be answered.

Here’s a table that shows how R-values correspond to Temperature Ratings. These are air temperatures, which people have easy access too from weather reports and historical temperature data published by companies like the Weather Underground that you can look up easily.

It’s important to qualify the R-values in the table above. They are based on the R-value standard called ASTM F3340-18 which was spearheaded by REI, Exped, Thermarest, Sea-to-Summit, NEMO, Big Agnes, and Klymit that specifies a common R-value test methodology. It was necessary to define so that the R-values published by different companies can be used as a common method of comparison by consumers. Before that standard was formalized, every company had a different way of computing R-values, making comparisons impossible. You also had no real way of knowing if the pads had ever been tested, if the published R-values were estimated, or just made up.

Unfortunately, many companies still publish sleeping pad R-values that aren’t measured using the ASTM F3340-18 R-value standard. Who are they? They include most of the offshore, fly-by-night brands listed on Amazon.com, Walmart, and Aliexpress like Sleepingo, Powerlix, Gear Doctors, ZOOBELIEVES, and others, as well as more established lower-cost brands like Paria Outdoor Products and Featherstone Outdoor Products. That doesn’t necessarily mean you’ll freeze to death if you use a pad rated with a non-standard R-value, but it makes them difficult to compare with pads from other manufacturers since they don’t use a common testing methodology.

If you do decide to buy a lower-cost pad from one of these manufacturers, I’d stick to ones intended for warm weather camping above 50 degrees F. Look at their online product reviews and if other customers endorse them in comparable conditions, they’re probably a reasonably safe purchase. For colder temperatures, especially those below freezing, I’d recommend getting a pad whose R-value has been rated using the ASTM F3340-18 R-value standard so you know exactly what you’re getting.

SectionHiker is reader-supported. We independently research, test, and rate the best products. We only make money if you purchase a product through our affiliate links. Help us continue to test and write unsponsored and independent gear reviews, beginner FAQs, and free hiking guides.
Previous Backpacking a Jumping Brook Loop
Next Zpacks Vertice Rain Jacket Review