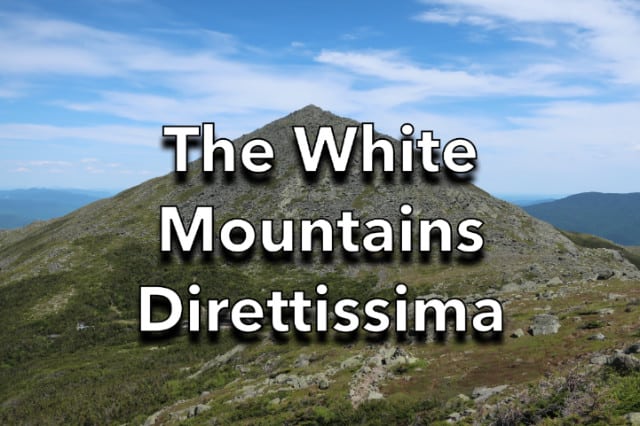 The White Mountain National Forest, known as “The Whites” has its share of difficult hiking lists and challenging hikes. The White Mountain 4000 footer list with its 48 peaks, is the list that most aspiring New England hikers cut their teeth on before branching out to work on the Terrifying 25 or the 52 With a View. For those seeking a more extreme challenge, there’s The Presidential Traverse, The Pemigewasset (Pemi) Loop, and The Grid, which requires hiking all 48 of the White Mountain 4000 footers in each month of the year.

The History of the Direttissima

The first White Mountains Direttissima was completed in 1970 by Henry Folsom over the 46 White Mountain 4000 Footers (there were two fewer peaks on the list then) where he climbed all of the peaks and walked the distances between them but drove home each night to sleep in his own bed (Henry T. Folsom, The Four Thousand Footers, “Direttissima”, Appalachia, 38:#4, p.65, 1971.)

Fast forward to 2007, when Mats Roing finished the next documented White Mountain Direttissima over the course of 10 days and 14 hours. Mats carried all of his own food for the duration of the hike and camped out each night, except the last, which he spent at a B&B to get out of torrential rain. You can read a short description of Mat’s route on Views from the Top or as an edited chapter in Peak Experiences: Danger, Death and Daring in the Mountains of the Northeast.

There’s no governing organization overseeing the White Mountains Direttissima or granting certificates of completion and there are few rules. There’s no set route and you can climb all 48 of the White Mountain 4000 footers in any order or direction that you choose.

The only hard and fast rules are that you walk, run, and/or ski the route end-to-end and start at a trailhead and finish at one, which are the accepted norms for peakbagging endeavors.

There are many challenges to hiking a White Mountain Direttissima apart from blisters and the physical fatigue of climbing 75,000 feet elevation. Chief amongst these is the weather, which can be downright life-threatening above treeline, with high winds, thunderstorms and lightning, and cold temperatures year-round.

Winter snow covers the higher elevation peaks from November until well into May with horrendous insect pressure (bug season) in June. July is the month with the most thunderstorms and August is often unbearably hot. The best time to hike a Diresttissima is during September and the first half of October when nighttime temperatures are cooler and insects are the least active.

The White Mountains trail system is lightly blazed and it pays to be familiar with the trails in advance so you know which ones are the easiest to climb or should be avoided at night.  The trails are also rough, rocky, full of tree roots, and quite steep.

Since 2007, a dozen or more hikers have completed the White Mountains Direttissima, and it’s attracted its fair share of people wanting to set supported and unsupported FKTs (Fastest Known Times). The times for these records range from just under four days to eleven days. Perhaps the most ambitious of these was a self-supported, self-powered Winter Direttissima completed by husband and wife, Rich Gambale and Arlette Laan, in 29 days. One has to be impressed by Rich and Arlette’s perseverance in this undertaking since winter in the White Mountains is quite harsh and unforgiving.

While Direttissima FKTs are impressive to read about there’s no reason you can’t hike the White Mountain Direttissima at a more casual pace or incrementally as a section hike, like Henry Folsom did originally in 1970, resuming each section where you left off previously.

Breaking a Direttissima into smaller chunks, or sections would make the endeavor a lot more accessible to a larger group of participants. You could day hike or backpack sections as long as they add up to an end-to-end Direttissima. The level of effort required would probably be comparable to section hiking the New Hampshire Appalachian Trail with a few side-trips thrown in to get the outlying summits.

Section hiking a Direttissima is definitely something to consider if you’re looking for a challenge but you can’t take the time to do it all at once.