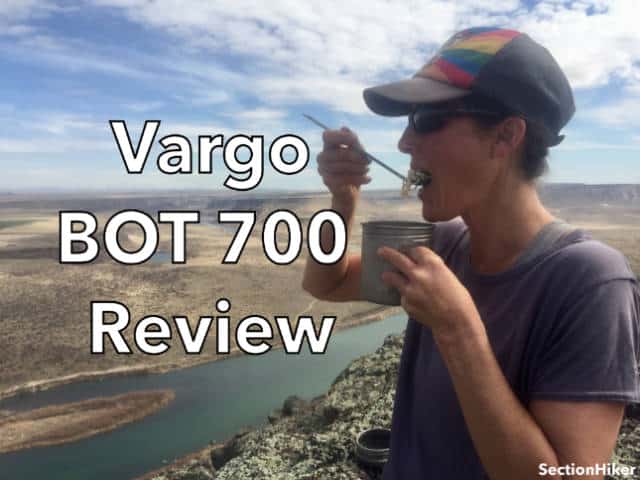 The Vargo BOT 700 is a lightweight, wide-mouth titanium bottle that can be used for cooking or cold-soaking meals on backpacking and camping trips. The BOT 700 lets me cook some of my meals and cold soak others, without the need to carry a separate cook system or plastic cold-soaking vessel, which is a win for me in terms of simplicity and packability.

Cold Soaker and Cook Pot in One

The Vargo BOT 700 is a lightweight, wide-mouth titanium bottle that can be used for cooking or cold-soaking meals on backpacking and camping trips.

The Vargo BOT as a Cookpot

At only 4.4 ounces, the Vargo Bot 700 is one of the lighter cookpots on the market. I also like how compact it is: the sealable lid fits securely on the pot which makes it easy to stow in your backpack.

Before the BOT, I’ve used a Snow Peak Trek 900 Cookset when I thru-hiked the Appalachian Trail in 2016, and on subsequent trips after. It’s done me good, but I can’t stand how the lid doesn’t fit securely on the pot when storing, and how it never seems sturdy as a lid while cooking. I didn’t mind the weight of 6.2 ounces, especially since it was the 900 ml model, but I’ve realized I don’t need that much volume when backpacking. The BOT 700 works better for me in this regard.

Is the Vargo BOT Really Leak and Spill-Proof?

The short answer is yes. But the sound of screwing and unscrewing the lid is a bit like nails-on-a-chalkboard and it can be a little hard to thread properly.  I got used to both and it didn’t bug me that much, because I liked how snugly it fit when done.

My first trial with the BOT was to test it with cold-soaking noodles while I hiked. I plopped my noodles in the pot, added water, screwed on the lid, and then did a vigorous shake-shake dance as if it were a maraca in my hand. No leaking.

Next, I stowed it on its side in the mesh front pocket of my backpack and hiked forty minutes; I deliberately didn’t place it upright because I wanted to test the leak-factor. When I checked, no leaking had occurred in my bag. The noodles were ‘cooked’ in the same fashion as if I were using my trusty Talenti jar, so all was good in my world.

One thing to mention is the BOT isn’t new on the market; it’s been around a few years, yet Vargo revised it to the version that exists now. Supposedly older models did not have gaskets and leaking did occur. I mention this because if you read other reviews on the BOT 700, make sure they are recent ones that cover the newer model.

Hydrate Your Food While You Hike

‘Hydrate While You Hike’ is the catch-phrase Vargo uses with the BOT. If you use the BOT to pre-soak your food as before you cook it on your stove, you can effectively decrease your fuel usage and meal waiting times. And if you’re a cold-soaker, you can skip the cooking part completely and just rehydrate your meals as you walk. There may be occasions you want to cook and other times you don’t (like me), so the BOT gives you the potential to do either.

Cooking with the Vargo BOT 700

There are a few things worth commenting on when it comes to cooking with the BOT.

The lid must be unscrewed while cooking to prevent an explosion – super important! The BOT also has foldaway handles which is a nice feature, but they can get hot when cooking. Make sure they are open rather than pressed against the pot while cooking, making the pot easier to remove from your stove.

The Advantage of Pre-Soaking

If you opt to pre-soak your food before cooking to minimize fuel use, your food simply won’t need as long on the stove. When I tried this, I found I didn’t need to get the water as hot. Titanium has a reputation of being prone to burning food, yet this is avoidable. The key is to run the stove at a lower level and stir often. You can also cook food to partially and seal so it can ‘cook’ more without burning fuel.

While it’s a no-no to seal the lid while cooking, you can flip the lip upside down to use as a pot top. Rest assured that the O-ring is temperature resistant, so you won’t have plastic running into your food.

The lid is also deep enough to be used for cooking as a little skillet, for drinking or making a side dish. Sometimes I prefer to mix peanut butter powder with water on the side of my pot to make a paste I dip my noodles into rather than just toss it in the cauldron. The BOT lid works great for this.

The Vargo BOT 700 is expensive at $99.95 but fairly unique in its function. Consider though that it’s more lightweight, which is often something you pay for. You also pay for durability: when talking to a long-term user of the BOT, he claimed it’s been way more durable than any other pot he’s had, without experiencing dents or breaking in some way.

Another consideration in weighing the cost is that you eliminate bulk if you want to cold-soak and use a stove, by being able to ditch your plastic cold-soak container. I will say that if you want to be in the cold-soak club only without ever cooking, it’s way more cost-effective to use a plastic container like one by Talenti or a peanut butter jar. The major advantage to the BOT 700 is that you can cook, cold-soak or pre-soak to then cook which reduces fuel consumption.

The Vargo BOT 700 fulfills the need for cooking versatility as a cold-soaker and a stove user. If you want flexibility in your cook options while backpacking, you won’t be disappointed with the BOT. However, if cost is an issue or you are a cold-soaker for life, it may not be the best choice for you.

You may also wish to check out the Vargo Bottle Pot (1L) and Vargo BOT HD (1L) for more alternatives on your backpacking adventures.

Disclosure: The author received a sample BOT for this review.

Heather Daya Rideout has been a life-long outdoorswoman. Her pursuits and passion for hiking and camping have taken her around the world for many long-distance trips; such as backpacking in Nepal, India, South America, Morocco, Europe, and North America. Heather has hiked the Appalachian Trail, the Pacific Crest Trail, and a route of 1,500 miles combining several Camino routes through Spain and Portugal. On any given day she would rather be outdoors than anything else and her lifestyle is a direct reflection of that deep love affair with nature. Heather currently lives in Idaho and she’s having a wondrous time experiencing the beauty it offers. You can read some of her other writing at Contently.com.
Previous Durston Gear Kakwa 40 Backpack Review
Next La Sportiva Bushido II Trail Runner Review