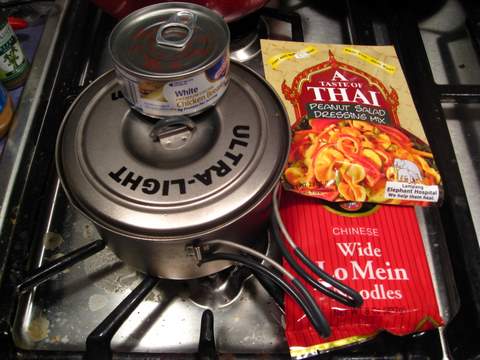 I tried out a new winter backpacking dinner recipe last night in the Section Hiker test kitchen that combines canned chicken breast, Chinese Lo Mein noodles (wheat), and a very spicy Thai peanut sauce. I even used my normal winter backpacking pot and insulated mug to make sure that I could make it on a hike using my winter cooking gear. Well not exactly: I didn't use my white gas stove last night. My dinner came out tasting pretty good and I think this one is a keeper.

This kind of meal falls into the category of one-pot meals, called Glop, that are recommended for winter backpacking. Glop meals need to be fast and easy to cook, since you'll be cooking them outside in freezing cold winter conditions. Chances are also good that you'll be using a high BTU liquid fuel stove that sounds like a jet engine and is good for boiling water and melting snow, but not much else.

Consequently, Glop meals tend to include a starch that's easy to quickly rehydrate, a boldly flavored sauce, and possibly some extra protein or fat thrown in for good measure.

In my experimental meal, I made the sauce first by boiling a cup of water and then mixing it and the peanut sauce in my insulated mug. I opened a can of chicken breast and added it to the sauce, setting it aside to thicken. Next, I boiled a half liter of water (1/6 of the 3 quarts that the Lo Mein package recommended), broke my noodles in half, and dropped them in the boiling water for 5 minutes. When they were done, I drained a little extra water out of my pot, and then mixed the sauce with the chicken, and the noodles together. The result was quite tasty and surprisingly good. It even got accolades from my wife. 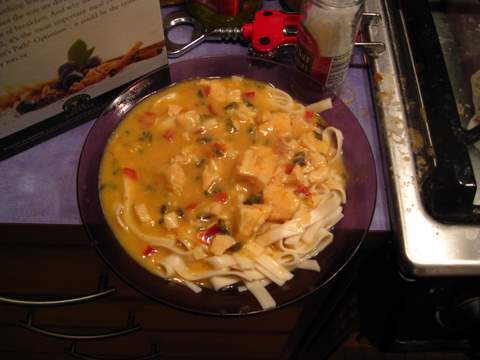 There is one small change that I will probably make to this meal the next time I make it. The sauce needs a little more body, so I'll probably add some freeze-dried vegetables to it in addition to the chicken. Freeze-dried foods rehydrate much faster than dehydrated foods and are preferred for winter cooking, where the speed in which you can make a meal is important.

Do you have any favorite Glop recipes of your own?

Previous AT Section Hike: Guilder Pond to Sheffield
Next Lakes of the Clouds Hut, Mt Washington