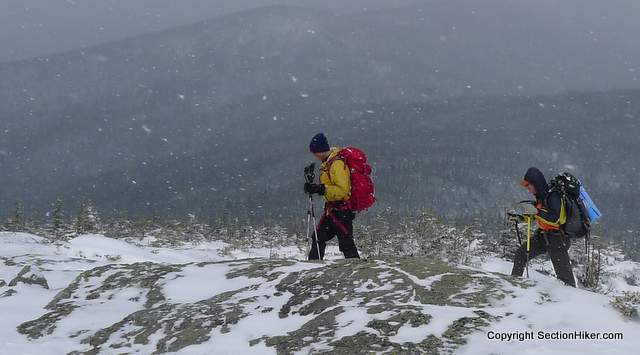 For winter hiking in the White Mountains, you’ll want need to learn about the weather patterns in the region and what forecasting tools are available for planning hikes. While many of these same techniques are useful for planning three-season hikes in the area, winter conditions in the New Hampshire backcountry are so extreme that you can’t simply plan a hike months or weeks in advance and expect the weather to cooperate. I have canceled many hikes due to sketchy weather conditions and would advocate you take a similarly conservative approach. The mountains will be there another day.

The main weather-related hazards in the White Mountains are the wind, cold temperatures, and snow conditions.

The wind in the White Mountains mainly blows from the west. If the wind is blowing from the south or east, it means that moist air is blowing in from the ocean which can result in rain or snow. If the wind is blowing in from the north or northeast, it is a strong indication of bad weather and heavy snow in the form of a Nor’Easter. Nor’Easters are low-pressure storms centered off the coast and the Gulf of Maine that dump large quantities of rain or snow on the White Mountains and throughout New England.

Mountains Create Their Own Weather

When the wind hits the mountains, it speeds up as it flows over mountain tops. This creates numerous microclimates in the White Mountains, depending on the geography of the terrain, which can have very different weather conditions despite being relatively close together. For example, Tuckerman Ravine often experiences much heavier snowfall than the rest of the White Mountains because it is the lee of Mt Washington, the highest mountain in the region. When the wind hits Mt Washington and its subsidiary ridges, its speed increases, the air cools and drops large amounts of snow into the Tuckerman Ravine Bowl.

For every thousand feet of elevation you climb, the temperature drops 3 to 5 degrees. Called the atmospheric lapse effect, this not only has temperature consequences but can also explain why the weather on top of mountains differs from valleys and lower elevations. It also explains why the risk of frostbite and exposure increases at higher elevations when coupled with increasing wind speeds.

Fronts – both cold fronts and warm fronts – define the dividing line between two air masses, one of which pushes the other out so its way. When fronts collide there is a change in the weather pattern, usually with bad weather, high winds, and a change in weather direction. Here’s what the interaction between these two types of fronts looks like on the ground.

Warm fronts, associated with areas of high pressure, affect local conditions gradually and often provide observable clues, such as wispy clouds, 24 hours before their arrival. Cold fronts associated with areas of low pressure move in much more rapidly, as fast as 35 mph, and cause rapid dramatic storms, followed by cooler and clearer weather. Knowing which is headed your way and when they will arrive can help you decide where you want to be when they make their influence on the weather felt.

Winter Weather in the Whites

So how bad is winter weather in the White Mountains? Here are a few local weather facts to put things in perspective: