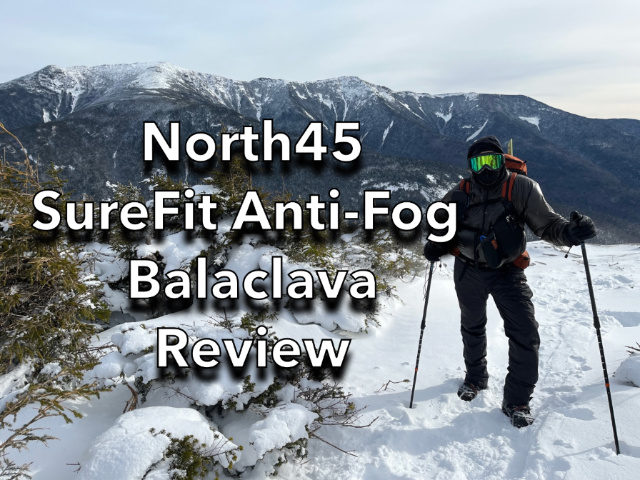 The North45 SureFit Anti-Fog (Non-Magnetic) Balaclava prevents lens fogging when used with a ski mask or glasses. The balaclava is made with merino wool and is available in multiple sizes. It consists of two attached pieces, a regular balaclava that covers your forehead and chin or mouth and a second ring of wool with a nose wire, like a surgical mask.  It really does work well but has some limitations that I discuss below. North45 also makes models with magnets that seamlessly attach to a ski mask, but as a winter hiker, I don’t wear a ski mask all the time and avoid putting on one until absolutely necessary. I’m also wary of magnets because they have the potential to interfere with a magnetic compass, which I’ve relied on more than once to hike out of a whiteout.

The North45 SureFit Anti-Fog (Non-Magnetic) Balaclava has two components: a traditional balaclava and a ring of fabric that loops around the front and had a bendable wire sewn into it like an N95 mask. The balaclava covers your head, ears, neck, and can be pulled up to cover your mouth if desired. The extra ring of fabric is attached to the balaclava behind the neck but can pull up to cover your mouth and nose. Otherwise, it just hangs below your chin and provides extra neck insulation.

This design works very well to prevent moist air from fogging up a ski mask or glasses because the nose wire forms a good seal with your face and moist air from your mouth is absorbed by the overhanding ring of fabric, the bottom of the inner balaclava layer, or simply vented below your chin.

The system does have some limitations in very cold weather (0 degrees), near the bottom of its operating range of -4 degrees Fahrenheit and colder.

That said, the North45 SureFit Anti-Fog Balaclava works better than any of the other balaclava systems I’ve used to keep my glasses or ski mask from fogging above treeline when I feel face protection is required. It’s really kind of miraculous. There’s no fogging of my prescription glasses even when I’m huffing and puffing and climbing to a mountain summit in 0-degree weather and high winds.  If this is something you struggle with I recommend you get one and try it for yourself.

There are a few ways that the balaclava system could be improved to make it easier for hikers to use.

North45 makes two other anti-fog balaclava products designed specifically for skiers that attach to facemasks with magnets. I haven’t reviewed those here. I’ve reviewed the model that is designed for non-skiers or people who want an anti-fog balaclava that does not require magnets. I suspect that the magnet suspension system and the fact that downhill skiers wear helmets mitigate some of the suggested improvements I make above.

In any case, if you’ve struggled with having your ski mask or glasses fog when using a balaclava, I suggest giving one of North45’s Anti-Fog Balaclavas a try. They really are the best anti-fogging balaclava solution I’ve found to date and I’ve tried many. If you can work around the limitations I describe above, you’ll be a much happier hiker when winter face protection is required.

Disclosure: The author purchased this product at the suggestion of a reader.

Previous Hiking Liberty and Flume in February
Next Should You Waterproof Gore-Tex Boots?

REI.COM: Holiday Sale! Up to 50% off. Save on prAna, REI Co-op brand, Salomon & more. Coop Members get free shipping. No minimum.