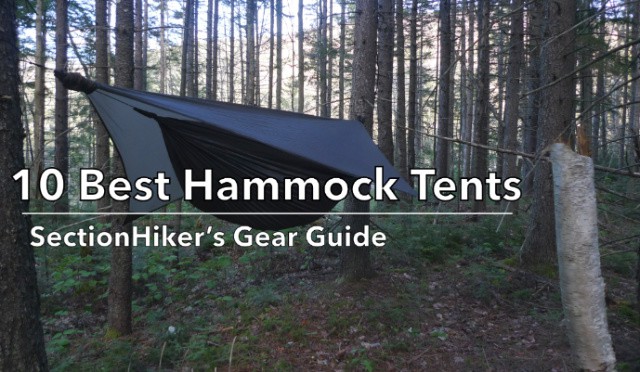 All-in-One Hammocks Tent Systems, also known as camping hammocks, backpacking hammocks, and hammock shelter systems are complete shelters that include a hammock, mosquito netting, a tarp for rain protection, and a suspension system to hang it all between two trees. The biggest advantage of buying an all-in-one hammock tent is that all the components fit together and you can take them out on the trail having confidence that they will work together as intended. That’s particularly useful if this is your first hammock setup, so you can learn the ropes. You can also purchase each component separately from a wide range of manufacturers, both large and small, but that can be an expensive trial and error process. I know this first-hand. 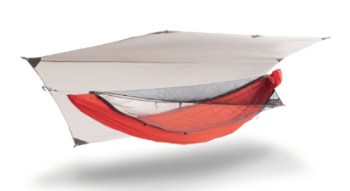 The Kammok Mantis UL is a complete hammock shelter system including a hammock with detachable mosquito netting, a tarp, and easy-to-use daisy chain style suspension system. While it by far the lightest weight hammock shelter system listed here, Kammok hasn’t cut any corners when it comes to the features, strength, and waterproofness of the materials it is made with. The Mantis is a single-layer hammock so it can be used with a sleeping pad or underquilt for back insulation. Check out our reviews of the Kammok Pongo Pad and the Kammok Firebelly Quilt to see how they integrate with the Mantis UL Hammock. Read our Kammock Mantis UL Hammock Tent Review.

Check for the latest price at:
Kammok | REI 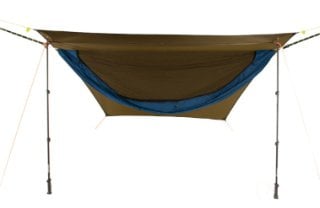 The Hammock Gear Wanderlust Hammock Kit includes an 11′ long zippered hammock with mosquito netting, an 11′ hex-shaped waterproof tarp, and a daisy-chain style suspension system. The long length of the Wanderlust hammock results in a flatter “lay” at night so you feel like you’re sleeping in a bed instead of a banana peel, while the knotless tarp keeps you dry and gives you more room to move around outside the hammock, for cooking. A mesh snakeskin for carrying your tarp and stakes are also included. Read the SectionHiker Wanderlust review.

Check for the latest price at:
Hammock Gear

The ENO SubLink Hammock Shelter bundles together the lightest weight hammock components in the ENO hammock product line including a gathered-end hammock, a separate mosquito net, rainfly, and whoopie style (knotless) suspension system. The hammock is a single layer, netless hammock, just under 9′ in length, making it more suitable for people under 6′ in height. If you need to use the optional bug net, it includes a ridgeline to keep it off your face. The SubLink includes the Helios Suspension System which is a great knotless whoopie-style hammock suspension that’s compatible with any hammock, while the included rainfly is a catenary cut tarp to reduce weight and improve wind performance. Read our ENO SubLink Hammock Shelter Review.

Check for the latest price at:
REI | Amazon

The Hennessy Hammocks Explorer Deluxe Asym Zip is a single-layer hammock and one of their lightest and most popular adult models. It has a patented asymmetric hammock bed and rainfly that reduces weight while improving comfort. The Explorer has a side zipper that makes it easy to get in and out of as well as fully integrated mosquito netting to keep bugs at bay. The suspension system combines webbing straps and lightweight Spectra cord for maximum strength. Hennessy is one of the most established hammock manufacturers catering to the backpacking and camping market. They singlehandedly invented the integrated hammock tent “system” and their products are a testament to that legacy.

Check for the latest price at:
REI 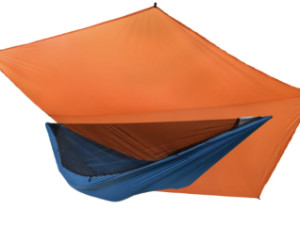 The Dutchware Wide Netted Hammock Package includes all of the components needed for hammock camping. Available in a wide range of custom colors, this wide hammock is perfect for taller individuals or those who want a flat sleeping experience. The complete package includes an 11 ft hammock with a structural ridgeline, an 11-foot tarp w/ guylines, and a lightweight polyester suspension system. It has a maximum weight limit of 350 lbs.

Check for the latest price at:
Dutchware 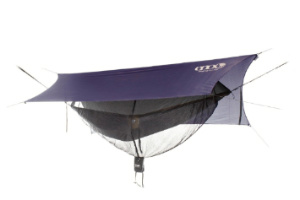 The ENO OneLink Hammock Shelter is a more luxurious and spacious hammock shelter system than the SubLink listed above, although it’s considerably heavier. It’s built around the ENO Doublenest Hammock which is sized for taller individuals or people who want more room with a separate optional insect net that is easier to get in and out of. The hammock suspension system is daisy chain based which is robust and easy to use, while the included rainfly can be set up without having to know about knots. Reflective guylines and tarp stakes help complete this shelter system.

Check for the latest price at:
REI | Amazon 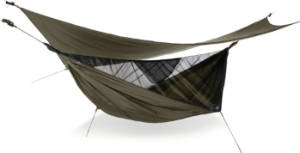 The Hennessy Hammock Ultralite Backpacker Asym Zip Hammock is a complete hammock shelter including a single layer hammock with integrated mosquito netting, internal gear storage pockets, a side zipper for access, a tarp, and a complete suspension system. Its integral ridgeline design holds a comfortable shape each time the hammock is set up, keeping your back straight and level when resting diagonally. The No-see-um mesh canopy keeps the bugs away while allowing air circulation while a gear pocket suspended from ridgeline holds small personal items. In addition, a waterproof, asymmetric silynylon ripstop rainfly adjusts to any angle for weather protection, can be rolled up or completely removed for other use. The total setup time is usually under 2 minutes with a little practice.

Check for the latest price at:
REI | Hennessy Hammock 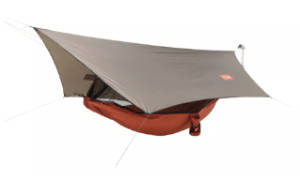 The Grand Trunk Air Bivy bundles together Grand Trunk’s Skeeter Beeter XT Hammock and HexFly Tarp. The Skeeter Beeter XT is a spacious 10′ 6″ long single-layer hammock with integrated mosquito netting that is held off your face with aluminum spreader bars. It even has a gear loft for extra storage, while the suspension system is knotless for ease of use. The HexFly is a huge 11′ 7″ rain fly, giving you plenty of coverage when you’re in your hammock or cooking and lounging outside.

Check for the latest price at:
Amazon 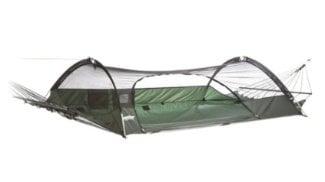 The Lawson Blue Ridge Hammock includes a waterproof cover, webbing-style suspension, and hammock w/ integrated mosquito netting that is held up over your body by two lightweight curved poles. The hammock is designed to give you a flat surface for sleeping and works well with a regular foam sleeping pad. A waterproof cover is included and drapes over the hammock without requiring a separate suspension. The Blue Ridge can also be set up on the ground if you don’t have two good trees to hang it from, increasing its flexibility.

Check for the latest price at:
Lawson Hammock | Campmor 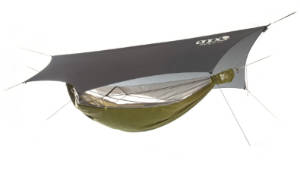 The ENO JungleLink Hammock System is a complete hammock shelter system that includes the JungleNest hammock with an integrated ridgeline, the ENO Helios suspension system (whoopie-style), an ENO DryFly rain tarp, and a storage bag. The 10′ JungleLink is ENO’s longest and most spacious hammock providing extra room to spread out and lie flat diagonally. It has an integrated bug net and spreader bar that boost interior volume by creating a tentlike canopy above the hammock body. The included large tarp has a knotless setup, waterproof seams, and eight guyout points.

Check for the latest price at:
Backcountry | Amazon

Buying a complete hammock shelter system is a quick way to try hammock camping and backpacking to see if it’s right for you. The nice thing about all of the kits listed here is that they include everything you need to sleep in a hammock, soup to nuts, without having to acquire additional components. That can be a tricky process when you’re new to hammocking and you can end up buying some incompatible gear.

Most people need insulation under their backs when sleeping in a hammock if its; less than 70 degrees outside. If you have a single-layer hammock you can sleep on top of a foam pad or suspend an underquilt underneath the hammock body. Inflatable pads don’t work that well because they’re hard to hold in place underneath you when you’re hanging in the air. Double layer hammocks have an internal sleeve under the sleeping surface, so you can tuck a sleeping pad into it to keep it out of the living space. The sleeve can also hold a foam or an inflatable sleeping pad. But the extra fabric layer on double layer hammocks does add to their weight.

There are three common types of suspension systems for hanging a hammock. Some shelters come with polyester webbing straps that you wrap around a tree and then hook your hammock too directly with a carabiner or a metal hook. Some add daisy chains to the webbing that you can clip your hammock to, and some use a knotless tensioning system called a Whoopie sling (which works like a Chinese finger trap) to attach a hammock to the webbing straps. All three work fine and the only real difference between them is usually gear weight, with the Whoopie sling being the lightest weight system.

Most tarps require a suspension system that is separate from the one that suspends the hammock between two trees. Most of the hammock tarps listed above have a knotless setup, with cord tensioners at the ends of the ridgeline and on the side guy lines for setup. This really expedites set-up times.

Hammocks that have bunched ends and a banana shape are called gathered-end hammocks and are commonly used on hammocks intended for backpacking. Long (length) gathered-end hammocks are better than shorter ones if you prefer sleeping flat, as you would on a bed, rather than with a back curved like a banana.  An 11′ foot long hammock is considered long, while a 9′ hammock would be considered moderately short.

Many hammocks have sewn-in mosquito netting, while it is zippered in, or even removable on others.  If you get a hammock without mosquito netting, you can get a standalone net that slides on over one end of the hammock that you pull over the head end or one that zippers closed on top. They’re all just as effective and what you get is usually a matter of personal choice and how much insect protection you need.

It’s really nice to have a pocket or two for internal gear storage in a hammock, even if it’s just for your keys and a smartphone. Most of your gear will have to be stored outside the hammock, usually on the ground, unless you get a gear sling to suspend it underneath your hammock.

Distance between Tarp/Rain Cover and the Hammock

If you plan to use one of the above hammock tent systems in hot or humid weather, consider getting one with an adjustable air gap between the tarp/rain cover and the hammock. Good airflow is necessary to combat the transfer of condensation from your tarp into the hammock and onto your sleeping insulation.

Check Out All of SectionHiker's Gear Guides!