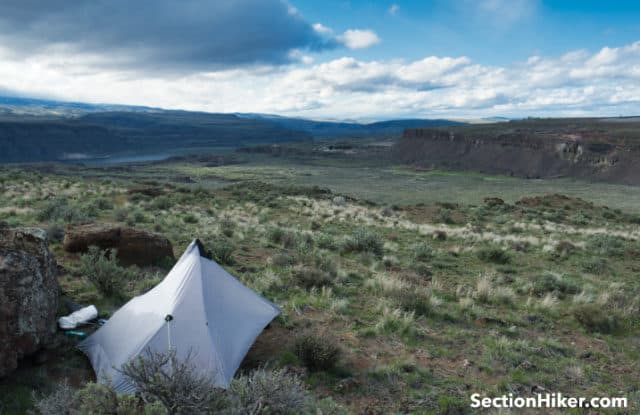 Ancient Lakes is a popular east-side backpacking destination in Washington State, especially early in the season when the Cascades and Olympics are snowed under. The area consists of two 1.5-mile-long coulees (box canyons formed by eroding basalt) separated by a 300-foot-tall “rib” or wall. The western ends of the coulees open to the Columbia River Gorge and the eastern ends are filled with lakes, specifically Ancient Lake and friends to the north and Dusty Lake (with its signature white bathtub ring) to the south.

I typically access the area from the west via the overnight parking lot at the end of Ancient Lake Road, which features a single portable toilet.

One of my favorite things about this area is the stark contrast to typical Pacific Northwest hiking. Often you find yourself confined to a view-less trail as it meanders through the woods. Here you’re free to wander wherever you like (although there are plenty of trails to follow) and the views stretch on for miles in every direction. The scenery looks like something straight out of a wild west movie, and the fact that the area is also quite popular with equestrians only adds to the feeling.

The northern coulee is the most popular by far, the rolling green hills near the lakes are frequently dotted with tents. The waterfall tucked into the northeast corner of Ancient Lake is of particular interest. The base of the falls is accessed by crossing the scree on the north side of the lake, and a steep footpath to the left of the falls allows you to reach the top as well.

Although it may not look like it from a distance, the peninsula on the north side of Dusty Lake can be reached from the eastern shore by following a footpath across the scree. A handful of established campsites are located near the tip of the peninsula. I suppose you could also cross the scree between the western shore and the peninsula although I haven’t tried this myself.

For this particular trip, I wanted to try something a bit different: I wanted to camp on top of the wall itself. I had explored the top of the wall on a previous trip but hadn’t tried pitching a tent so I wasn’t sure what to expect – it is, after all, a few hundred feet of solid basalt. However, it turned out that in many places the ground was covered in a very soft reddish-brown soil which was perfect for staking into.

At 2:45 AM I awoke to the yips and howls of the coyotes who inhabit the area as they ran up and down the length of the northern coulee for the next 10-15 minutes. The last time my wife and I were here we camped on the Dusty Lake peninsula and the coyotes were up around 5:30 AM so there was enough light to be able to watch them run along the scree slopes at the base of the wall.

The top of the wall is accessible from the northern coulee by taking a trail that begins at the base of the wall somewhat southwest of the lakes and ends in a gap overlooking Dusty Lake. From this gap head west along a faint trail to continue your ascent until you reach a very short but steep gully which you can then scramble up to reach the top.

From the southern coulee, the access is easier: about a third of the way along the wall from the tip is a wide “gap” or lower section in the top of the wall with a bowl-shaped depression at the west end – a faint trail follows the western edge of the scree here into the bowl. From the northwestern corner of the lower section, you can follow a trail up to the westernmost part of the wall where the prominent summit block resides.

A word of warning: the area surrounding the lakes is farmland which means the water in the lakes is tainted by pesticides from farm runoff. Normal methods of water treatment are ineffective at removing pesticides which for most folks means you’ll need to carry in all of your water. However, the Sawyer Select S1 water filter removes both chemicals and pesticides so when I saw it was half-off at REI I snagged one to test out on this trip. On that note, let’s get to the good stuff:

And that’s it, really. I’m pretty happy with everything in my gear list so my list of complaints seems to shrink after every trip.

Here’s a map of the route. This is a georeferenced PDF created using Caltopo. You can navigate with it using an app like Avenza (directions here) or just print it out. Ancient Lake Area (Map)

As I was gazing south across the southern coulee I noticed that the area on the plateau south of it looked pretty interesting but also pretty inaccessible, except for a scree slope where the power lines ascended the cliff at the southwest corner of the canyon. Checking maps online when I got home, I found out that not only is it also part of the Quincy Lakes Wildlife Area (the proper name for the managed land containing Ancient Lakes) but the area stretches another 2.5 miles south along the gorge all the way down to the Gorge Amphitheater. I think I’ll be heading that way next time I visit.

Finally, looking west at the rolling hills on the far side of the Columbia River Gorge got me wondering if you could go backpacking over there as well. Turns out that you can: it’s the 90,000 acre Colockum Wildlife Area which is run by the state’s Department of Fish and Wildlife (the same folks who manage Ancient Lakes). Another location to add to my list.

Michael Montgomery is a Washington State native who has been exploring the wilds of the Pacific Northwest for almost 20 years. He’s a backpacking mentor and trip leader for the Mountaineers who also dabbles in photography, scrambling, kayaking, and caving. His noteworthy international trips include the Salkantay Trek to Machu Picchu as well as the last third of the Camino de Santiago (because there’s only so much vacation time to go around). He enjoys helping new folks get the most out of their outdoor experiences.

Disclosure: The author owns all of the products mentioned above.