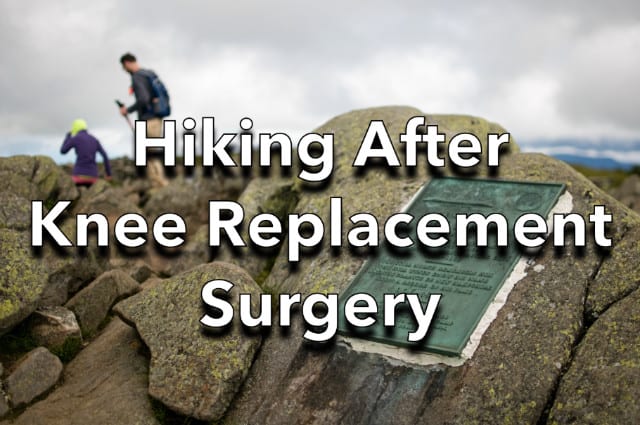 How does knee replacement surgery affect your ability to hike? How painful is the recovery? When can you resume hiking after surgery? What advice would you give to hikers with arthritis of the knee? As a frequent hiker, I’ll share my first-hand experience with you.

When to Seek Medical Advice

I can still remember a hike up Mt Moosilauke in June 2017, when I felt like I’d injured my knee. I haven’t always had the greatest knees for hiking, but this felt really off. I’d done a long loop over the mountain, coupled with a few bushwhacks. Initially, I just brushed it off as overuse, and things gradually improved but never returned to where they had been before that hike. That hike had somehow suddenly broken me.

The hikes continued because it’s what I do, but I quickly found that I couldn’t do what I did before. Mileage and difficulty were all lowered. Instead of climbing 4,000 footers in the White Mountains, I was leaning more on the 52 With A View, lower peaks in New Hampshire’s Lakes Region, and walks on Concord, New Hampshire’s local trail system.

I eventually sought out an orthopedic doctor and to make a long story short, was diagnosed with osteoarthritis in both knees, with the right one being more advanced. Those initial x-rays were eye-opening: I didn’t have much cartilage left.

Obviously, osteoarthritis doesn’t just appear out of nowhere. The progression was largely unknown to me until it finally roared up and got my attention on that Moosilauke hike.

Initial treatment included anti-inflammatories and bracing the bad knee. However, these efforts didn’t provide much relief due to the bones clanking together in there. With much consideration and thorough discussion with my ortho doc, the decision was made to go ahead with a unicompartmental (partial) knee replacement at the age of 51, which is a young age for this type of procedure.

So here I was, a person who’s never had surgery for anything about to have one of the most complex joints in the body broken apart and repaired. Would this work? Would it get me back to “normal”?

Fortunately, I live in the modern era where this surgery is fairly commonplace, although less common than a full replacement I would later learn, performed by skilled surgeons. No stick to bite on or whiskey to swig in this scenario.

As far as surgeries go, I didn’t feel a thing! I recall being quite anxious beforehand, but that’s what the anesthesia is for. I remember being wheeled into the OR, seeing the familiar face of my Physician’s Assistant, then going to sleep. The next thing I knew someone was waking me up but things were fuzzy after that.

From what I understand, most knee replacement surgeries require an overnight stay, and that was certainly the case for me. This is probably a good place to say that there is a choice of anesthesia method beforehand. I went with general anesthesia and hoo boy that was not fun. General shuts everything, and I mean everything, down in the body which resulted in a quite unpleasant experience.

The next morning resulted in being awakened by staff who want you to get your butt up out of bed when the last thing you want to do is stand on your new bionic parts. But stand you do. And walk up and down steps. And back and forth in the hallway. And get in and out of a wooden car. If you can do all this, then you’re sent home, usually the day after the surgery.

Once home, it’s a regimen of physical therapy to strengthen up everything around that shiny new metal and plastic. For me, it was in-home PT for a few weeks or so, then on my own with a home routine with the option of seeing a therapist in a clinic. I got to know my neighborhood pretty well with all of the crutch-assisted walks around the block.

When Can You Resume Hiking?

As is probably the case with most hikers, I find it difficult to sit around and not be active. But I knew I had to deal with some forced downtime here. Driving was out for several weeks and a constant rotation of DVDs and laps around the living room helped to pass the time.

Everyone’s recovery time is different and your doctor will advise you as to when you can start getting back on your feet again. For me, I took my first steps onto a flat trail about a month after the surgery. A whole half mile! It wasn’t much but it was a beginning.

In retrospect, my activity level was probably ramped up a bit too soon. It can take up to a full year to completely heal, and I was just going on a partial replacement here — a full knee overhaul can take longer. Unfortunately for me, I had setbacks regarding pain and limited movement. The prosthesis itself was fine, it’s just that my mind had gotten ahead to a place that my body wasn’t ready for yet.

As active people, hikers can likely expect to recover a bit quicker than the average joe, but if you are considering undertaking knee replacement surgery, the key to a successful recovery is really sticking with the PT, if you feel “nah, I’m fine”. This is an invasive procedure that requires intense strengthening of the area around the knee. Do what the physical therapist tells you over and over and over again.

I was also told that because of the increased activity from hiking, we can expect our replacement parts to wear out a bit quicker than those of folks who are not as active. In the case of a partial replacement, it may have to be later replaced fully. A full replacement may need to be completely redone.

I’m still going, although maybe not as strong as I once was. While I’m definitely slower, I get there. These days, the replaced knee is fine, but it’s the other knee that’s the issue. It’s in the same boat and will need to be replaced, but after a difficult recovery and lessons learned the first time around, I’m in “maintenance mode” and am trying to put it off as long as I can.

If you’re dealing with arthritic knees, I feel your pain. But hiking with replaced knees can be done. Heck, look at long-time White Mountains uber-hiker Ed Hawkins. He is in his 70s, has had both knees fully replaced, and has completed the White Mountains grid eight times. That’s a staggering 4,608 four thousand footers climbed, with close to eight million feet of elevation gain.

A few caveats do apply though. Jumping off a ledge, for example, ain’t a good idea due to potential damage to the joint. Also, be mindful of twisting. It took me a while to consciously walk a bit differently to make sure I was keeping the leg straight. And for hikers that downhill ski during the winter, your doctor is probably going to say you won’t be able to do that anymore. One surgery is traumatic enough and having to do a second one to repair damage to the prosthesis isn’t a fun thing.

My advice for arthritic hikers is to stay small if needed. Hike smaller peaks, which can be just as rewarding as the big ones. Listen to your body. In time, you’ll become in tune with how far you can go and what types of terrain may aggravate things. Unfortunately, when we climb up things we also have to come down them, so using trekking poles is essential for offloading some of the effects of gravity. Anti-inflammatory medications are ok to use in moderation, but be aware of the potential side effects from long-term usage.

It’s also important to strengthen everything around that knee, including quads, glutes, hamstrings, and core. The less stress you can take off the joint itself the better. A good physical therapist can recommend a regimen of exercises to keep you going as long as possible before surgery is needed.

Some days it will be really difficult. Pain really sucks and it can wear on your mind as well as your body. But those days won’t happen all the time. If you’re passionate about being in the woods like I am, I think you’ll find that the mental benefits of being in nature will counter the physical symptoms somewhat.

With patience, a strict physical therapy routine, and mental determination, you can get back to what you love to do after knee replacement surgery. I was reminded of this when I returned to climb Mt. Moosilauke, four years after my knee replacement story began.

Ken MacGray is a freelance writer and guidebook author. He's written New Hampshire's 52 With A View - A Hiker's Guide (2nd Edition), AMC's Southern New Hampshire Trail Guide (5th Edition), and is currently working on the 31st Edition of the White Mountain Guide, also for AMC. He lives in southern New Hampshire and can usually be found wandering throughout the state's forests. You can learn more at kenmacgray.org
Previous What is Fastpacking?
Next Hiking Pierce and Eisenhower in February