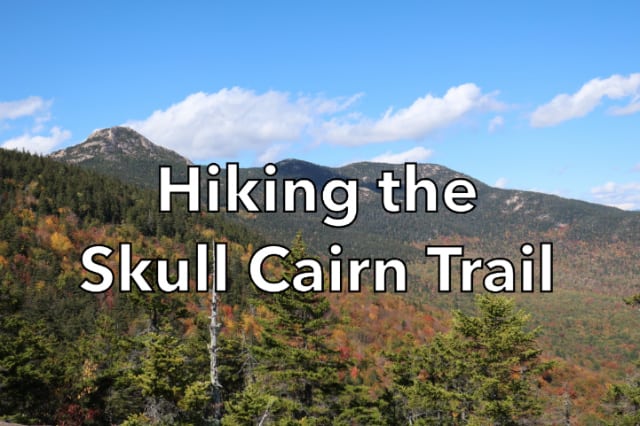 The White Mountain National Forest is riddled with decommissioned hiking trails, old logging roads, railroad spurs, and logging camps enough to keep anyone with a thirst for history and hiking off the beaten path satisfied for years to come. The Skull Cairn Trail is one such “lost trail,” as they’re called locally, that been closed down and removed from all modern maps. It climbs partway up picturesque Mt Chocorua, which is the most photographed mountain in the White Mountain National Forest.

I first learned about the old Skull Cairn Trail last winter after snowshoeing up the Hammond Trail, also on Mt Chocorua, when I met a gentleman at the trailhead who was out hiking with his dogs. He told me about the trail and the local trail system maintained by The Nature Conservancy and the Chocorua Lake Conservation Foundation, which is also not depicted on the local hiking maps popular with hikers, including those published by the Appalachian Mountain Club.

I went home after that and researched the Skull Cairn Trail by searching through the old USGS maps you can download for free using the USGS’s TopoView Browser. It lets you download historic geocoded GeoPDF maps that can be used by a navigation app like Avencia Maps. It’s an amazing resource. The Skull Cairn Trail is depicted on the 1931 USGS maps for Mt Chocorua but has been completely removed in the 1958 version. You can also find it on the 1930 Historic Topo in GaiaGPS or the Historic 1915-1945 layer in Caltopo.

The snow was too deep to make an attempt that winter, so I put the trail onto my todo list for the following autumn, which is the best time to go bushwhacking in New England. I wanted to invite a few friends along who I know are always up for that kind of historical hiking adventure.

The Skull Trail doesn’t climb to the summit of Mt Chocorua but joins the Hammond Trail just below the current Hammond-Liberty Trail Junction. You’d never know it if you weren’t looking for it and I’ve walked past the point where it intersects the Hammond Trail a half-dozen times and never noticed it.

I’ve been told that there used to be a skull on a cairn at the beginning of the Skull Cairn Trail, but it isn’t there any longer. There is still a skull higher up the trail though, hanging in a tree, although you have to keep a sharp eye to spot it. I’m not going to tell you where it is, but here’s a photo of it. Half the fun is finding it!

The best place to park to hike the Skull Cairn Trail is off Scott Rd at the Hammond Trail trailhead (See the AMC White Mountain Guide for directions). You have to follow an unsigned trail from the trailhead to the place where the Skull Carin Trail begins, but rather than describe that, I’ll leave it as an exercise for the reader to find with the maps and apps listed above.

Once you find the start of the trail, it’s quite easy to follow at least to the halfway point. While this is an old trail, you should treat it like a bushwhack since the unblazed trail does get a bit harder to find the higher you climb. It’s can also be hard to pick out the trail if there are fresh leaves on the ground.

When you start to climb steeply, be on the lookout for a large rock formation and hike up the middle of it to an open ledge with views of Chocorua Lake and Silver Lake. The trail resumes and you’ll climb to a pond, which was bone dry when we visited during this year’s drought. When it holds water, you’ll have to hike around it to find the trail’s continuation.

The trail has a few scrambles before it reaches the Hammond Trail. From there, you can follow it to the Liberty Trail and up to the Chocorua summit or head back down to the trailhead parking area to make a nice loop. The Hammond Trail is a real gem and far less crowded than the other Chocorua Trails, making this a nice loop hike if you want to hike something out of the ordinary.

SectionHiker is read supported. We independently research, test, and rate the best products. We only make money if you purchase a product through our affiliate links. Help us continue to test and write unsponsored and independent gear reviews, beginner FAQs, and free hiking guides.