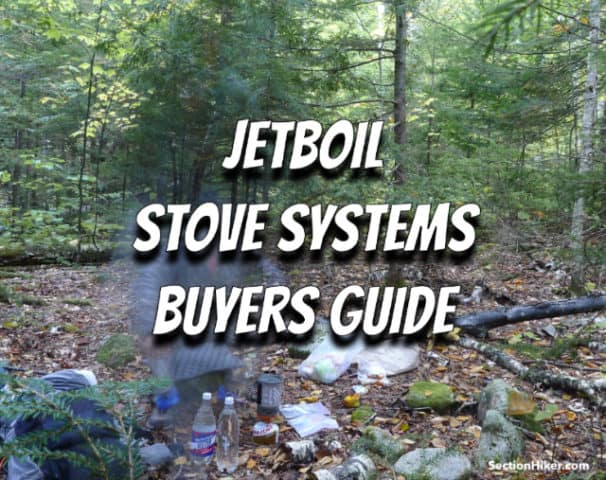 Jetboil’s group and personal cooking systems revolutionized camping and backpacking cooking when they were introduced 19 years ago. Jetboil’s signature innovation was to tightly integrate the cook pot and stove into a highly efficient and windproof cooking system that was easy-to-use, fast, and completely self-contained.

Since then, Jetboil has refined and specialized its stoves systems for a variety of needs ranging from boiling water to simmering, snow melting for winter backpacking, and base camping. Below, we explain how to choose between the different Jetboil cooking systems so you can find the one that best suits your needs and budget. 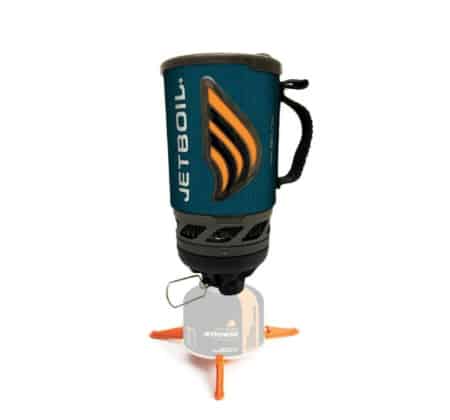 The Jetboil Flash is designed to boil water fast and as a result, it’s perfect for making coffee and rehydrating freeze-dried backpacking meals. The Flash has an insulated 1.0L cook pot with a built-in wind guard that increases fuel efficiency by 30% and comes with a plastic measuring cup, stabilizer stand, and a push-button igniter. A heat-sensitive logo turns orange when your water has boiled, while a wire flame control valve lets you adjust the flame height. While you can rehydrate soupy meals like ramen noodles in the integrated Flash pot, you have to be very careful to avoid boil overs. The Flash is ideal for 1 person and will boil 10 liters of water with a small 100 g fuel canister. 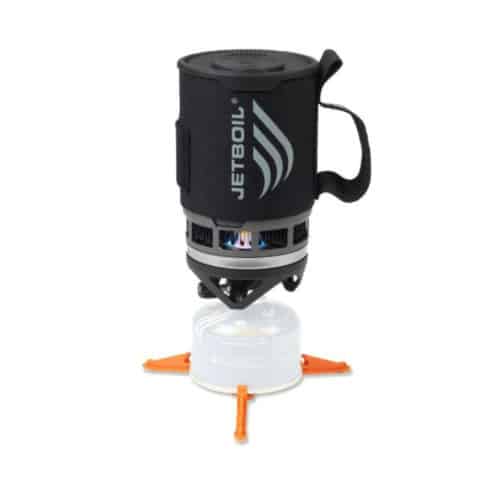 The Zip is Jetboil’s least expensive and most popular single person cooking system. It’s nearly identical to the Jetboil Flash in appearance but has a smaller 0.8L pot and a stove that’s 50% less powerful, so it takes longer to about a minute longer to boil 2 cups of water. There’s also no built-in igniter, so you have to light it with a match, lighter, or fire steel. The Zip is ideal for a single person and is slightly lighter weight than the Flash. Personally, I prefer the Zip over the Flash because it packs up smaller. I can pack a 100 g fuel canister inside the pot so it’s easy to throw into a backpack or my car whenever I want to carry a stove on a trip. Push-button igniters all wear out and fail eventually, so not having one is one less thing that’s going to break. 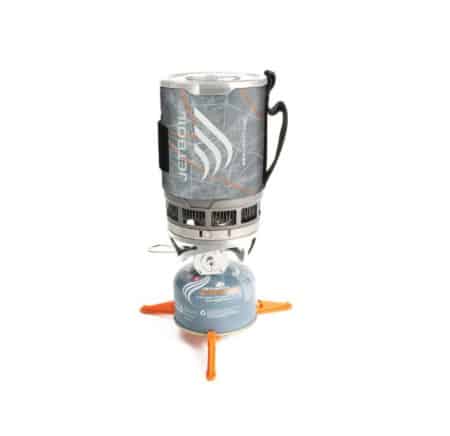 The Jetboil MicroMo has the same pot size as the Jetboil Zip, but its stove has more power, comes with a push-button igniter, and has a built-in pressure regular so it’s better for cold weather use. A pressure regular helps maintain a steady flow of fuel from a canister to the stove as the gas pressure in the canister drops. This occurs when the outside temperature falls or as the gas in the canister is used up. The MicroMo will still only burn canister gas down to about 20 degrees Fahrenheit, but it will burn hotter and more forcefully than the unregulated Zip or Flash stoves until the pressure in the canister drops below the minimum pressure required by the stove to operate. The MicroMo is also designed to simmer, so you can cook things like scrambled eggs or pasta with cream sauce, although it’s easier to do this with the Jetboil MiniMo. Like the Zip, you can expect to get boil 12 liters of water with a 100 g fuel canister. 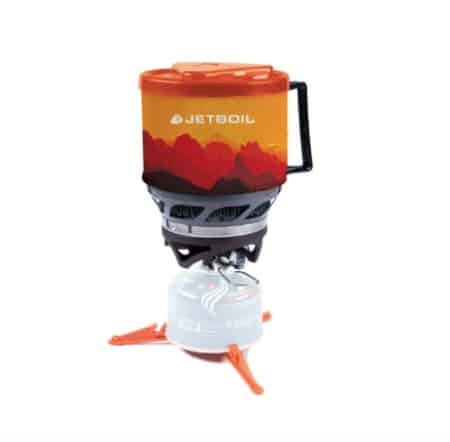 The Jetboil MiniMo is similar to the MicroMo except that it has a larger and wider 1L cook pot that makes it easier to cook with. Besides that, it has the same built-in igniter, pressure regulator, stove, and simmer control as the MicroMo. If you plan on simmering food for 1 or 2 people, the MiniMo’s shape is much easier to cook with because the squat shape makes it easier to stir the contents with a spoon. 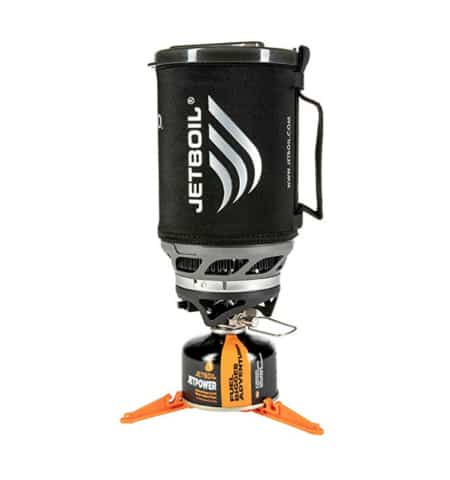 The Jetboil SUMO has the same features as the MiniMo, but with a 1.8L cook pot instead of a 1.0L one. It’s designed for couples or small groups, but is underpowered for that task, with the same 6000 BTU power stove as the MiniMo and MicroMo.  While you can simmer with the SUMO, I’d recommend upgrading to the 10,000 BTU Jetboil MightyMo stove if you plan to cook for more than two people or want to use wider and higher capacity pots and pans for meal preparation.

Check for the latest price at:
Moosejaw | Amazon 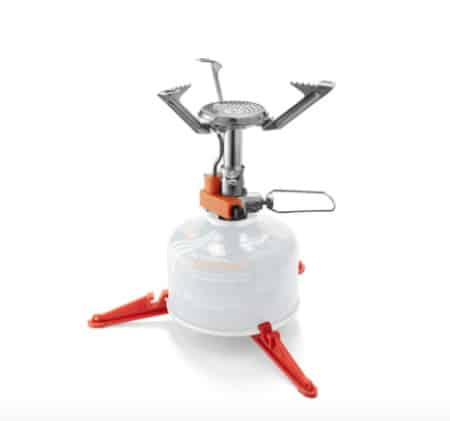 ]The Jetboil MightyMo is a powerful but standalone isobutane canister stove with a 10,000 BTU output. This is useful if you want to boil a big pot of water fast for hungry scouts. The MightyMo can be used with third-party cook pots and skillets from other manufacturers although it is optimized for use with the giant Jetboil 5L Fluxring cook pot, the smaller Jetboil FluxRing 1.5L cook pot, and the FluxRing Frying Pan, which require less fuel to heat than conventional cooking pots. The MightyMo is also compatible with the pots in the Jetboil Flash, Zip, MicroMo, or MinoMo cooking systems if used with the Jetboil Pot Support. 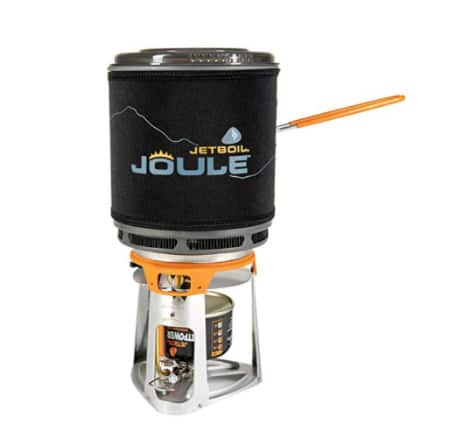 The Jetboil Joule is designed for cold-weather performance with a 2.5 liter integrated cook pot that’s optimized for snow melting. Canister gas doesn’t burn under 20 degrees Fahrenheit because the liquid fuel inside the canister can’t vaporize in the cold. However, it will burn if you flip the canister upside down and burn the canister fuel in its liquid form in temperatures as low as 10 degrees, using a specialized inverted canister stove like the Joule. The Joule is a high-powered 10,000 BTU stove with a regulator and igniter, as well as the ability to simmer. While it is designed for cold weather use, the Joule can also be used warmer temperatures for group cooking.

Check for the latest price at:
Moosejaw | Amazon 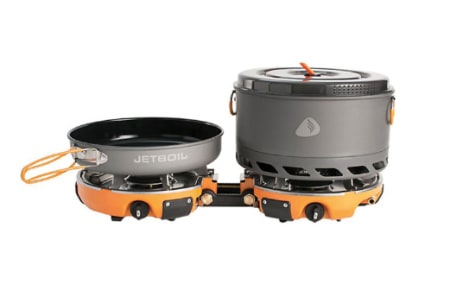 The Genesis Basecamp Cook System burns propane (in the green 16.4 oz bottles) like many traditional camping stoves instead of isobutane canister gas. It includes two burners, a 5L cook pot, and a 10″ skillet, that fold together into a compact stacked unit that’s easy to pack in a backpack for basecamp cooking. Try that with a class Coleman 2 burner stove! The two stoves are compatible with Jetboil’s Fluxring pots as well as regular cook pots from other manufacturers. Both stoves have igniters, regulators, and simmer controls like Jetboil’s other high powered stoves. They both run off the same propane canister and are easy to dismantle for cleaning. A windscreen and carry case is also included. Personally, I think this stove system is outrageously expensive, although it packs up way more conveniently in a backpack than other propane-powered options. 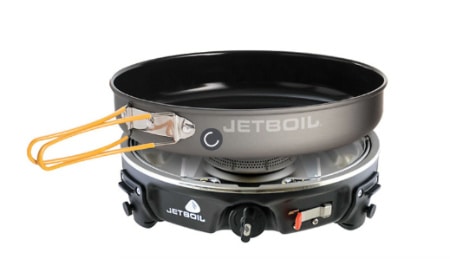 The HalfGen Basecamp Cook System can be used by itself or as part of a larger basecamp cook system like Genesis Basecamp System, by daisy-chaining stoves off the same propane canister. It comes with a 9″ skillet good for cooking pancakes or frying fish, but can also be used with the Jetboil’s Fluxring pots, or pots and pans from other manufacturers. It has 10000 BTUs of heat output, a regulator, igniter, and simmer control like the Genesis. A windscreen and carry case are also included. Like the Genesis 2 above, I think this stove system is way overpriced and my preference would be to pack a frying pan and a regular simmering isobutane canister stove.

BTU stands for British Thermal Unit and is used to measure the heat output of stoves and fuels. A single BTU is the heat required to raise 16 ounces of water one degree Fahrenheit. Isobutane canister camping stoves typically produce between 4000 and 11000 BTUs.

Cooking System. Also called a Stove System. An integrated set of components required for camp cooking that pack up together into a compact unit. It usually includes a stove, pot, pot cozy, pot handles or a gripper, pot lid, scrubbing brush, measuring cup, and pot stand. Some cook systems are also large enough to pack a fuel canister inside for ease of transport.

Igniter. Also called a Piezo-Igniter. Produces a spark to ignite your fuel without matches or a lighter. They tend to wear out with use but can be replaced on some stoves. Igniters are often left off basic models and included as a higher-end feature on canister stoves.

Fluxring. Also called Heat Exchange Coils or Fins. These are metal coils soldered to the base of a cook pot to hold heat and transfer it to the cook pot even when the stove has been turned off. They also provide wind protection and have the potential to reduce fuel requirements by 30%.

Previous MSR MiniWorks EX Water Filter Review
Next What is the Difference between Titanium and Aluminum Camping Cook Pots?