This is a list of long-distance trails in the US that are at least 100 miles in length and are primarily footpaths. Most of these trails are maintained by hiking clubs and outdoor recreational organizations. Please consider joining these organizations, becoming a trail maintenance volunteer, making a donation, or purchasing merchandise from their website stores. These are all great trails, so get out there and hike them. 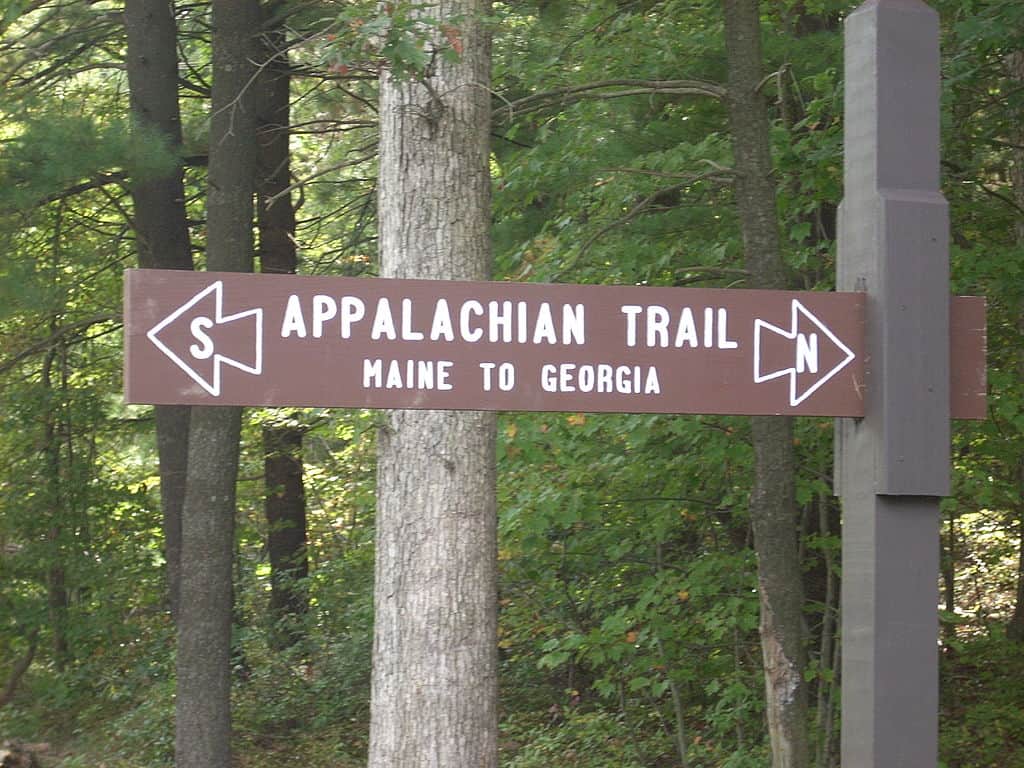 Probably the best known long-distance trail in the US, the Appalachian Trail spans 2,178 miles from Maine to Georgia. Many local trail organizations contribute time and effort to maintaining sections of the trail.

The Allegheny Trail is a 287.81-mile north-south trail starting at the PA/ WV state line running north/south on roads and trails through the Allegheny Highlands including the Monongahela NF in WV and the George Washington & Jefferson NF in VA ending on the Appalachian Trail. Volunteer workers maintain all sections of the Allegheny Trail, which is marked by 2″x 6″ yellow blazes. Visit the West Virginia Scenic Trails Association for more information. A guidebook is available in their online store. 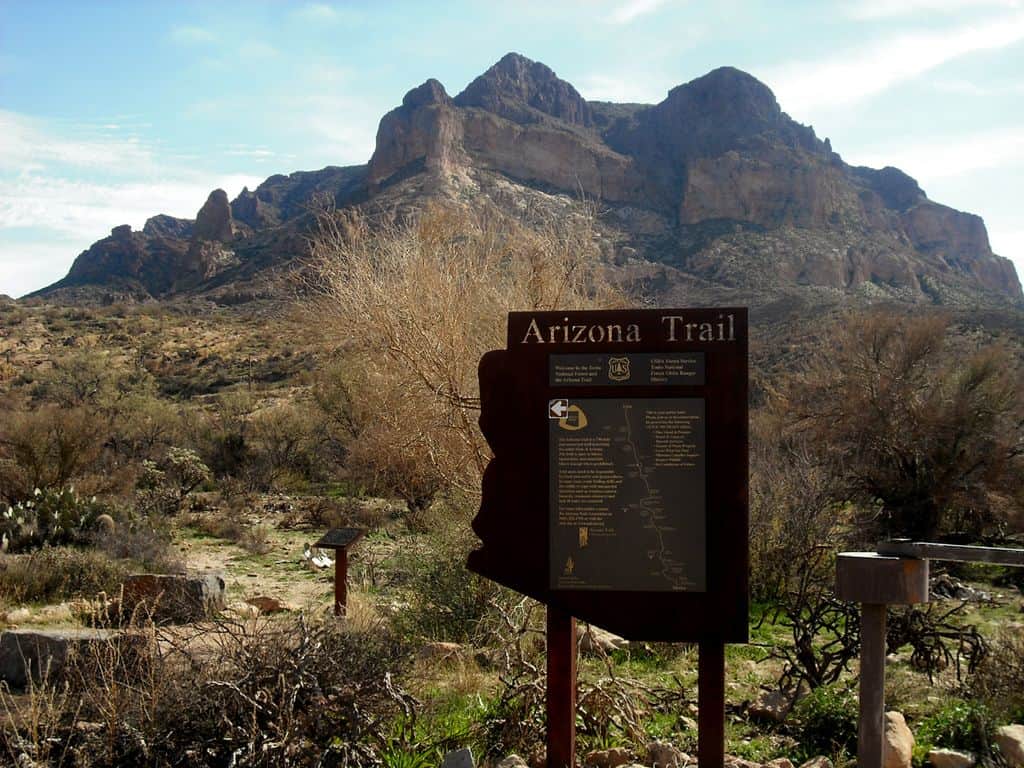 The Arizona Trail is a primitive long-distance trail, nearly 800 miles long, that traverses the state of Arizona from Mexico to Utah. The rail is broken into 43 sections that are 11 to 35 miles in length. The AZT is maintained by the Arizona Trail Association which publishes The Arizona Trail Guide (which is also available for the kindle).

The Benton MacKaye Trail runs through the Appalachian Mountains of the southeast US for nearly 300 miles and passes through some of the most remote backcountry of Georgia, Tennessee and North Carolina.

The Buckeye Trail forms a circuit around the state of Ohio and is neat 1,444 miles in length. There are 26 section to the Buckeye trail each named after a town or trail feature.

The Cohos Trail is a 162 mile trail in northern New Hampshire that stretches across the state’s most remote and unpopulated terrain. 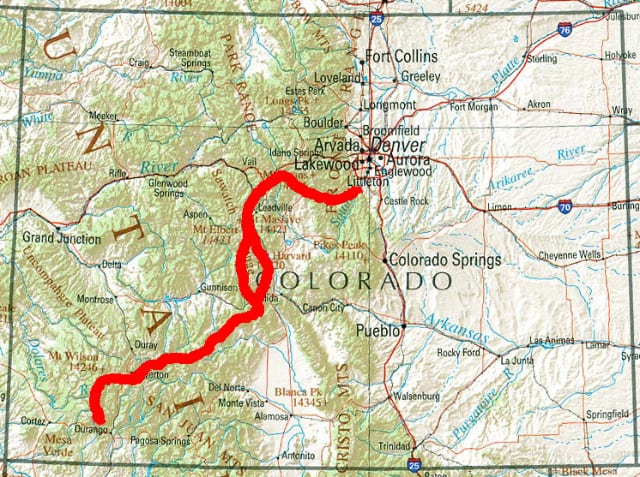 
The Continental Divide Trail links Mexico to Canada, passing through the states of Montana, Wyoming, Colorado and New Mexico. At this time, the CDT is not yet completed although significant portions have been completed in all 4 states. The Continental Divide separates the rivers and streams that flow east to the Atlantic Ocean from those that flow west to the Pacific.

The Finger Lakes Trail is 562 miles long and connects the Catskills with the Allegheny Mountains passing through remote sections of New York State.

The Florida Trail stretches the length of the State of Florida for nearly 1,400 miles. Portions of the trail that cross private land can only be hiked if you are a member of the Florida Trail Association, so join now.

The Foothills Trail is a 76 mile woodland path along the Blue Ridge Escarpment in northwestern South Carolina.

The Horse-Shoe Trail is a 140-mile hiking and equestrian trail that runs from Valley Forge to the Appalachian Trail in southeastern Pennsylvania. The trail runs roughly parallel to the I-76 turnpike from Harrisburg to Valley Forge.

The John Muir trail runs for 211 miles from Yosemite Valley to Mt. Whitney, in California. The trail is considered one of the most picturesque hikes in the US and trail elevation ranges from 8,000 feet to nearly 15,000 feet. Wilderness Permits are required to camp on the trail.

The Lone Star Hiking Trail is the only long-distance National Recreation Trail in Texas. At 128 miles (including loop trails), it is also the state’s longest continuously marked and maintained footpath. The trail meanders through flat and gently rolling forests of pine, oak, and mixed hardwood, and cypress swamps and bayous in the famed Big Thicket area in east Texas, in the Sam Houston National Forest.

The Long Path is a 326 mile hiking trail extending from the George Washington Bridge, north to John Boyd Thacher Park near Albany. Future plans are to extend the trail to the Mohawk River and eventually into the Adirondaks.

Built by the Green Mountain Club between 1910 and 1930, the 272 mile Long Trail is the oldest long-distance trail in the United States. The Long Trail follows the main ridge of the Green Mountains from the Massachusetts-Vermont line to the Canadian border as it crosses Vermont’s highest peaks. It was the inspiration for the Appalachian Trail, which coincides with it for one hundred miles in the southern third of the state.

The 285 mile Midstate Trail is the longest continuous footpath in Pennsylvania running from the Mason Dixon Line to the Pennsylvania/New York State border. The trail features spectacular vista from mountaintops and the remoteness of wild forests and streams.

The Monadnock-Sunapee Greenway is a 50 mile hiking trail linking Mount Monadnock with Mount Sunapee in southwestern New Hampshire. The trail winds along the Monadnock Highlands that separate the Connecticut and Merrimack River watersheds. 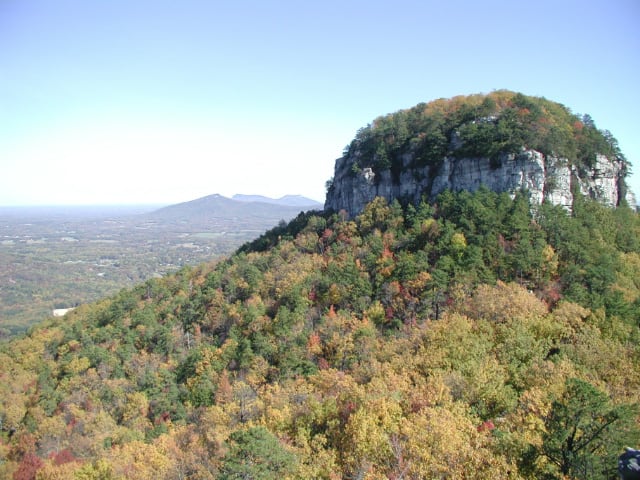 The Mountains-to-Sea Trail is a simple footpath stretching almost 1,000 miles across North Carolina from Clingmans Dome in the Great Smoky Mountains to Jockey’s Ridge on the Outer Banks. More than just a walk in the woods, the trail traces the diversity that is North Carolina. Experience ancient mountains and small Piedmont farms, coastal swamps and colonial towns, changing textile villages and barrier islands. More than 500 miles of footpath are now completed. With temporary routes on backroads and bicycle paths, hikers can now follow the trail on an adventure across North Carolina.

The New England National Scenic Trail (NET) is a 215-mile trail route that has been in existence for over half a century. It travels through 39 communities in Connecticut and Massachusetts, and is comprised primarily of the historic Mattabesett, Metacomet, and Monadnock (M-M-M) Trails.The route showcases classic New England landscape features: long distance vistas with rural towns as a backdrop, agrarian lands, un-fragmented forests, and large river valleys.

The 133 mile Northville Placid Trail passes through what many consider the wildest and most remote parts of the Adirondack Park, notably the high plateau that encompasses the Spruce, West Canada, and Cedar lakes area, along with that of the Cold River.  The highest point the N-P Trail reaches (3008 ft) is at the crest of the ridge to the E of Blue Mt. and of Tirrell Pond.

The Ouachita Trail stretches 223 miles through the beautiful Ouachita Mountains of Arkansas and Oklahoma.

The Ozark Highlands Trail is 165 miles long and is located in northwest Arkansas.

The Ozark Trail is 350 miles of trail that wind through the Missouri Ozarks, part of a 25-year-old concept to run a trail from St. Louis to the Arkansas border and eventually connect with the Ozark Highland Trail in Arkansas to create a 700-mile through-trail.

The Pacific Crest Trail is 2,650 miles long and zigzags its way from Mexico to Canada through California, Oregon and Washington. The trail passes through a wide variety of habitats including desert, old-growth forest and alpine back country.

The Pacific Northwest Trail is 1,200 miles long and runs from the Continental divide to the Pacific, passing through the Rocky Mountains, the Selkirk Mountains, Pasayten Wilderness, the North Cascades, the Olympic Mountains and the Wilderness Coast.

The Sheltowee Trace National Recreation Trail traverses nearly 290 miles across narrow ridges and deep ravines in the Daniel Boone National Forest and is considered the “backbone” of an expansive interconnecting trail system. Many other trails link to the Sheltowee Trace enabling easier day hiking loops and challenging multi-day backpacking trips.
From north to south, the trail travels from the Knobs region to the Cumberland  Plateau in southern and eastern Kentucky. Old homesteads, oil and gas wells and logging tracts can be seen along the trail, representing the remnants of past land uses that have occurred over time. In 1979, the Sheltowee Trace was officially dedicated as part of the Daniel Boone National Forest trail system. The trail is named in honor of Daniel Boone. Sheltowee (pronounced shel-toe-ee) is the name given to Boone by Chief Blackfish of the Shawnee tribe, meaning “Big Turtle.”

The Superior Hiking Trail is a 205 mile long footpath that follows the rocky ridgeline above Lake Superior in northeastern Minnesota from Two Harbors to the Canadian border. The trail has trailheads with parking lots every 5 to 10 miles, making it ideal for section hikers, including 92 fee-free campsites.

The Tahoe Rim Trail is a 165 mile loop around Lake Tahoe. About 50 miles of the trail overlap with the Pacific Crest Trail.