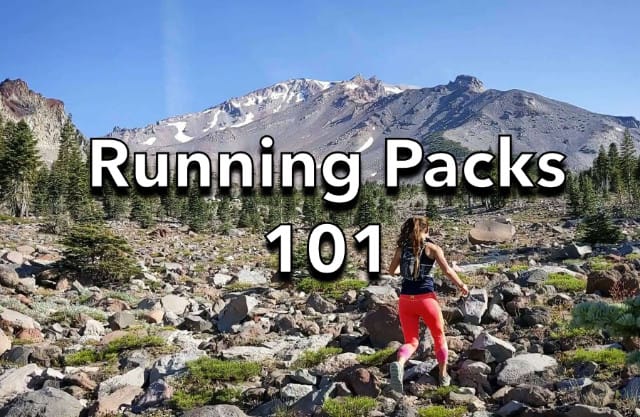 Not All Packs Are Meant For Running

Okay, it’s a given that not all packs are made for running, but it bears stating this fact because running packs differ from other backpacks in many ways. All of the differences in fit, features, and storage add up to a pack that you can actually comfortably run in. You’ll understand this first hand if you try running in anything other than a running pack. Try going for a run in your run-of-the-mill Osprey hiking pack and you’ll wind up with an aching neck and shoulders… and a whole lot of chafing, which you’ll be keenly aware of the moment you take a shower.

Some running packs have straps that are seamlessly integrated into the rest of the pack, wearing more like a vest. There are some running-specific designs that fit very closely to the body and are made almost entirely of stretchy material to allow for a snug fit. This combination minimizes bouncing and lets the chest expand and contract without constricting.

Vest-style packs are best for racing or shorter trail runs where you don’t have to worry about carrying a lot of extra gear, food, or water. But vest-style running packs aren’t great to cross over as a hiking pack because they tend to have limited storage and sit high up on the back – not ideal for carrying your ten essentials.

Other running packs can be more versatile in fit and function and can crossover as a hiking or adventure pack. You may also notice that the shoulder straps on a running pack are contoured to sit closer to the neck and away from the armpits: this is to minimize rubbing and irritation and allow for an unrestricted arm swing while running.

Running-style packs have vastly different straps than backpacking packs. They tend to be slimmer with very little to no padding. This is because running packs aren’t meant to carry a lot of weight – usually just a few essentials like snacks, some water, an extra layer, and a small first aid kit – so padding is not necessary. Running pack straps also have very little to no stiffness and they are made to breathe, very different from the tough material and sandwiched foam of a traditional backpack. The nylon webbing used in running packs is slender and the buckles are small and lightweight.

Unlike multi-day backpacks, running packs don’t have rigid frames. Backpack frames help distribute weight and provide structural support to keep the pack from collapsing. Runners typically don’t carry much weight in their packs, nor do they carry a lot of gear, so a rigid frame isn’t necessary and would just add weight as well as additional pressure points that may cause chafing.

Storage solutions for running packs are quite different from traditional backpacks. One of the biggest differences are the accessible pockets on the front of the shoulder straps. These pockets allow the runner to easily grab snacks or other important items, or even carry special flasks for hydration that they can sip from directly while moving.

Most of the time, the main compartment of a running pack is made of stretchy material so that the runner can stuff items in and they are kept snuggly in the pack. Bouncing and jostling quickly suck energy and can cause extreme discomfort, so the more snug the items in that pack are, the better.

Some running packs have gear loops and compression straps, while others do not. Gear attached to the outside of a running pack can bounce around and be irritating.

Another unique storage feature in running packs is trekking pole storage. Runners who use poles sometimes want to stash them in order to free their hands when running with trekking poles.

There are many different kinds of specialized running packs available these days and the options are always expanding. As trail running continues to grow in popularity, it’s only natural for boundaries to be pushed. Various sports are being hybridized (imagine the intersection of running and mountaineering), and gear evolution continues alongside the evolution of the sports.

See also: What is Fastpacking?

For example, some packs are made specifically for running in the mountains, like the Ultimate Direction Mountain Vest that has storage for an ice axe, while others are made for running long distances along with overnight stays in the backcountry, such as the Six Moon Designs Flight 30. Some of these backpacks deserve their own categories because they are no longer in the realm of “just a running pack.” They are neither a running vest, nor a traditional backpack – they are hybrids and can cross over between running packs/vests and more traditional backpacking packs.

Ashly Winchester spends most of her time roaming and running around the wild spaces of California and the Pacific Northwest. She has an insatiable appetite for adventure, which led her to become a mountain guide on Northern California's gem, Mount Shasta, and set a goal of climbing all of the Cascade volcanoes. She is an avid hiker and backpacker, but really comes alive when she's running long distances on trails, so it makes sense that she has started combining these activities into fastpacking trips. Even though she likes to move fast, Ashly also likes to slow down and study native plants and their traditional uses. You'll often find her examining plants on the trail and taking photos of them for identification. Find Ashly on her instagram, @ashly.winchester, or tune in to her podcast over at womxnofthewild.com
Previous Seek Outside Eolus Tent Review (2P)
Next The DryGuy DX Forced Air Boot Dryer Review