What is a Backpacking Sleep System? 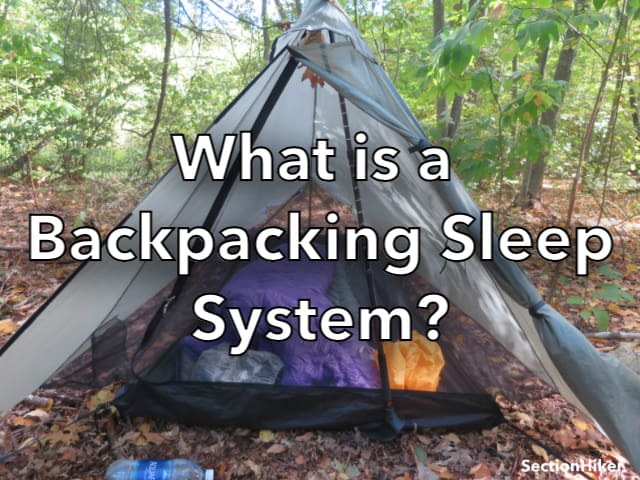 A backpacking sleep system refers to the collection of gear and clothing used for sleeping in camp. It’s called a system because the items have to work together and complement one another to perform a common function. For example, a sleeping pad, sleeping bag, and a pillow are all common components of a sleep system.

A backpacking sleep system is also one of the Big Three:

The gear in these categories is usually the heaviest stuff on your gear list and provides the best bang for the buck in terms of gear weight reduction if you want to lighten your backpack. There are additional systems that backpackers use to categorize gear including a Clothing System, Electronics and Navigation, Health and Hygiene, Cooking System, and so on.

It’s important to understand that a single piece of backpacking gear or clothing might have multiple functions and be part of multiple gear systems. For example, the plastic bag that you use as a waterproof pack liner can also be used as a bivy sack to protect your sleeping bag from rain/wind/condensation or as a poncho in an emergency.

There will also be some dependencies between different gear systems, especially between a shelter system and a sleep system. For instance, most people who sleep in a hammock prefer a top quilt and bottom quilt for sleep insulation instead of a sleeping bag and inflatable pad because they’re easier to use.

Here are three sample sleep systems: one each for tent camping, tarp camping, and hammock camping.

If you camp in a tent, you’re likely to have a pretty basic sleep system with a sleeping bag or top quilt, perhaps a pillow, a warm hat, and sleeping clothes. The temperature ratings of most sleeping bags and quilts also assume you’re wearing clothing and a hat which is one reason to wear them if you sleep cold, although they can also be used as warm backup clothing in a Clothing System.

Sleeping under a tarp is usually much more exposed than sleeping in a tent because you have less insect, wind, and rain protection. One way to augment a sleep system for tarp camping to protect yourself against bugs, cold-robbing wind, and rain splashback (under the tarp walls) is to add a sleeping bag cover or ultralight bivy sack with insect netting over the face and head to your sleep system.

If you sleep a quilt, many people also wear an insulated down hoody or hooded jacket to provide their head and shoulders with additional insulation.

Sleep System for Hammock Based Camping

Most hammock campers prefer a top quilt and an underquilt instead of a sleeping bag and sleeping bag because they’re less of a struggle to use when you’re not on the ground.