A Bear Encounter in the North Country 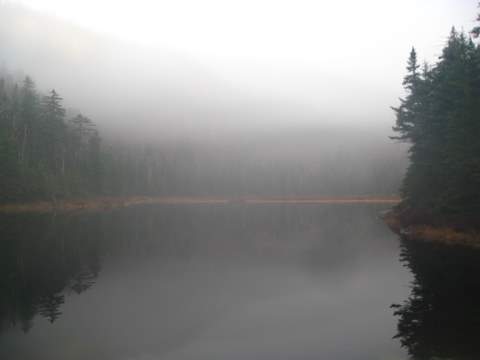 I had a benign bear encounter this weekend at Lower Gentian Pond on the Mahoosuc Trail, way up in the northern part of New Hampshire, near the Maine state line. I stupidly left some beef jerky in my rain jacket which was hanging inside my tent vestibule overnight. At about 4am, I felt a big nose poke me in the back through the vestibule wall and the inner tent. I made some noises, thrashed about in my sleeping bag, and then heard a big animal trot away.

At first I thought it was a moose, but when I woke up in the morning, I didn't see any moose tracks around my tent. We had a lot of rain the previous night and I'd have expected to see some sign of such a big animal. So now I'm convinced that it was a bear.

I guess I was lucky. I had thought that most bears would be asleep by November 15th, but upon further research I've found that bears start to hibernate as late as December 1st in New England. I'll take that as a lesson to be more careful this late in the season, especially when I'm hiking solo.

Under the circumstances, it was good that I was using an Ursack, lined with an odor-proof OPsack, to protect the rest of my food from other critters. With sunset arriving so early in the evening at 4:15 pm, it's a pain to hang a bear bag and risk beaning myself with a rock in the dark.

The last time a bear got this close to me was in the Catskills a few years ago.  A bunch of us were camping at a state campground outside of Phoenicia, NY and a bear tripped over my tent guylines at night. I remember being so paralyzed with fear that I couldn't even make a sound.

This time I wasn't as much afraid, as annoyed. Maybe that's the benefit of experience with these sorts of things. I promptly fell asleep afterwards, until dawn, when my alarm went off. Mysteriously, the jerky had come out of the plastic bag it had been tucked into, so maybe the bear had some, afterall.