Are Vibram Soles Good for Hiking and Backpacking? 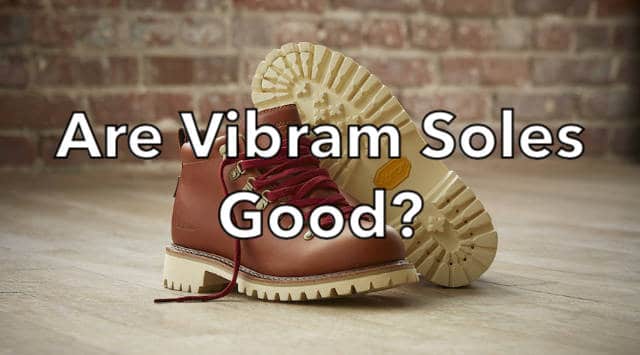 There was a time when Vibram outsoles were the best in the business and used on the majority of hiking boots made. Vibram was the first company to make a vulcanized rubber outsole in 1937, including a standard lug pattern called the Carrarmato (meaning “tank tread”) which is instantly recognizable (above) by hikers worldwide.  They build up a huge business, invested heavily in product development, manufacturing, and quality control, and expanded into other markets including climbing and mountaineering, work boots, running shoes, motorcycle boots, and lifestyle shoes, among others.

Many shoe companies came to Vibram and had them create specialty soles for their shoes, which were becoming increasingly specialized for different sports, seasons, and markets, including companies like Vasque, Danner, Scarpa, and others. If you look at hiking boots, mids, trail runners, and other outdoor shoes today, every single new shoe has its own unique outsole. That’s diluted that exclusiveness of the Vibram brand since it’s hard to tell if any of these unique the outsoles make any difference at all and which is best.

As the outdoor shoe and apparel market expanded, more and more shoe companies started developing their own outsoles to reduce their costs instead of outsourcing their design and manufacture to Vibram. Big beefy hiking and mountaineering boots have been superseded by lighter weight footwear in the intervening years, diminishing demand for the outsoles that Vibram specializes in. Gone also, are the days of replaceable soles and heavy hiking or mountaineering boots, only to be replaced by mids and trail runners that you throw away when they wear out.

Today, the Vibram brand name is poorly differentiated when it comes to soles for hiking shoes and boots, much like the other component companies that license their technologies to third parties including Gore-Tex, Primaloft, Nalgene, Cordura, Polartec, and Easton. They make so many different product variants that you can’t assume that their inclusion in products provides any discernable performance advantage anymore.

My advice. Don’t be fooled by marketing brand names like Vibram but evaluate each product you’re considering individually for its intended purpose.

Philip Werner has hiked and backpacked over 7500 miles in the United States and the UK and written over 2500 articles as the founder of SectionHiker.com, noted for its backpacking gear reviews and hiking FAQs. A devotee of New Hampshire and Maine hiking and backpacking, Philip is the 36th person to hike all 650 of the hiking trails in the White Mountain Guide, a distance of approximately 2500 miles, completing a second round in 2021. Philip is the author of Backpacking the White Mountain 4000 Footers, a free online guidebook of the best backpacking trips in the White Mountains in New Hampshire and Maine. He lives in New Hampshire.
Previous Petzl e+LITE Headlamp Review (50 Lumens)
Next Why don’t I have an Appetite on Backpacking Trips?