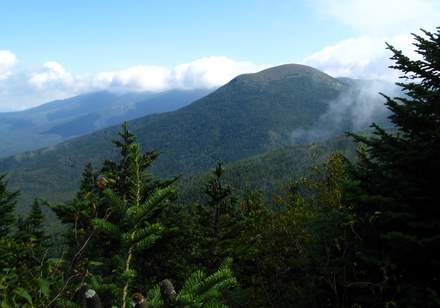 I had a magnificent hike last Sunday, completing the lower half of the Southern Presidential Range in the White Mountains. During this hike, I completed another 9.0 miles of the AT. Total distance for the day was 13.1 miles over 9 hours with a total elevation gain of about 3,000 feet. Major peaks included:

Trail conditions were surprisingly good all day despite the hurricane that passed through the area on Saturday. Down south in Massachusetts, we’d had 3-5 inches of rain. I was concerned about what the trail conditions would be like on Sunday, but the heavy rain bypassed the Whites and the trails were unaffected. Afternoon thunderstorms were forecast for Sunday afternoon, but that’s normal during August in the Whites. Still, thunderstorms were a real threat on this section due to the high level of exposure along most of the day’s route. 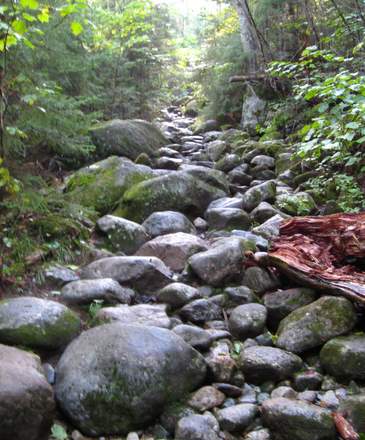 I started my hike from the Crawford Path Trail Head off Mt. Clinton Road. I climbed Crawford Path for 3 miles until I broke treeline and came to the intersection with the Appalachian Trail. My original plan for the day was to summit Pierce and continue south to Crawford Notch. But when I saw Mt Eisenhower in front of me (top photo), I was just blown away at how beautiful it was in the sunlight. The summit has a perfect egg shape and the west face plunges a dramatic 2,000 ft. in one mile. From where I stood, the summit felt so close I couldn’t resist bagging it.

After climbing Mt. Eisenhower, I continued down the north face of the mountain until I came to the intersection between the AT and the Edmands Path. I did this to set up my final section in the Southern Presidentials to the base of Mt. Washington (6,288 ft) summit cone (in cloud, above), requiring climbs over Mt. Franklin (5,001 ft) and Mt. Monroe (5,372 ft). I hope to hike this next weekend, weather permitting. 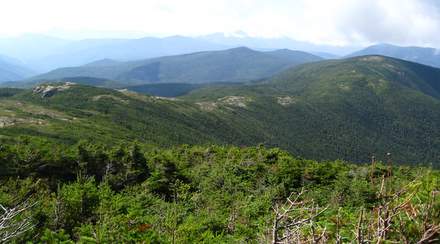 After reaching the Edmands Path, I looped back around the southern side of Eisenhower on the AT, which doesn’t go over the summit, and followed the exposed ridge (above) back to Pierce which was an easy climb. 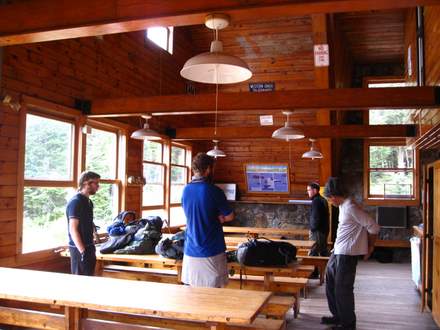 From there, the trail got increasingly wet as it passed through an area carpeted with water-saturated, sphagnum moss, before plummeting down a steep, rocky slope to the Mizpah Spring Hut, one of the AMC’s mountain huts. I popped in for a quick bite to eat from my food bag and to refill my water bladder. There were a couple of AT Thru-hikers hanging out inside, waiting to feast on scraps from breakfast.

I probably saw a dozen thru-hikers last Sunday, but it’s starting to get late in the season. They still have 45 days left to hike the final 330 miles of the AT to Baxter State Park before it closes for winter on October 15th, but about 250 of those 330 miles are tough as hell. 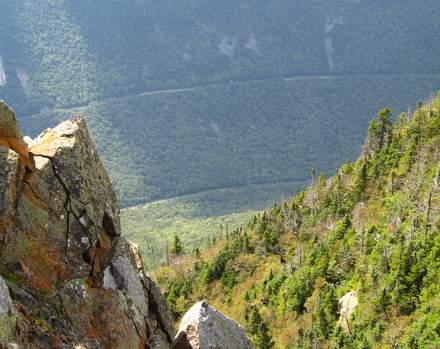 After Mizpah, I hiked another 3 miles to Mt Jackson and after that Mt. Webster. Jackson is pretty unremarkable except for the muddy bogs surrounding its rock summit, but Webster is incredible because its south face plunges about 2,300 feet to Crawford Notch. 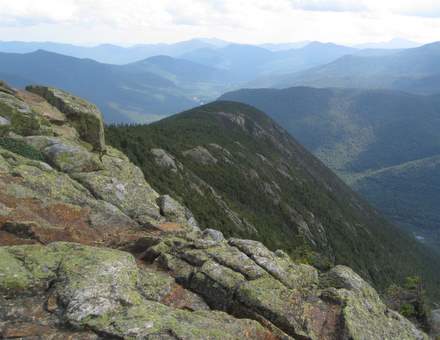 From the summit of Mt. Webster, the AT travels south for 3.4 miles along the Webster Cliff Trail, right on the edge of the cliffs. The trail is very rocky in places and a bit scary. The whole time I was walking down this trail, I kept thinking, people climb this in winter. Let me tell you, there’s little room for error in a few spots and by the time you could roll over to break with an ice ax, you’d be airborne. But the exciting part of the Webster Cliff trail is only about 1.5 miles long. After that, you descend below treeline, steeply and by many switchbacks, down to the Saco River in Crawford Notch.

From there, it’s a short walk to Rt 302, which runs through the Notch. I made it down to the road by 4:30 PM and started hitchhiking to get back to my car which was parked about 4 miles north. I was limping by this point. But car after car passed me by, so I started walking until I got a ride about a mile down the road. It’s a bummer when dozens of cars pass you by and you are standing right next to an Appalachian Trail sign in the middle of prime hiking territory. I was a little smelly and muddy, but I looked pretty authentic, not like an ax murderer…

The guy who finally picked me up was from Texas and had been hiking in the area for the past week. He was living in Vermont, helping his brother run a goat farm for a few months while planning a new career in the Earth Sciences.  His name was John and we got to talking. John was kind enough to take me right back to my car, sparing me any further limping, and I drove home elated after another wonderful day in the Whites.

SectionHiker is reader-supported. We independently research, test, and rate the best products. We only make money if you purchase a product through our affiliate links. Help us continue to test and write unsponsored and independent gear reviews, beginner FAQs, and free hiking guides.
Previous Asolo Flame GTX Hiking Boots
Next AT Section Hike: Westside Trail to Edmands Path