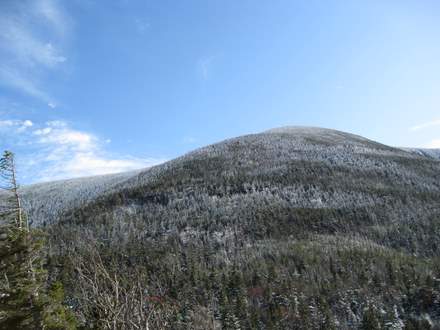 I was supposed to go backpacking on the Appalachian Trail last weekend, but I decided that it would be prudent to cancel the trip. Winter had arrived about 1 month early, quite unexpectedly, with snow and ice on many of the high peaks over 4,000 ft including all of the ones on my planned itinerary. In addition, temperatures have been running 15-20 degrees F below normal with wind chills above treeline of 5-15 below zero. In the end, I decided that I wasn't quite ready to commit to a winter backpacking trip without more preparation. I hadn't carried a 30 lb pack since last winter (my 3 season pack weighs about 12 lbs) and I didn't want to do the trip solo, which had been my original plan.

Regardless, the weather on Saturday was supposed to be good so I decided to day hike a part of my planned route, climbing up to the AT on the Gale River Trail and then climbing South Twin Mountain, where I left off last March. This was another one of my micro section hikes: it took me 8 and a half hours to hike 11.8 miles, including 3,600 ft of elevation gain, in order to finish another 1.4 miles of the AT. I also bagged another 4,000 footer, Galehead Mountain (4024 ft), to add to my White Mountain 4000 footer list.

Compared to last weekend's traffic jams before the big freeze, there was almost no one in the mountains on Saturday. The trail head parking lots which are usually full to overflowing, were virtually empty. The snow and ice from this past week has pretty much blown the fall foliage off the trees over 2,000 feet, which was at peak last weekend. It looked a lot like winter, which is a bit of a shame, because I really enjoy hiking and backpacking in post peak conditions. On the other hand, winter hiking and backpacking are fun too and certainly a bigger challenge, which is part of the allure for me. 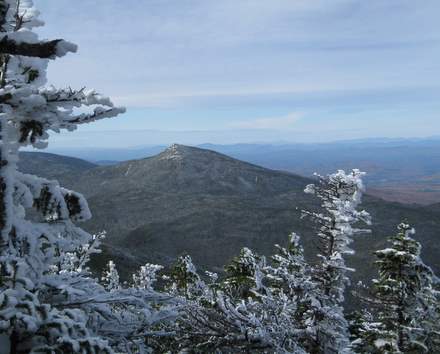 I started my hike at the Gale River trail head just off Rt 3 and climbed up the Galehead Hut, at the foot of South Twin and Galehead Mountain. It took me about 3 hours to hike 4.6 miles, starting at 1,500 ft and climbing to 3,800 ft. Like most trails in the Whites  with significant ascent, the Gale River Trail is full of rocks and boulders all the way up, making it a challenging walk. On the other hand, it is also a beautiful trail. This was my first time up it and I plan to come back again and again. The first 2 miles parallel the Gale River, a fairly wide creek, full of boulders and trees swept down from the mountains during the snow melt floods. Below 2,000 feet the forest still retained it's fall colors and it was a pretty sylvan walk.

The bottom of the trail was free of snow and ice, but I needed to put on some extra traction at 2,100 ft, and opted for my Katoola Microspikes. Throughout the day, I only encountered about 3-4 inches of snow max, but there was a lot of black ice on rocks, especially at the six stream crossings I had to negotiate. 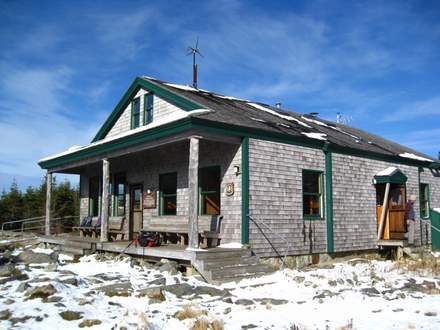 I got up to Galehead Hut by 10:30 AM and had an early lunch with French Bread and Genoa Salami, one of my favorite trail lunch combos. After a nice break, I started the 0.8 mile and 1,100 ft ascent up South Twin. The trail was quite steep, but I made good time despite a much heavier pack. There were a few spots with thick ice where I would have been happier with full crampons, but I made it past these with some care.

The summit of South Twin Mountain has excellent 360 degree views including Mt Washington and the northern Presidentials (Jefferson, Adams and Madison), Franconia Ridge, the entire ridgeline surrounding the Pemigewasset Wilderness and Owl's Head. Here are some views for you to savor. 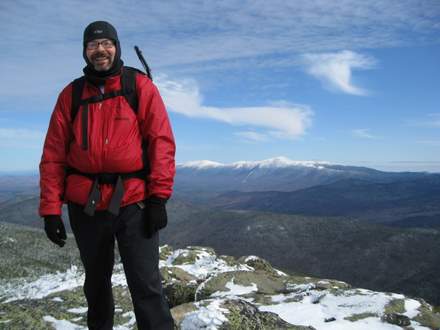 South Twin with Mt Washington (6,288 ft) in the distance 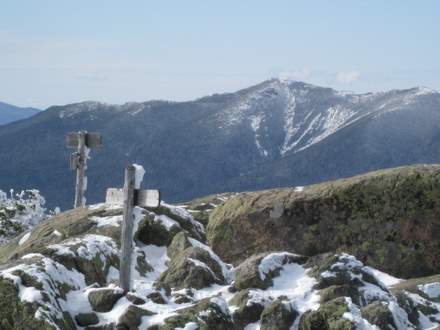 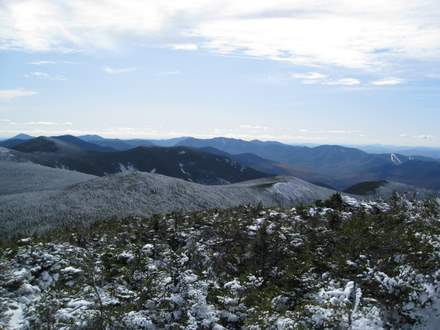 In addition to the fine views, there was virtually no wind on the summit of South Twin, so I lingered a bit. Another climbing party was making it's way up from North Twin and I waited about 5 minutes for them to arrive to snap my picture and return the favor. Besides the hut staff at Galehead, these were the only people I ran into all day. It's worth noting again, simply because winter empties out the mountains up here so dramatically.

We climbed down South Twin to Galehead Hut coming down the way I climbed up. From there, I planned to hike up a 0.5 mile side trail to the summit of Galehead Mountain. This wasn't a terribly hard climb and only required a 200 foot ascent from the hut, but the views of South Twin and the Twinway Ridge were outstanding. 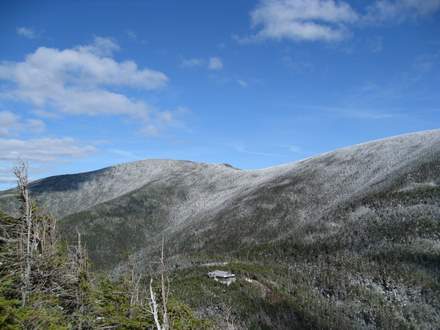 My next stop was the hut to refill my water bottles and see if I could grab a cup of extra sweet tea. Normally, the huts have potable water for hiker refills. When I arrived however, they were completely out of water and power and were melting snow on the front porch in the sun. The staff was mystified about the outage and were trying to fix it. I still had a quart of water with me, so it wasn't a big deal, and I had brought along a Frontier Pro and cannister stove if I needed to filter or melt my own.

I hung out for about 15 minutes for a rest, and chowed down on some more food. Temperatures had ranged from 24 degrees F to 65 F in the sun and with a heavier pack I was burning calories like mad. I ate some more chocolate, crackers, and some dried fruit and headed out to hike back down the Gale River Trail to my car. I got down the remaining 4.6 miles in about 2 and a half hours and drove back to Boston. That was a really nice day.