AT Section Hike: Hannover to Killington

I just got back from hiking a 44 mile section of the Appalachian Trail, starting in Hannover New Hampshire and finishing at Sherburne Pass, just below Killington Mountain, in Vermont. It was a challenging hike that I packed into 3 days, taking off Monday to do it over a long weekend. This was the last section of the AT I needed to complete in Vermont and it turned out to be much harder than I expected.

My trip started at 4:30 AM on Saturday morning when I left for Vermont. It’s about a 3 hour drive to Sherburne Pass and the Inn at the Long Trail where I had arranged to park my car and get a shuttle to Hannover, New Hampshire. The Inn is a well known hotel and pub that is friendly to hikers on the Appalachian Trail and the Long Trail.

The son of the owner gave me a ride to Hannover and dropped me off on South Main Street, exactly where my last AT section hike began a few weeks ago. This time however, I was headed south rather than north. This section would cross wide variety of terrain including dairy pastures, old growth woods, logging areas, several major rivers, country roads, two interstate highways, dozens of streams and over quite a few smaller mountains.

I started walking by 9:15 and made very good time completing the first 9 miles from Hannover to White River Junction in just 3 hours. About half of this walk was on paved roads and sidewalks and the rest was through wooded areas that were bissected by old logging roads.

The bugs weren’t too bad that first day, but it was quite warm and humid. I reached the Thistle Hill Shelter by about 4 PM and decided to stop for the night even though I still had 4 hours of light left. I’m glad I did because it started to rain at about 6:30 pm and didn’t stop until morning.

At Thistle Hill, I set up my new Grace Duo Tarp, filtered water, and cooked dinner before turning in just before it started to rain. Waking up real early for the drive to Vermont had taken its toll, and I was asleep before the sun went down at 8:15 PM. 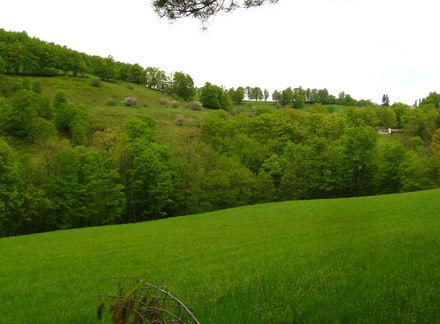 When I woke the next morning it was still raining. I had a few wet spots on my sleeping bag where water had seeped through the unsealed ridge line of my new tarp (got to do that soon) and I had a little condensation at the foot of my bag where it touched my MLD bug bivy (review forthcoming). Otherwise, I had slept soundly.

It was a bit chilly so I layered up and cooked a hearty breakfast. Instead of eating 600 calories for breakfast which is my regular morning routine, I experimented on this trip with eating about 1,000 calories including granola, chocolate, and vanilla flavored protein powder. Normally, it takes about an hour for my breakfast energy to kick-in when I’m walking, so I hoped the chocolate would give me a boost to get started and that the complex carbs and extra protein would kick in a bit later giving me sustained energy for a while. Eating this much food also requires that you drink at least of quart of water, which I don’t normally do enough of in the morning.

After breakfast, I packed up and  broke camp at 7:45 AM. Weather permitting, I was hoping to do a high mileage day and hike to the Stony Brook Shelter, about 21 miles away. It was cool and still raining slightly when I left camp so I put on my rain pants and jacket, only to remove them about 30 minutes later. As I walked, I kept singing “You Got a Friend” by Carole King. The big bwana misses his wife on these hikes.

As I hiked I could hear these mooing sounds from way off and soon I was crossing dairy pastures and climbing stiles over the electric fences they use up here to keep the critters at bay. I never actually saw a cow this entire trip mind you, nor bear or moose, although I saw plenty of poop from them all. 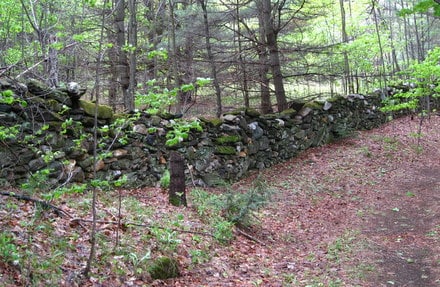 The walk from Thistle Ridge to Sherburne pass goes over many small but steep hills that are 250-1,250 ft climbs but immediately lose altitude once you summit them. This pattern goes on and on and can be quite discouraging because once you fight your way to the top, you have to apply the brakes on a steep descent.

If you’ve ever driven through Southern Vermont or up VT 100, you’ll have seen these little mountains which range between 2,000 and 3,000 ft in height, just south of the high peaks. I’d often fantasized about hiking over these myself, and here I was, doing it finally. It’s harder than it looks. 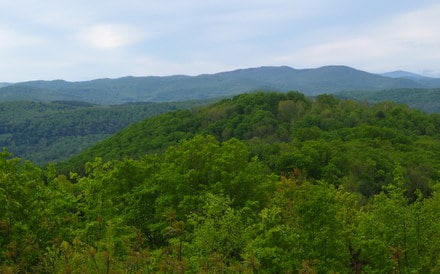 Regardless, I was cruising again, walking at about 2 miles an hours which is a decent pace for me with a full pack. I made it to Winturri Shelter by 2:30 PM in time for a long lunch break and a chance to filter some water, since I had run dry.

On this trip, I brought along the gravity based system that’s based on the Aquamira Frontier Pro water filter. To use it, you filter a bag full of dirty water to remove large parasites such as Giardia and Cryptosporidium and then treat it with chlorine dioxide tablets for 15 minutes to kill off any remaining viruses. Using a filter is a great way to shorten the time need compared to just using chemicals, since a chlorine tablets alone take 4 hours to kill the larger organisms. 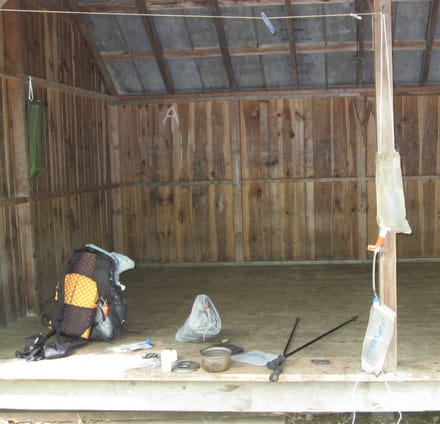 Winturrri Shelter has a beautiful water fall located very close to the shelter. I filled up my dirty water bag and assembled my gravity system. This was the third time I had used it on this trip and each time the flow rate had been intolerably slow. I thought I had debugged this issue at home, but it cropped up again on this trip.

I finally field stripped the filter, replaced the pre-filter and removed all of the output hoses to see how fast it would run, collecting the filtered water in my cooking pot. This had no effect. This was the last time I would try to use the gravity filter system on this trip.

I stood around for an hour and filtered 2.5 liters of water and called it quits. Looking at my map, I had lost precious daylight and it was unlikely that I would make Stony Brook Shelter by nightfall. I found a good spot for a stealth camp on the map, about 4 miles short of the shelter and filled up my dirty water bag with another three liters of water. There was a distinct possibility that I would have to dry camp and I wanted purified water for the evening. I dropped 4 chlorine dioxide tables into the dirty water bag and set off. 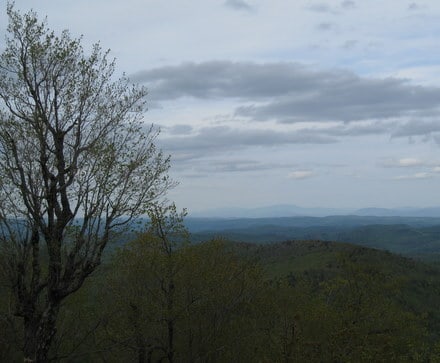 Hiking with an extra 7 lbs of water is no fun and I can finally sympathize with people who only use chlorine dioxide tablets or iodine for water purification. Next time, I’m going to listen to Tom Murphy and bring my First Need purifier instead.

After leaving Winturri, I continued to gain elevation, passing by several viewpoints with views of the White Mountains in New Hampshire. The weather continue to be very cool, about 20 degrees F less than forecast, and I had to keep up a fast pace to keep warm. I finally made it to Lakota Lake Lookout, the highpoint of the day’s hike at about 2,600 feet. From there, it was another very steep decent to Chateauguay Rd, through an ugly log harvesting area, to a pleasant stream where I set up a stealth camp for the night. 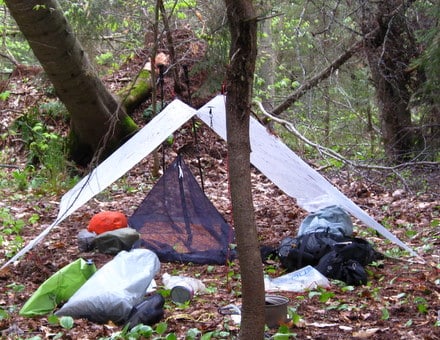 I pitched camp at about 6:45 PM, but still had to wait until 7:30 for my chlorine treated water to finish “cooking.” I set up camp and went through my normal routine of hanging a bear bag before tearing into my food. Tonight’s meal is one of my simple favorites, tuna fish packed in olive oil, augmented by a bag of Cytomax recovery drink, and a big bag of salted almonds.

I was getting really cold around dinner, so I changed into my clean long underwear and got into my sleeping bag as quickly as possible to warm up. I pulled on my Cocoon Polarguard Vest for a little extra torso warmth and cracked open a Grabber 12 hour hand warmer which I positioned between my legs just above my femoral arteries, a mountaineering trick that Chris White taught me. I put on a heavy balaclava and snuggled into my mummy bag hood and was soon toasty. That’s the last thing I remembered until the next morning.

It was chilly again the next morning, but there was no sign of a hard frost when I woke up. I ate another big breakfast and and broke camp by 8 AM. Once again, I carried extra water so I’d have more ready when my drinking bladder ran dry. I had 12 more miles of hiking to get back to my car and finish the trip. These would prove to be the most strenuous of the trip.

It took my about 2.5 hours to hike the remaining 4 miles to Stony Brook Shelter. If I had continued hiking straight through the night before I might just have made it, but it would have been a close thing. The shelter area is sort of boggy, not conducive to pitching a tarp. I think I made the better choice camping where I had.

After a quick snack, I started climbing 1,500 feet up the northern shoulder of Quimby Mountain. Quimby has 4 distinct peaks over 2,500 ft all separate by sags, so it was up and down again for the next 4 miles before the trail takes a precipitous 1,500 drop to the Ottauquechee River. 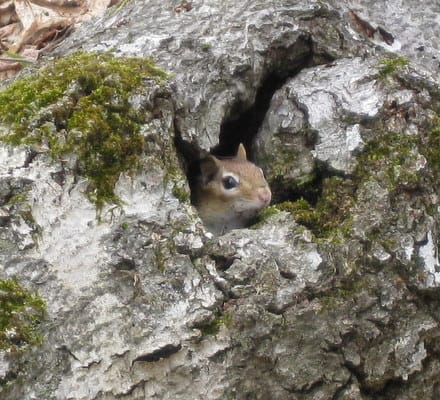 On the way down, I caught a great shot of this little guy who played hide and seek with me for a while. I waited him out until he cooperated for a portrait.


Crossing the river was a cinch. There is a newly constructed boardwalk the spans the river basin and leads to one of the highlights of this section, Thundering Brook Falls. It is magnificent. See for yourself.

After crossing the Ottauquechee, the trail gets a lot harder, resembling the rest of the Appalachian Trail in Vermont with lots of mud, rocky scrambling, and tree roots. It was comforting to be back, past all of the urban hiking, cow pastures,and mini-mountains, into terrain that I understand.

From the river basin, I had about 4 miles of hiking left before I reached my car, including a 1,500 ft ascent, making it a 4,000 ft day. This included passing through Gifford Woods State Park, the last remaining forested area in Vermont with old growth trees that hasn’t fallen victim to the rampant logging industry in the area.

From there, I climbed 1,000 ft to Ben’s Balcony, a viewpoint overlooking the Killington Mountain and Pico Peak ski areas before descending steeply 0.5 miles on the Sherburne Pass Trail which ends in the parking lot of the Inn at Long Trail, where my car was parked. That sign was a welcome sight at the end of a hard day. 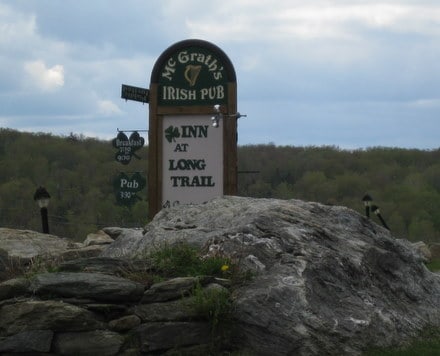 This was a good trip, but much harder than I expected. My next major AT section hike will be a 23 mile, 15 hour Presidential Traverse across 8 high peaks in New Hampshire.