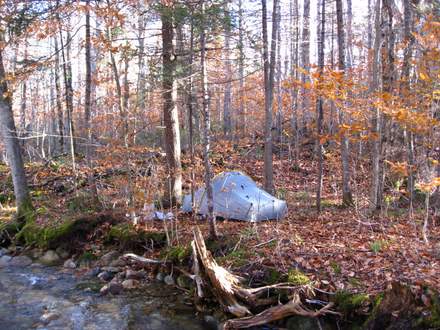 I took Friday off from work this week and headed up to the Whites for some backpacking. It's been a few months since I had a chance to sleep outdoors and I was looking forward to tryng out some new gear in the late Autumn weather. My objective for the weekend was to bag Mt. Garfield (4,500 ft) and hike a few more miles of the Appalachian Trail.

As usual, I did a careful job preparing for this hike, studying my maps and guides and carefully forecasting the weather. Proper preparation is important up here, especially this late in the season, since we only have 11 hours of daylight. This really puts a hard limit on the number of miles you can do a day, even if you break camp at dawn and eat dinner after dark.

I arrived at the trailhead just as the sun was rising on Friday morning, around 7 AM. I live 130 miles to the south, so this required a drive up before dawn, but I've been doing it for a few months, so I'm used to it. There was one other car in the parking lot, with a VFTT bumpersticker in the window and a portable refrigerator in the back seat. VFTT stands for Views From The Top, an online bulletin board pupular with very serious New England hikers and climbers, and one of my main sources for on the ground weather updates.

I packed up and got onto the trail by about 7:20 am. The summit of Mt Garfield is 5.0 miles from the trailhead with an elevation gain of about 700 meters. The trail starts out pretty easy and gets progressively harder as you approach the summit. The day started out sunny and I hiked the first 4.8 miles in almost 3 hours with a 25 lb pack. It was about 40 degrees outside, but I stripped down to a Techwick short sleeve shirt because I was sweating so much. At about 3,000 feet, heavy cloud rolled in smothering the mountain and I was forced to bundle up in my goretex jacket, hat and gloves. Visibility from there on out was awful for the rest of the day. So much for the sunny day that had been forecasted.

Two tenths of a mile below the summit, the Garfield Mountain trail intersects with the Appalachian Trail. At the trail junction, I turned left (north) onto the AT, to check out the Garfield Mountain campsite. To get to the campsite and a nice spring, you have to climb down a steep rocky slope, and then back up another to get to the campsite which is perched on the side of the mountain just below treeline. I'm sure the views are nice but visibility was about 25 yards when I got there. 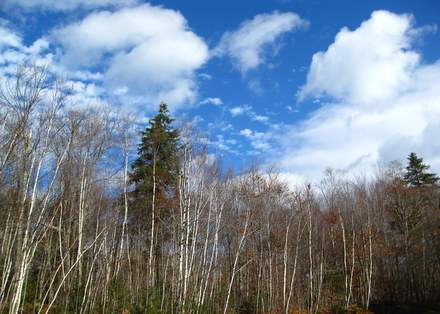 I explored the campsite area which is quite large and has a lean-to, a composting privy, and 7 large tent platforms. There wasn't a soul up there. The weather forecast called for 50 mile per hour winds that evening, and I decided that I really didn't want to spend it here, so I kept going and hoped to find a better stealth site with water on the trail. On the way up Garfield, I had seen some excellent sites at water crossings and figured they would be nice if I decided to come back down to a lower elevation for the night.

From the campsite, I continued north on the AT for another 2.1 miles until the junction with the Gale River Trail. Before I set out, I did not have any idea about how hard this section would be. It looked like a pretty flat section on my topographic map.

My first surprise was the waterfall. This is an 80 foot cascade that you need to climb down. There are lot of handholds and footholds but it is not for the faint of heart. The rock is very wet, water is cascading down right next to you, and the cloud was so thick I couldn't see the bottom. I can assure you, I was not thinking about the office!

From there, the trail was surprisingly difficult and slippery. I had to do a lot of scrambling and it took me a full 2 hours to do the 2 miles. When I made it to the junction with the Gale River Trail, I took a 10 minute break and turned around and walked back the way I came! But climbing the waterfall was a lot easier than descending it.

I filled up my water bladder at the spring at the head of the Garfield Campsite trail spur and noticed that my platypus bladder was leaking badly. I was purifiying my water with an inline Aquaguard Eliminator, which was working quite nicely, but the inside of my pack was soaking wet. Luckily I use a plastic bag as a pack liner, which kept my gear dry. I also had a spare bladder along with me, intended for storing gravity filtered water in camp, that I was able to use as a replacement bladder. That's the first time in a long time that a platy has died on me.

I had a quick snack at the spring, and then hiked back up to the Garfield Mountain Trail Junction. At the junction, I turned left (west) and continued up the the Garfield summit. It's hard to explain without a map, but the AT follows the trail here over the mountain, down, and then up to Mt Lafayette and the Franconia Ridge Trail, which I had climbed over the summer.

I encountered some ice on the short section to the summit, but didn't put on any additional traction although I had brought a pair of microspikes with me. When I got to the top, visibility was down to 10-20 yards and the winds were whipping. I zipped up in a hurry and got back down below treeline to warm up. 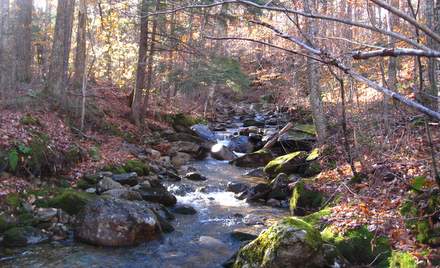 Despite the absence of a view, I was still very happy to make this ascent. It's my 30th peak on the White Mountain 4,000 footer list and the last of the high peaks on the New Hampshire Appalachian Trail. I'll still be back again for better views since I need to still fill in the 2.7 mile gap from Skookumchuck Trail to Mt Garfield before I completely finish the section between Franconia Notch and Crawford Notch. While filling in these little sections is maddening, it gives me a great excuse to drive up to the Whites week after week.

By now it was about 3:15 pm and I needed to start thinking about a campsite with darkness approaching. I decided the best bet was to head back to one of the streams I had crossed earlier in the day and so I hiked down the mountain for 2 hours and found a nice stealth site near the intersection of Scarface Brook and South Branch. I pitched my Scarp 1 by nightfall at 5:45 PM, had a nice meal, and settled down for the long autumn night.

This was my first night in the Scarp 1, a new 4 season tent made by Tarptent, and I was eager to see how it would perform in colder weather. I'll write a longer review later this week, but that first night was a dream. It rained and it was windy, but I was high and dry all night and didn't experience any internal condensation, despite the fact that I was camped right next to a stream.

I was so comfortable and exhausted from my strenuous 14  mile hike that I gave myself a lie-in the next morning, sleeping 12 hours, and only starting breakfast by 9:30 am. I guess I'm ready to hibernate.

After a nice breakfast and some excellent Starbucks Via instant coffee, I hiked out to my car and drove to my next adventure of the weekend, but more on that later.

Previous Why I Hike
Next Thermarest NeoAir Sleeping Pad