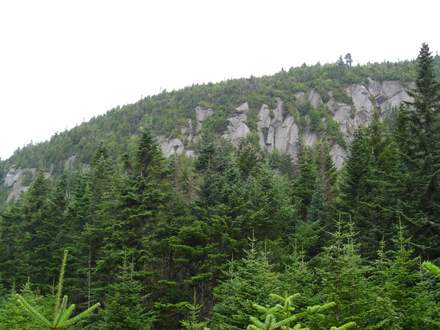 Chris and I attempted to complete a 5.3 mile segment of the Appalachian Trail on Saturday from Mt. Wolf (3,498 ft)  to South Kinsman Mountain (4,358 ft). But mid-August weather conditions were typically atrocious with very high humidity,  nearly continuous rain, and a passing hurricane, so despite hiking 12 miles round trip in 8 hours, with 3,000 ft of elevation, we only completed 3.0 miles of the trail. Regardless, we had a good time and discovered a remote, uncrowded gem in the Whites that I’m sure we’ll come back to another time.

We started our hike yesterday at the Reel Brook Trail Head off of Rt 116. I’ve had my eye on Reel Brook Trail for over a year because it looked like a moderate snow shoeing route to get to the Kinsman Ridge Trail from the west in winter, instead of the steep trails to the east facing Franconia Notch. This turned out to be a very pretty trail that parallels a nice stream for 2.9 miles before intersecting with the Kinsman Ridge Trail. The first mile or so is a very easy hike, but it gets more challenging after that, including numerous stream crossings. If you come in winter, bring crampons and an ice axe. There are some long sections that are clear enough for glissading.

At the intersection with the Kinsman Ridge Trail, which coincides with the Appalachian Trail here, you have the option to turn left (north) to hike 3.4 miles to South Kinsman Mountain or right (south) to hike 1.9 miles to the summit of Mt. Wolf. We decided to go Kinsman first and after a mile of well maintained trail, we came to the Eliza Brook Shelter. This is a nice site, right on a large stream, with a bear box, a composting privy, and a somewhat dilapidated shelter. However, the tent areas very nice and would be my choice for camping here. 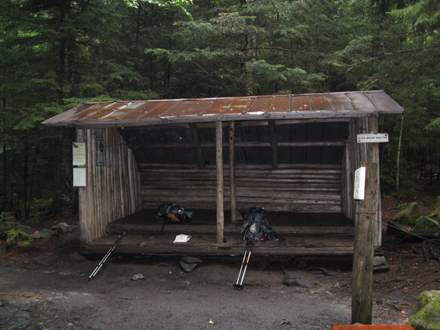 After a snack break, we continued north. From here on, the trail gets increasingly challenging as you get closer to South Kinsman, the higher of the two Kinsman peaks. For the first mile or so, the trail follows a long series of cascades and waterfalls, each with their own swimming hole at the base. It’s a fabulous, magical place, and I had no idea that it was here. 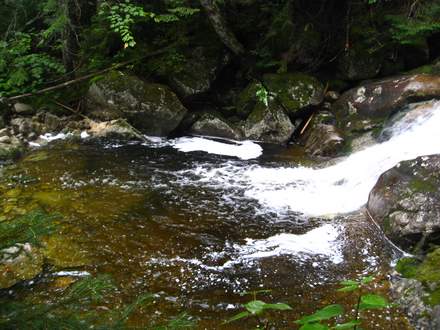 The tread way through this section devolves from well groomed trail to heavily gnarled roots bordering the cascades. It get’s increasingly hard after that turning into a boulder scramble until you unexpectedly come to a boardwalk through an alpine wetland at Harrington Pond (3,412 ft.), dwarfed by the west cliffs of South Kinsman.

My camera died at this point so I can’t illustrate the rest of our trip. But from here on, we were climbing with our hands up very wet vertical slab and boulders in light rain and mist until we came to a false summit at 4,000 ft.

I had been carefully timing our trip up to this point and it was clear that we would need a minimum of 40 minutes round trip to climb the last 100 meters of South Kinsman and get back to our current spot. Adding another 4 hours for the hike back to the car, we would arrive close to sundown, barring any unforeseen hazards along the way.

Chris was tired from all of the climbing and she encouraged me to push on and tag the peak. I was tempted, but decided that we should turn around and head back to the car. We were both soaking wet from rain and sweat in the high humidity and had started to feel cold after just a few minutes.

I wasn’t worried about hypothermia or anything: we both had full mountain hiking kit and Chris is a very experienced hiker and climber. What worried me more was the weather. It was 2:15 PM and I know that thunderstorms form on cloudy days in this section of the mountains. I had checked the high summits forecast earlier in the morning at 5:30 am and knew that thunderstorms and high wind gusts were forecast for the afternoon. We had been in constant rain and mist for most of the day and turning around then was the most sensible thing to do.

Although it was a close call, it wasn’t a hard decision to make, and it turned out to be the right one. After descending 2 miles back the way we came, the sky and trail got very dark. Unnaturally so for this time in the afternoon. Then it started to rain quite hard. If we would have continued, we would have had to climb down the difficult slab section of Kinsman in that weather, and that would have been perilous. As it was, getting down in early afternoon light and light rain had been a challenge.

Despite missing the last little section of the final ascent to S. Kinsman, we had had a nice hike. My knees held up wonderfully and I hiked most of the day without a brace, only putting it on for the last 3 miles of the descent back to the car. It was nice to hike with Chris again after a month or so apart, and we planned a 2 day trip for October in the car around part of the Pemigewasset Wilderness that neither of us have done. That will probably be the last time I see her until after ice climbing season and it will probably be the last overnight I do in the White before winter arrives.

To get to the Reel Brook Trail, drive up Rt 112 from Lincoln, NH, past Kinsman Notch. Continue from the intersection with 116 until you drive by a lovely farm with views of North and South Kinsman. Be on the look out for a hidden street sign that reads “Reel Brook” and turn right onto it. It’s a cinder road that is rough in places. Continue until you see the hiker sign. If you have a high clearance vehicle you can pull into a parking lot that has space for about 8 cars. Otherwise, there is one spot for a compact car off the side of the road.