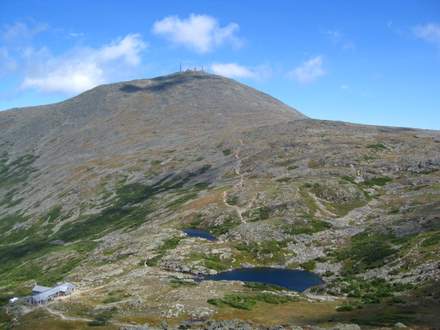 This past Saturday, I finished hiking the last section of the Southern Presidentials on the New Hampshire Appalachian Trail. The weather was incredible, with bright sunshine. However, winds on the western, exposed sections of Mt Washington (above) reached 40 miles an hour, necessitating extra layers and gloves. Total mileage for the day was 11.0 miles over 7 hours with an elevation gain of 3,500 ft. Major peaks climbed were:

This was another one of those hikes where I had to hike more miles to reacquire the AT, than I actually got to hike on it. But, I have completely fallen in love with the White Mountains this year and it is likely that I will be doing a lot of non-AT miles here this winter and next year. 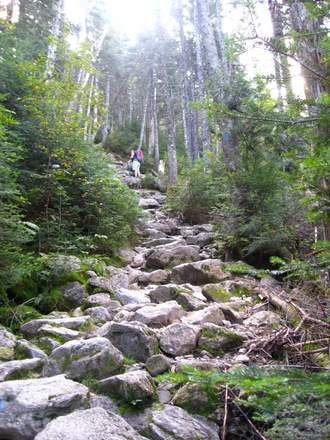 Today’s hike started on the Ammonoosuc Ravine Trail which climbs one of Mt. Washington’s western shoulders to the Crawford Path, which the AT follows in this section. The trail starts off gradually, but goes vertical after a mile, climbing 2,700 ft in 3.1 miles. The final section of the ascent climbs steep, wet rock, interspersed with small waterfalls, making the footing treacherous. The top of the trail terminates at the Lake of the Clouds hut, one of the AMC maintained White Mountain Huts. Book time for this ascent is 3 hours, but I made it in 2, despite my cranky knee.

My goal for the day was to hike up the Crawford Path from the hut to the base of the Mt. Washington summit cone, where it intersects with the Westside Trail, at 6,000 ft. This intersection is where I ended my traverse of the Northern Presidentails, in early June. From there, I’d loop back to the hut and continue down the Crawford Path over Mt Monroe and Mt Franklin, before descending by the Edmands Path, from the north side of Mt. Eisenhower. Total AT distance would be 3.1 miles.

Once I left the hut, which serves as a convenient windbreak, the wind really picked up, and I could feel my hands and ears getting very cold. I later found out that it was blowing at 40 mph. I always pack multiple layers in these mountains, so I put on a fleece hat, gloves, and a long sleeve Capilene shirt over my short sleeve Techwick shirt. I also put some Dermatone sun block on my face. 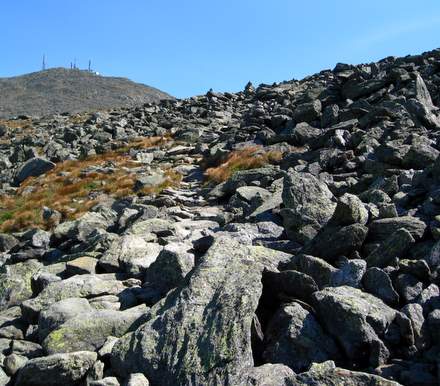 Like most of the high peaks in the Presidentials, the trail up Washington goes through a boulder field. Hiking from rock to rock requires care to avoid twisting an ankle or missing a cairn.

The distance from the hut to the Westside trailhead is 0.9 miles and I made it there in about 30 minutes. From there, the summit of Washington is only about 300 feet up, but he peak itself is unremarkable and always crowded with tourists, so I decided not to climb it. Instead, I headed down the Davis Path which goes east around the base of Washingson’s summit cone towards Bootspur Mountain (5,500 ft), one of it’s prominent shoulders. This area is called Bigelow Lawn and it is a flattish area filled with rocks and sedge grasses. It is hell in winter but was pleasant and mostly out of the wind. 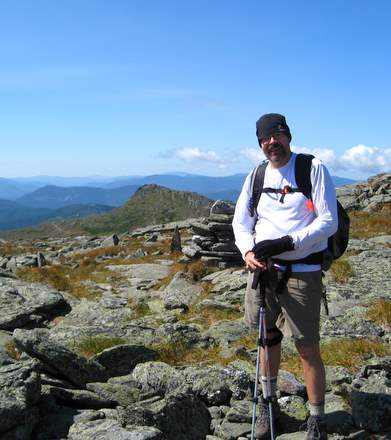 After a half mile, I headed back to the Lake of the Clouds hut, hiking back on a different path through Bigelow Lawn, to fill up my water bladder for the rest of the day. The huts all have potable water and welcome hikers passing through to stop by and hang out. 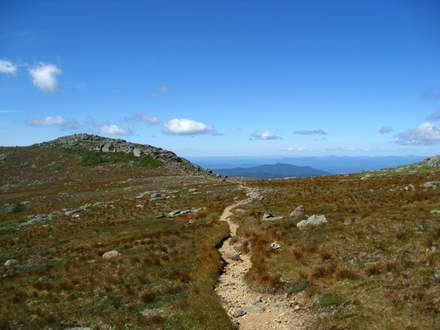 From Lake of the Clouds, the hike down the Southern Presidential ridge was fairly easy, and only required a few short scrambles to summit Mt. Monroe and Mt. Franklin, despite the fact that they are both over 5,000 ft high. 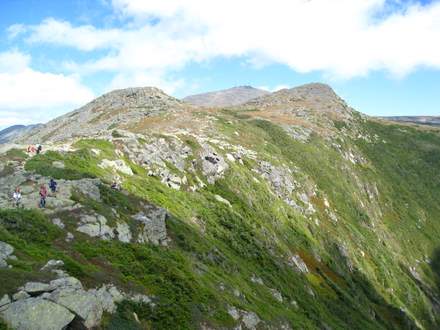 More impressive, are the drops on the east side of these peaks down into the Dry River Wilderness and Oakes Gulf, which are high on my exploration list for next year. Oakes Gulf is a large glacial cirque on the south side of the Mount Washington summit cone that resembles a vast horseshoe ringed by 5,000-foot peaks. The Dry River runs for 9 miles through Oakes Gulf and is known for its difficult, potentially dangerous river crossings, and remoteness. Very few people hike here. I like that.

I continued down the AT from Mt. Franklin to Mt. Eisenhower, which I had climbed last weekend, before getting onto the Edmands Path. This trail runs alongside the summit cone of Eisenhower’s northwest face, before gradually dropping 3 miles and about 2,000 ft to Mt. Clinton Road. It is a very nice, moderate trail, originally constructed by J Edmands, who created the Gulfside trail through the Northern Presidentials, and is memorialized at the foot of Mt Jefferson.

The descent down this trail was unremarkable except for one thing – solitude. About 2/3 of the way down, I stopped for about 10 minutes and rested my legs. As I sat there, I realized that I couldn’t hear anything but the wind through the trees: no motorcycles, no cars, no planes, nothing. How often do you experience that, even in the mountains?

The Edmands Path ends at a trail head on Mt. Clinton Road. This is a short road that provides access to all of the major trail heads that climb the Southern Presidential ridge from the west. The only people who drive on it are hikers, and moose, which I always see here early in the morning. Sunday was no exception to this: I saw a boy moose with a small rack and a girl moose as I was driving to the Ammonoosuc trail head that morning.

Upon reaching the road, I started a 2.3 miles walk back to my car at the Ammonoosuc Ravine Trail head parking lot, but I bagged a ride after about 10 minutes from a truckload of hikers headed in the same direction. I had seen this crew several times during the day and they recognized me: 5 minutes later I was at my car and on my way home.