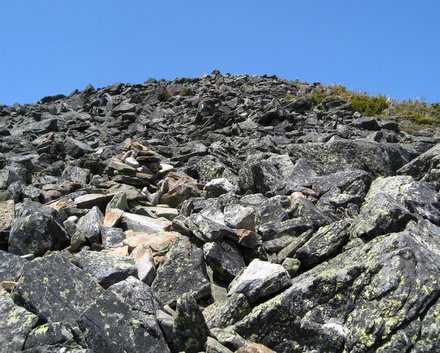 I spent an incredible 3 day weekend hiking from Zeta Pass to Mt. Washington on the Appalachian Trail this weekend, including a traverse of the Wildcats and the Northern Presidentials in New Hampshire.  It was hard hiking, with 11 miles of full exposure, but I'd have to rate this as one of my best backpacking trips, ever.

Here are my day by day mileages: 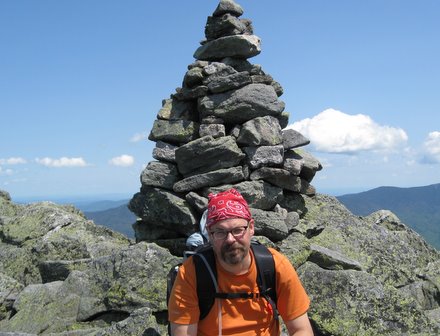 The weather cooperated beautifully this weekend with temperatures in the 60's and 70's during the day and 30's at night. The wind speed on Mt Washington and the other Presidental summits ranged from 30 to 60 mph, which is moderately low.

Given the length of this trip report and the number of photos I've included, I'm going to break this trip report into three separate posts. Day 1 is below, and here's a link to day 2 and day 3.

I woke up on Friday morning at 4:20 AM, dressed, bolted my breakfast, and was on the road by 5:00 AM, bound for the trail head. The nice thing about leaving the Boston area at this time of day is that there is no northbound traffic and I flew up Interstate 93 to the Whites. I arrived at the Nineteen Mile trail head by 8 AM, a drive of about 180 miles, and was on the trail by 8:10 AM.

My first destination of the day was Zeta Pass, to rejoin the Appalachian Trail. The section of the AT from Rt 2 to the north, to Pinkham Notch traverses three series of mountains, the Carters, the Moriahs, and the Wildcats, over 21 miles. It is very hard hiking and the White Mountain Guide recommends taking at least 3 days to do the traverse.

Two years ago, I hiked over the Carters and Moriahs from Rt 2 to Zeta Pass which separates the Carters from Mt Hight, Carter Dome, and the Wildcats, so my initial goal for the day was to hike 3.8 miles from the trail head to Zeta, and get back on the AT. 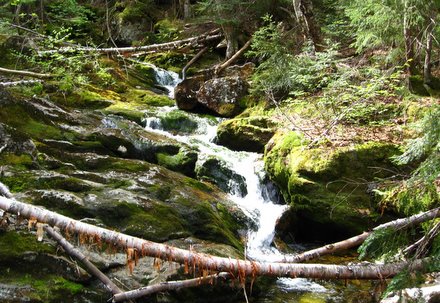 From the trail head, I followed the Nineteen Mile Trail for 1.9 miles alongside the Nineteen mile brook to the the intersection with the Carter Dome Trail. I was making good time on this moderately challenging trail and made did this stretch in an hour. The first hour after a long shuttle is always fast. 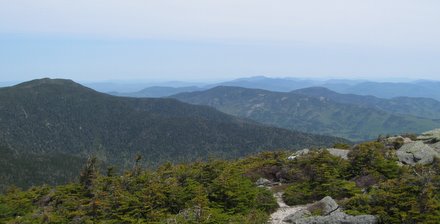 I took a long break at Zeta and then continued on the Appalachian Trail which climbs Mt Hight, sometimes spelled Height. Hight has the best views in the area of the Carter Moriah range to the north, and the Northern Presidentials to the west. It's a very steep climb, but well worth it and I hung out for a while after summiting.

From Mt Hight, I continued on the AT about a mile to Carter Dome. The trail still had some lingering snow on it, but nothing like the post holing reports I had read about from a hiker who was on it the previous week. Carter is massive, but viewless, until you come to the precipitous descent to Carter Notch and the Carter Notch Hut run by the AMC. 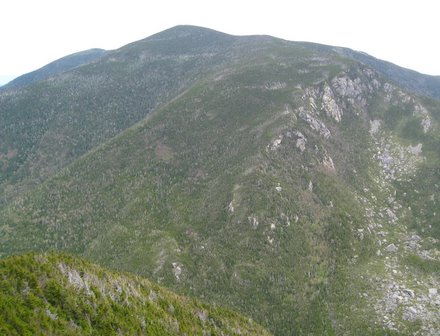 The descent which drops about 1500 feet, in a little more than a mile, is very steep, and I resorted to butt sliding in places to make it down in one piece. The picture above shows Hight, Carter Dome, and the southern shoulder of Carter Dome where it descends to Carter Notch. This picture was taken from Wildcat A, which um, you need to climb back up to attain the Wildcat Range.

Once down, I popped into the Carter Notch Hut for lunch and to refill my water. The notch has a picturesque lake which was swarming with black flies at this time of season. All of the huts in the White Mountains are run by the Appalachian Mountain Club and offer people the opportunity to sleep in the mountains, bunk bed style. They also have the latest weather forecasts and potable water, and I wanted to make sure that the weather would remain clear when I was on the Wildcats for the rest of the day.

After a feast of hot sausages and chocolate, I was back on the trail, climbing Wildcat A. There are 5 peaks on the Wildcat range, imaginatively named A, B, C, D, and E. Wildcat A is the steepest, ascending over 1,100 feet from carter Notch, in about 0.7 miles. Wildcats B and C are the dullest, with limited views. Wildcat D is by far the ugliest, with a ski lift monstrousity on its summit, and Wildcat E is by far the most difficult descent (or  climb) achieving the rank of psycho-vertical.

In fact, I'd say that my descent down Wildcat E was about the scariest moment of my entire trip. If this peak is wet or icy, it should be avoided. I can't imagine what northbound thru-hikers experience when they come to it after finishing the Presidentials. 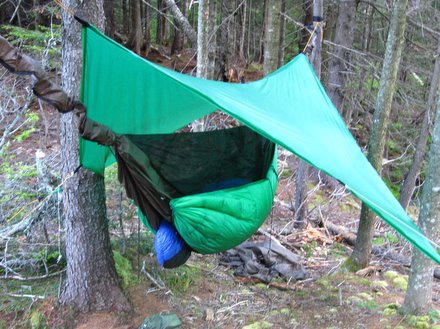 At the bottom of Wildcat E, I came to Lost Pond, and immediately started searching for a stealth site for the night. Although, I had about 3 hours of daylight left, I was beat. The black flies and insects in the pond area were horrendous, and I just wanted to camp, eat, and crash. So I hiked around the northern end of Lost Pond and bushwacked to a secluded location where I pitched my hammock. Not entirely legal, but I was very close to water.

The entire Lost Pond area is a marshy archipelago made by beavers and there is a large lodge on its western bank. It is located just across from the Pinkham Notch Visitors Center, a huge lodge run by the Appalachian Mountain Club at the foot of Mt. Washington. During the weekend, I found it amusing that no one I spoke with had any idea that this place existed, even AMC staff. The irony is that everyone is focused on Mt. Washington, on the other side of Rt 16, which is a comparative abomination with its auto road to the summit, railway line, weather forecasting towers, museum, and snack bar.

After a quick dinner of Indian boil-in-the bag food with a side of blue corn chips, I hung my bear bag, arranged my gear of the night, climbed into my hammock,and was asleep by 8 PM.