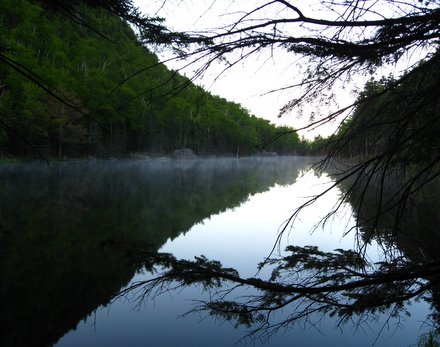 This post details day 2 of my AT section hike from Zeta Pass to Mt Washington. You should read about day 1, if you haven't already.

I woke up at 6:00 AM on Saturday, in time to see the mist rising from Lost Pond. I started up my alcohol stove, a Vargo Triad XE that I was field testing on this trip to make some coffee, and ate 3 servings of cold crunchy cereal from a freezer bag.

I had slept well most of the night, but was a little chilled in the morning. Temperatures for the weekend were running about 10 degrees cooler than I expected, down into the 30's F, which is starting to get borderline for a hammock, even with the down under-quilt which I had brought along.

When I woke up, my route for the day was far from decided. I had the option to climb Mt Washington first and then to circle around the Great Gulf to Jefferson, Adams, and Madison or to start with Madison and hike the other way around. I was very interested in completing an ascent of Washington on this trip after failing to summit last January on a winter climb. On the other hand, I was here to hike the Appalachian Trail and do as many miles on it as possible before the end of the weekend. If I was to leave the trail to climb Washington and the weather turned for the worst – a distinct possibility – I could lose an entire day and put the entire 3 day weekend in jeopardy. 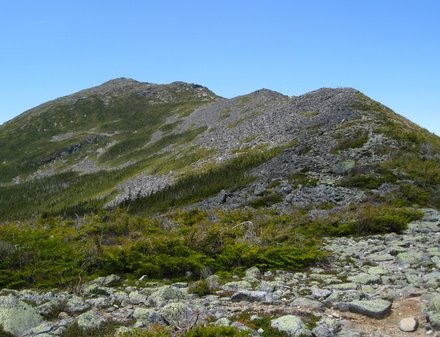 In the end, I decided to continue on the AT and hike Mt Madison first since it is the next peak along the trail, heading southbound. It's over 1,000 ft lower than Washington and has a lot of good bail out routes in case a storm comes up suddenly. I was also the most comfortable with this mountain and it's surroundings. The prior weekend, I had hiked up to the Madison hut, from the Appalachia trail head, at the beginning of a Presidential Traverse attempt with a group of peak-baggers. A Presidential Traverse is a 23 miles hike, encompassing the Northern Presidentials (Madison, Adams, Jefferson, and Washington) and the Southern Presidentials (Monroe, Franklin, Eisenhower, Pierce, Jackson, and Webster) in 15 hours. These are big mountains and Presidential Traverse attempts fail more often than not. They're also attempted and completed in winter, which is probably insane.

To make a long story short, I made it up the 4,100 ft ascent to the Madison hut in 3 hours with this group, but was not feeling all the great at the time, and decided to bag the rest of the hike. I was joined by 2 other people from the group of 11 and we had a breath-taking descent down the Airline Trail, which took another 4 hours. The Airline Trail is the most direct way to the summit of Mt Adams from Rt 2 and I climbed the upper part of it again on Sunday.  The rest of the group continued over Madison, Adams, and Jefferson before being forced to descend the Jewel Trail on the slope of Mt Washington, due to thunderstorms.

Anyway, that experience gave me a really good feel for what awaited me on Madison in terms of terrain, water sources, camping, and bail out options which increased my confidence level for my second solo attempt. If there is a lesson to be learned from that experience, it is that I'm not a peak-bagger, but a long distance trail hiker. If there's a mountain in the way, I'll hike over it. That's not always true, but it is the standard I try to apply during my multi-day solo hikes. 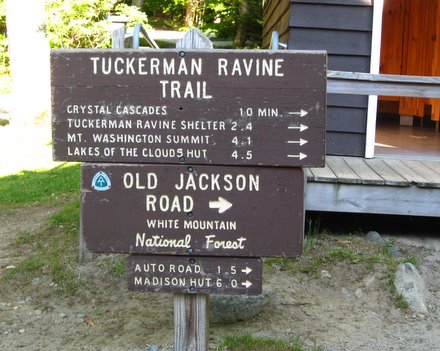 I set out from Lost Pond by about 7 AM and came out of the woods about 20 minutes later at Rt 16, directly across the road from the Pinkham Notch Visitors Center. I walked to the basement of the main building where they keep the weather forecasts and to sign-in for my hike. A lot of people start hikes in this area and never sign in, but it's a habit I have, especially when hiking solo. I enter my name, emergency contact info, planned route, date and start time in case someone needs to track me down if I'm overdue. I figure it also helps with their funding if they have a usage census.

The weather forecast said the same thing it said when I checked it at Carter Notch the day earlier: partly cloudy with a slight chance of afternoon thunderstorms. With that, I headed back outside and started walking the 5.5 miles toward Madison on the Old Jackson Trail which makes up this section of the Appalachian Trail. After that the AT continues along the Madison Gulf Trail, crosses the West Branch of the Peabody River and then cuts over to the Osgood Trail where the real climb up Madison begins.

What was astonishing were the number of stream crossings along the way. I stopped counting at 25. It was incredible. The White Mountain Guide always says "last reliable water" and then you cross lots of streams. Happens all the time, and the only thing you can really rely on in recent local knowledge and the big blue lines denoting major water courses on your map.

I made it to the Osgood Tent Site on the eastern boundary of the Great Gulf Wilderness by 10:30 AM. This boundary is significant in that you can camp outside of the Great Gulf but not inside it, at least legally. You also can't use any power tools in a Wilderness Area, which is why a lot of the trail maintenance is performed using an axe and not chain saws. 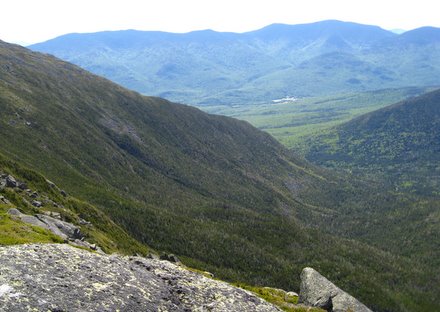 The Great Gulf is the drainage area surrounded by Mt Washington to the South, Jefferson to the west, and Adams and Madison to the north. These are massive mountains, all over 5,000 ft, and their shoulders slope precipitously into the Gulf which is a huge forested area. The summits themselves are covered in huge boulders that make hiking across them extremely hazardous. One false step and you can easily break and ankle or leg. I spent a lot of time this past weekend in pure target acquisition mode, thinking about foot placement. If you are having trouble mastering walking meditation, a form of buddhist meditation, I suggest you try it in the Northern Presidentials. You need to remain vigilantly in the present and rid yourself of "wandering mind" if you want to make it through the experience intact.

There were two very distinct stages to the Madison climb: the below treeline experience and the above treeline experience. Below treeline, Madison is a challenging, steep, rocky climb through beautiful woods. It was steep, so I kept my head down and only looked at the ground a few feet in front of me as I climbed, taking frequent rests to catch my breadth. I had this idea that I had been testing all weekend which was to take many small steps instead of big steps, using my calf muscles as much as possible instead of my quads and glutes to preserve my energy. The idea is to carefully plan your foot placements to ascend about 6 inches each step instead of 1-2 feet. It doesn't work on all ascents, but it seemed to be very effective below treeline (4,000 – 4,500 ft), the entire weekend.

Once I got above treeline, hiking up Madison was like climbing on the mountains of the moon. A lot of people ascend Madison from the north on the Valley Way Trail and only climb the last 500 feet or so in the open. I was ascending on the Osgood Trail from the north, which required that I climb the exposed eastern shoulder before reaching the summit cone. The weather was beautiful so this was not a problem, but the ascent was murder on my legs and my mind… 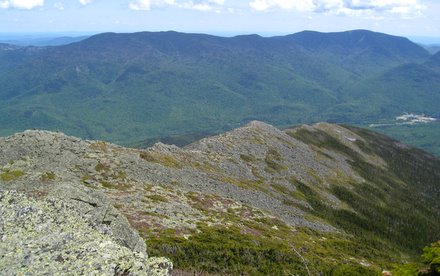 When you break treeline, there are twelve small mini peaks which curve to the left in a crescent toward the summit. You can't see the next until you ascend the one before it. Looking back, I knew that this sequence had to end sometime and it was just a matter of time until I came to the summit. Frankly, this climb up Madison was my favorite one of the 11 major peaks I climbed this weekend.

Once I got to the top, I hung out a little and enjoyed the view. The black, bare rock of the mountain was radiating heat like an oven and it was nice to bask in the warmth. The wind was not blowing very hard on the summit, but really picked up the next day.

I didn't linger too long and made the 500 foot descent to the Madison Notch hut where I had a short break and considered my next move. It was only 3:30 PM and I had the option to continue over Adams to a lean-to called The Perch below Thunderstorm Junction, see if they had a spare bed for the night at Madison Hut or hike down to the Valley Way tent site about 1,000 feet down and call it an early day.

Frankly, I was beat and decided that I didn't have the energy to climb another summit and cover a few more miles that day. I wasn't willing to shell out the $80 for a night on the hut, so I hiked down the back of Madison and found the tent site I passed last week on the Valley Way trail. It had two large tent platforms, a privy, and a small spring, as well as an overflow area for additional campers. I arrived there at 4 PM and hung my hammock in one of the overflow sites, away from any potential noise. I wanted to crash early and get up at dawn for an early start. 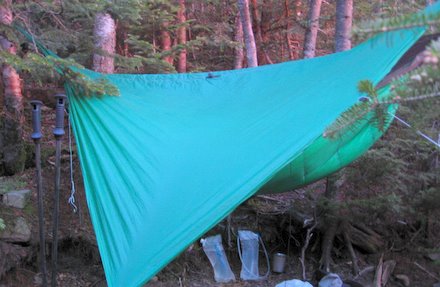 Some more campers drifted in at about 6 PM, just as I was finishing dinner and watching black clouds hover over the summit of Madison. I was glad then that I hadn't continued over Adams and The Perch because I'd still be out there. I was asleep by 7:30 PM. It had been a glorious day.