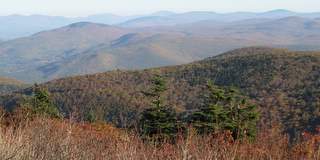 The weather on this trip was simply fantastic. Daytime temperatures were is the 60's with nighttime temperatures dipping down into the low 40's. It was sunny every single day without a cloud in the sky: perfect Indian summer weather. Plus the fall foliage in Western Massachusetts and Southern Vermont was great: a little past peak, but not much.

My backpacking friend Quoddy shuttled me down from Rt. 9 in Vermont to the trail head in Dalton and I was on the trail by 9:10am. He, and my friends Wysteria, Sherpa and I had finished the October Mountain section of the Appalachian trail south of this point in April, almost 6 months earlier.

The woods north of Dalton were just past peak fall foliage and the ground was covered with a kaleidoscope of yellow and red leaves. This obscured the trail so I had to be on the ball and watch out for blazes and the subtle trail boundary cues left by trail maintainers to stay on track. Still, After hiking on the northern half of the Long Trail for the past couple of months, hiking on the Massachusetts Appalachian Trail again was downright easy and I covered ground at a fast 2 miles an hours for most of the day. 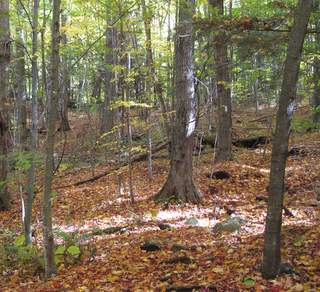 My goal on Day 1 was to reach the Mark Noepel Lean-to, south of the Greylock  summit. This required two ascents, first up North Mountain and then up to the Lean-to for a total of about 2,500 ft. After climbing North Mountain, I descended again to the town of Chester and walked through town, a cornfield, and pasture land before entering the woods again at the southern end of Greylock.

If you're unfamiliar with the Appalachian Trail, it cuts through many small towns on its route providing opportunities for resupply and a shower. The AT goes right past the Chester Post office, also making it a convenient spot to pick up a mail-drop. 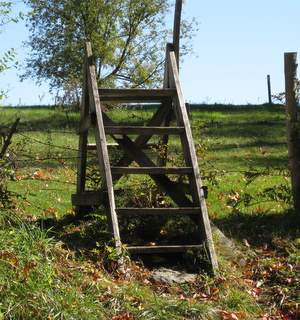 After walking through Chester, I took a lunch break next to a pasture on a pretty country road before starting my ascent up Mt. Greylock. I sat on a ladder that private land owners often erect to help hikers climb over the barbed wire surrounding their land and loaded up on some calories.

After lunch, I started climbing the 1,500 feet to the Lean-to, spread out over a distance of about 3 miles. After 3 pm, the weather started to cool off a bit and although my water was low, I decided to wait until reaching the Lean-to before filtering a refill. However, when I arrived at the shelter, the water source was completely dry. This was not good. So I got out my map and started looking for other streams on Greylock where I might find water. Sundown is at 6:30 pm at this time of year, so I had to find something before dark.

I had passed a two small streams a few miles to the south that I knew had water, but I decided to continue north instead. Greylock has a number of additional Lean-tos and camping areas on it, that are not part of the Appalachian Trail system, and I reckoned I could find water at one of those. Situations like these are one reason why it is prudent to take very good maps with you whenever you go backpacking.

Along the way, I came across several streams with water. I stopped to filter at two of these but the water was very brown when it came out of my filter due to the tannins in the leaves that choked both of these streams. I've drunk this kind of water before and my filter is exceptional at removing organic contaminents, but I decided to hold this water in reserve and still seek better.

I finally arrived at Peck's stream around 6 pm and found the clear water I had been looking for. I filtered 3.5 liters and then set out to look for the Gould Trail Lean-to on the map. I never found it and I assume it's because I have eight year old ATC maps or because it's been torn down for renovation. The entire Greylock trail system and scenic road have been undergoing extensive renovation over the past 2 years, so this made sense. 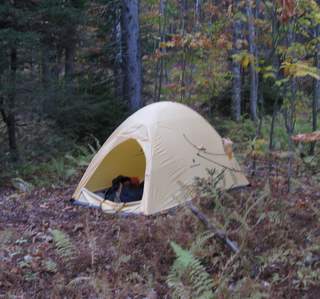 So I hiked down the trail a ways and pitched a stealth camp in the woods about 50 yards east of the trail. It was about 6:30 pm at the point and I had about 15 minutes before sunset to get situated. I cooked a quick dinner of Annie's macaroni and cheese shells and fell asleep by 7pm. I was beat.

I woke up at 6:30 am, just before sunrise, and was back on the trail after a hot breakfast by 8:10 am. I stopped at Pecks Stream again on my way up the Gould Trail to top off my water and then continued up and over the Greylock summit (3,491 ft). It was another beautiful morning and I had 50 miles views from the summit. 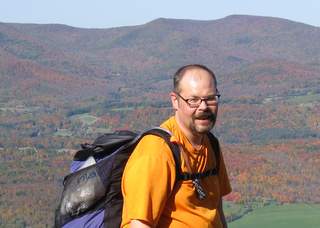 My goal for the day was to reach the Seth Warner lean-to and camping area in southern Vermont about 14 miles away. This required a 3,000 ft descent down Greylock and Mt. Williams to North Adams, followed by a 1,500 ft. ascent over Eph's Lookout to the Massachusetts-Vermont border. The state border is also the southern-most terminus of the Long Trail, which coincides with the Appalachian Trail for 92 miles though southern Vermont before branching off and continuing to Canada.

After the easy ascent up the southern side of Greylock, the descent became a little harder with a lot more rocky bits. Along the way, I met a lot of day hikers and backpackers and warned at least one group that had planned to spend the night at Mark Noepel Lean-to about the lack of water there. If you're looking for solitude, I'd definitely recommend staying away from the north face of Greylock and hiking up it from the south.

The decent down Greylock passed uneventfully until I got to the Mt. Williams overlook. It's easy to get turned around here and I caught myself walking back up to Greylock after about a tenth of a mile, before I noticed the trail was not heading west the way my map had said it should.

I made it down to North Adams by lunchtime, and walked through a residential area, crossing bridges over the Hoosic River and train tracks before heading back into the woods at Sherman Brook. The trail is well marked through town. 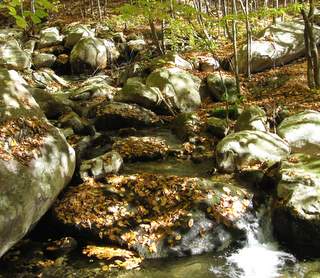 I refilled my water bladder at Sherman Brook, a really wonderful stream that parallels the AT up to the state line. There are lots of good pools here for swimming and sunning in late summer.

From North Adams, the AT ascends about 1,500 ft to Eph's Lookout where it intersects with the blue-blazed Pine Cobble Trail after a strenuous scrabble up a talus strewn slope. The intersection of these two trails is a little confusing: just head east and you'll find the white blazes.

The walk from Eph's to the state line and then Seth Warner is a fairly flat ridge walk. Along the way, I passed the Long Trail terminus sign at the border and spotted a moose hanging out looking for handouts. 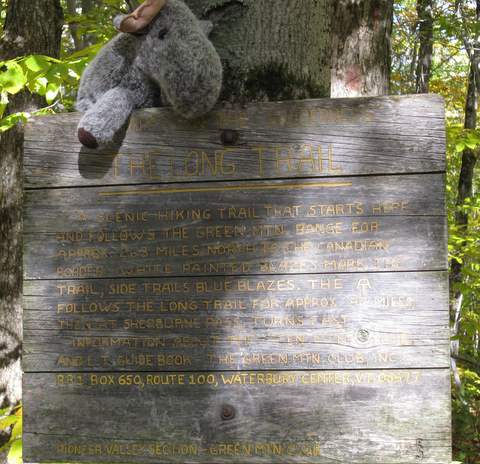 Funny, as soon as I started hiking in Vermont, I began to encounter mud on the trail. It wasn't that bad at this time of year, but I can easily imagine it being a lot worse in late spring. I continued on, making it to Seth Warner by about 4:30 pm, where I pitched camp, had a big dinner and crashed early.

I woke up at 6:30 am again and my first thought was "I wish I could take a zero day." My quads were pretty exhausted from the two previous high mileage days, but once I got out of my bag and had breakfast going I was looking forward to another day of hiking again.

On this trip the weather was a little on the cool side at night and I had decided to sleep in my Black Diamond Firstlight, a single wall tent that I'd purchased this year for early spring and autumn camping. It's made out of EPIC fabric, making it very breathable without the airflow you find on tarp tents, and a lot of people use it for 4 season camping and mountaineering for this reason.

I broke camp by 8:00 am and was on my way. My destination for the day was the Rt. 9 trail head, where my car was parked, about 11.5 miles north. The biggest ascent of the day was about 750 feet up to a power line just north of the Lean-to. I hiked up that and descended to Roaring Branch, which I have to assume is one of the tepid streams I crossed along the way. They must be more impressive in spring flood.

The trail continued past a beaver pond with an impressively large beaver lodge and up Consultation Peak, a small hill, where the early builders of the Long Trail would meet to plan trail construction and maintenance work. The grade up Consultation was so slight that I only realized that I had climbed it after I was much further down the trail. 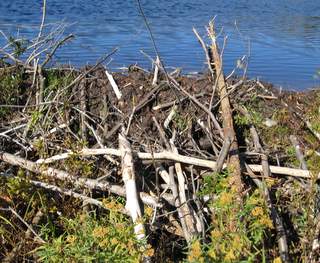 From Consultation peak, the trail descend slowly to Congdon Shelter, another Lean-to situated on Stamford Stream, a significant watercourse. On the way, the trail passes Sucker Pond, another impressive beaver pond, and a partially submerged boardwalk parellels the wall of the beaver damn itself. This doesn't seem like a good idea: I've heard stories of hikers being drowned when other beaver damns have given way and killed people down slope. Still it was neat to see the damn wall from arm's length.

When I arrived at Congdan shelter is was about 12:30 pm and I had been making good time again at just under 2 miles an hour. I stopped and had lunch with two backpackers from Cleveland, Ohio who were doing a 7 day section hike up to Mad Tom Notch, just past Bromley Mountain.They were justifiably reveling in the fine weather, given Vermont's wet reputation.

I finished my lunch before them and took off, eager to get to Rt. 9 and drive the 3 hours back to Boston before dark for a celebratory barbecue and beer. From the shelter, I had a short 400 ft. ascent on the way to Harmon Hill, a popular viewpoint frequented by locals from the Bennington, VT area. The transition from the AT/LT to the park-like old growth in the Harmon Hill area was a little unnerving after roughing it for 3 days, and I started seeing lots of day hikers again. 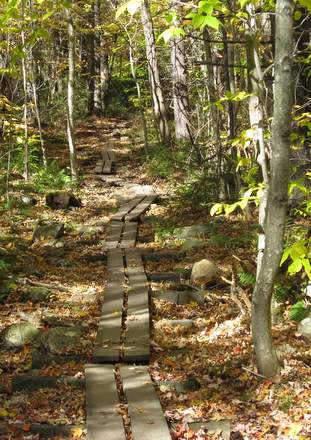 I'm actually impressed that people causally climb Harmon Hill. It's not exactly an easy climb with or without a backpack. From the summit I had to descend about 1,000 ft., 600 of which were knee grinding stone steps set into the hill face by some dedicated set of trail maintainers. But it's certainly a beautiful hill with outstanding views and a great place for locals to come for a nice hike.

After finishing this decent, with my quads, burning, I came to the most dangerous part of my trip, crossing Rt.9 to my car, parked at the trail head parking lot. I kid you not. Rt. 9 is an exceptionally scenic road, but people like to race their Harley's and BMW's on it so take care when you cross the four lanes of traffic here.