Backpacking a McCrillis Loop with Guthook 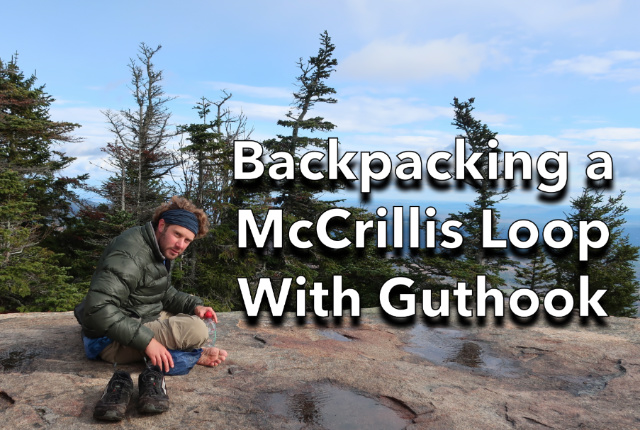 My friend Guthook (Ryan Lynn) and I try to get together every few years for a backpacking trip to reconnect and catch up. We’re in touch online, but there’s nothing like getting out into the woods, climbing a few mountains, and camping out for getting to the heart of things. On this trip, we climbed Mts Passconaway and Whiteface, two 4000 footers in the Sandwich Range of the White Mountains, making it into a one-night backpacking trip by looping back around on two lesser hiked trails called the McCrillis Trail and the McCrillis Path. We’re down to 11 hours of daylight in New Hampshire, so it made sense to sleep out rather than trying to hike the entire 16-mile route in a day.

We’d originally planned on climbing the southern Presidential Range before dropping down the Oakes Gulf Headwall into the Dry River Wilderness, but old man winter put a nix to that. So we redirected to the southern part of the Whites where conditions were still autumn-like. It’s a good thing we did because the Presidential Range got 7 inches of snow with winds gusting to 80 mph, which was definitely not the mellow wilderness experience we were wanting on this trip.

Guthook is no stranger to the White Mountains, which is one of the trail systems available in FarOut’s White Mountain National Forest trail app (formerly named Guthook’s Guide) because he’s hiked most of the trails in order to collect up-to-date trail and water source information for it. Still, my goal in planning this loop was to pick something off the beaten track but still easily accessible for Ryan, who was driving down from Maine. We both like wandering out of bounds, as it were, and this route combined the solitude, scenery, and challenge we both enjoy.

Most White Mountain hikers have probably never heard of the McCrillis Trail or the McCrillis Path. They access a largely trail-less region of the National Forest that lies between Snows Mountain in Waterville Valley, the Sleepers, and Flat Mountain Pond, although you can also use them to create a long loop hike over Mt Whiteface. I’ve hiked and bushwhacked fairly extensively in the area, but it’d been a while since I’d slept out there on a backpacking trip.

Ryan and I met at a reasonable hour at the Ferncroft Trailhead. It was about a week after peak foliage in the Whites, but the scenery was still quite colorful. We were both still wearing trail runners for this trip, but it was still a shock to encounter snow and frozen mud higher up on our route. I love winter hiking but it seems like autumn was just too short this year.

The plan was to get the hard stuff out of the way on day one by climbing Mts Passaconaway and Whiteface, which are connected by a long curved ridge. From Whiteface, we’d drop back down to the forest and camp somewhere near Whiteface Brook before finishing the loop the next morning.

We headed up Dicey’s Mill Trail which climbs steadily to Camp Rich, the site of an old shelter, that is now a heavily used tent site. There’s a water source there so it’s a natural place to camp. We continued the short distance to the summit, passing the snowline at 4000′. We hiked the short spur to the summit cairn before backtracking and hiking out to the Passaconaway View Spur, which must be the longest 0.3 miles in the world. It was a foggy day, so there were limited views of Sawyer Pond far below.

The Passaconaway View Spur Trail is actually the top of an old abandoned trail called the Passaconaway Slide Trail which you can still find and follow from the Downes Brook Trail if you’re very motivated. It’s not a maintained trail although you can still find some cairns marking the route. I bushwhacked it in 2017 with a few friends right after I finished hiking my first round of The White Mountain Guide (formerly called Redlining).

We backtracked down Passaconaway to Camp Rich, which Ryan wanted to investigate further, before filtering some water and having a bite to eat. We then set off on the Rollins Trail towards Mt Whiteface, following the ridge that demarks “The Bowl”, the steep-sided, amphitheater-shaped valley that lies between Whiteface and Passaconaway. The day had cleared and we were treated to a nice view of the Passaconaway summit from the ridgeline, with a view of Mt Chocorua in the distance.

We walked right past the Whiteface summit since we were chatting and it’s easily missed. It’s marked by a small cairn, barely knee-high, and isn’t located at the top of the Blueberry Ledge Trail where many people mistakenly think the summit is. We only realized that we’d passed it when we came to the Kate Sleeper Trail Junction. No worries.

A few steps further on and we came to a series of open ledges and the McCrillis Trail Junction. It was sunny if a bit brisk, so Ryan took off his shoes to dry off his feet (old thru-hiker habit) and we soaked in the views. From here we hiked down the McCrillis Trail, which is open ledge at the top and was quite slippery from the rain. It moderates quickly though and travels several miles through the forest to a crossing over Whiteface Brook.

I had expected to have to ford the river, but the crossing was rock-hoppable. We bushwhacked downstream a way and found a place to camp.  I was pretty impressed with the section of Whiteface Brook below the river crossing and made a note to come back next spring for some fly fishing. The trout habitat is out of this world, with numerous pools, pour-overs, and giant boulders in the streambed. I’ve caught trout higher upstream below Flat Mountain Pond, but the downstream area looks far more enticing.

Ryan has brought his beloved MSR Whisperlite Classic Stove to cook dinner and fired it up. He’s owned the thing for 15 years and knows how to field strip and repair it like a pro. When we first met, he was still working as a NOLs backcountry guide, where liquid fuel stoves are the norm and all the guides swear by them because they’re field repairable. While isobutane canister stoves are more convenient and lighter weight, you could argue that a liquid fuel stove is a more ecologically sound way to cook in the backcountry because the fuel container is reusable and doesn’t end up in a landfill. The liquid fuel burned by these stoves is essentially unleaded gasoline, although there are Whisperlite models that will burn also jet fuel, diesel, and kerosene.

With sunset at 6:00 pm, we turned in rather than trying to stay up in the dark. Neither of us are big on campfires, and we were both happy to crash early. I’d brought my hammock and Ryan had brought a tent, one of the first second-generation Gossamer Gear Ones, when they were made with green fabric.

There was a brisk wind that night and I kicked myself for not bringing a winter sock for my hammock to help retain more of my underquilt warmth. I slept warm enough, but not quite as comfortably as I have on recent trips. I don’t have any overnight trips planned for November, but if I do go backpacking I suspect I’ll move to the ground and bring a tent instead.

We woke up at sunrise the next morning and had a hot breakfast. I drank two pots of hot tea because it’s the only way I can get myself to drink enough water when it’s freezing outside.  We still had about 6 miles left on our route, but it was easy walking with little additional elevation gain.

The end of the McCrillis Trail runs through conservation land adjacent to the National Forest before ending at the Whiteface Intervale Trailhead. From there, it’s a short road walk along a deserted backcountry road to another conservation parcel where the McCrillis Path begins. There’s excellent signage pointing the way.

The trail runs past a narrow and rocky gorge before following an old logging road back to the Blueberry Ledge Trail. The route is easy to follow most of the year, except when autumn leaves obscure it. Ryan and I didn’t have any issues following it because we’re experienced at following badly marked and obscure trails, but it’s something you should be aware of if you try to hike it without a GPS app, like Guthook’s Guide (oops, the FarOut Guide) to follow. We soon came to the Blueberry Ledge Trail and followed it back down to the Ferncroft lot.

I always enjoy these backpacking trips with Ryan because we like a lot of the same things about backpacking, like hiking off the beaten track, and there’s always a lot of stuff for us to talk about. While we might not see each other for years at a time, it’s easy for us to pick up where we left off and enjoy each other’s company again. It’s nice having friends like that and the hiking is just the icing on the cake.

Editor's note: If you’re thinking about buying gear that we’ve reviewed or recommend on SectionHiker, you can help support us in the process. Just click on any of the seller links above, and if you make a purchase, we may (but not always) receive a small percentage of the transaction. The cost of the product is the same to you but this helps us continue to test and write unsponsored and independent gear reviews, beginner FAQs, and free hiking guides. Thanks and we appreciate your support!
Previous Decathlon Forclaz Trek 100 23F Down Packable Puffer Review
Next 10 Tips for Climbing Mt Washington in Winter